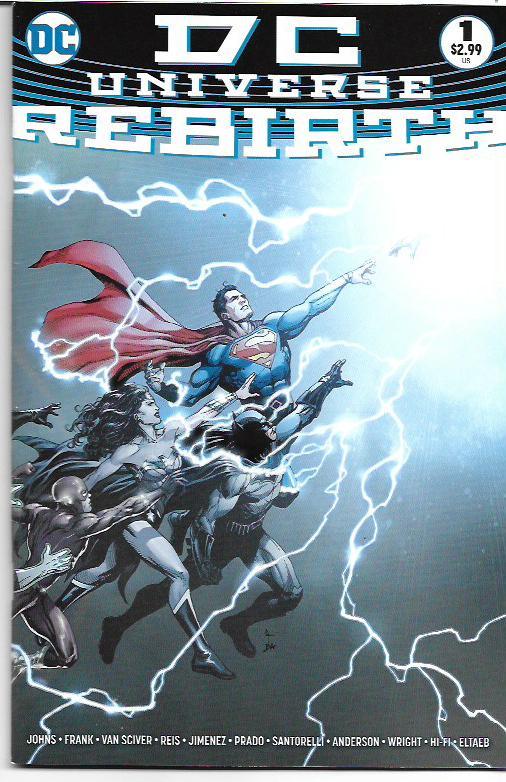 Now that is not an unusual question to be asked of someone like me, a comics professional and writer about comics for well over forty years.  What is unusual was that I was asked the question at G-Fest, a glorious Godzilla convention, and PulpFest, a terrific gathering of pulp magazine collectors. As I’ve been saying for some time now, even people who don’t follow our beloved comic books closely have a familiarity with them.  Even if that familiarity comes from news and other mainstream sources.

My familiarity with Rebirth comes from having read the first month of the involved titles. I don’t often read news articles or opinion columns on things I’m likely to read. I suppose I could ask my new friends at DC Entertainment to explain Rebirth to me…and I might do that soon…but, here, I’m going it alone.

DC Universe Rebirth strikes me as a soft reboot of the DC Universe most recently represented by “The New 52.” Some unknown person has been playing with reality. What we have at the moment seems to be a DC Universe which has some elements of the traditional universe and some of “New 52″ universe. I find this interesting. I want to see how it all shakes out.

There also seems to be a more optimistic atmosphere to the Rebirth titles. As I have always felt the super-hero genre is, at its very heart and soul, an optimistic one, that’s a good way to convince me to buy and read these comic books again.

DC Universe Rebirth #1 [$2.99] kicked off this new chapter for the Universe. It was written by Geoff Johns with stunning art by Gary Frank, Ethan Van Sciver, Ivan Reis and Phil Jimenez. It contains 63 pages of story and art, which, at today’s comics prices, is a great buy for three bucks.

I’m not going the review route per se this week, but I will touch on some of the appealing and/or interesting things in the issues I have read. Most of these issues have gone into multiple printings, so they shouldn’t be too hard for you to track down.

There seems to be a link to Watchmen, the landmark limited series by Alan Moore and Dave Gibbons. I surprised myself by being pretty much okay with this. Moore seems to have divorced himself from the property completely and Gibbons, who seems a mite miffed about this possible use of the characters, was okay with the Before Watchmen comics of a couple years back. I think what convinced me not to be upset was a comment from Marvel’s Tom Brevoort. While agreeing the original Watchmen series was complete unto itself, he said that if Marvel had owned the property, they probably would have brought the characters into the Marvel Universe a decade ago.

“Everything you thought you knew is a lie” is a common and seldom completely truthful come-on for super-hero stories. However, in the case of DC Universe Rebirth. It does appear a great deal of what we (and the heroes) know about the “New 52″ universe was a lie or, at least, a manipulation of reality. Wally “Kid Flash” West is back. A very old Johnny Thunder is screaming for his thunderbolt. Ryan Choi may be back as the Atom. Someone with a Legion of Super-Heroes ring is looking for Superman. The young Blue Beetle is working with Ted Kord. Green Arrow and Black Canary, who barely knew each other in the “New 52,” feel a connection with one another. And someone is watching our world with Batman knowing something is going on that isn’t right. I’m intrigued.

In Batman Rebirth #1 [$2.99] by writers Scott Synder and Tom King with artist Mikel Janin, Batman seems more sane than he has in too many years. I like that. Duke, the “Robin” whose parents remain in a mental hospital due to their exposure to Joker gas, is coming to work for the apparently integrated Bruce/Batman and not as another Robin. I like that. And there’s also a positively unsettling take on the Calendar Man.  I like that, too. I’m feeling better about the Batman after reading this.

In Green Arrow Rebirth #1 [$2.99] by writer Benjamin Percy with art by Otto Schmidt, Green Arrow and Black Canary are exploring their mutual attraction. Some of the conversations between them, mostly about Oliver Queen’s wealth and self-proclaimed status as a social justice warrior, lands with loud clunks. The points are made, but the speeches are unnatural. 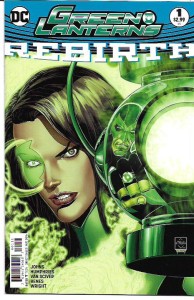 Green Lanterns Rebirth #1 [$2.99] by Johns and Sam Humphries with art by Van Sciver and Ed Benes focus on rookie lanterns Simon Baz and Jessica Cruz, who neither like nor trust one another. They are forced to work together by Hal Jordan. There’s also terrible menace growing beyond our planet. As is usually the case with me and the Green Lantern comics, I like the Earth stuff much better than the outer space or other universes stuff. Still, as with every Rebirth one-shot I’ve read, I find the characters and stories interesting enough that I want to see what happens next.

Superman Rebirth #1 [$2.99] by “storytellers” Peter J. Tomasi and Patrick Gleason with art by Doug Mahnke (pencils) and Jaime Mendoza (inks) is a very human story of the Superman who came to Earth from a parallel universe with his family. In it, he helps Lana Lang give the recently deceased “New 52″ Superman a proper burial alongside Jonathan and Martha Kent. 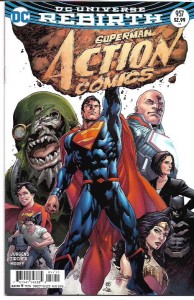 Meanwhile, we get another Superman in Action Comics #957 [$2.99] by writer Dan Jurgens with artist Patrick Zircher. It’s Lex Luthor in a super-suit. Which does not sit right with the Superman mentioned above.  Oh, yeah, and there’s a new Clark Kent who doesn’t seem to be Superman and a new Doomsday, sporting his original “burlap sack” look. So, yes, I want to see what happens next.

The Luthor of this comic book is more nuanced than many previous incarnations. I don’t trust him any more than the married Superman does, but decades of reading Superman comics have conditioned me to think of him as a stone villain. He may not be the Superman I want, but maybe he’s the Superman his city needs right now.

In apology to the artists who worked on the above comics, I know I give them the short shift when I discuss the issues they’ve drawn. First and foremost, I’m a story guy. That said, all of the art in the above issues was at least good and some of it, like Zircher’s Action Comics, was amazing. There’s a full-page shot of Superman in the issue that should be a poster.

I’m going to continue my examination of DC Universe Rebirth in my next column. See you then.