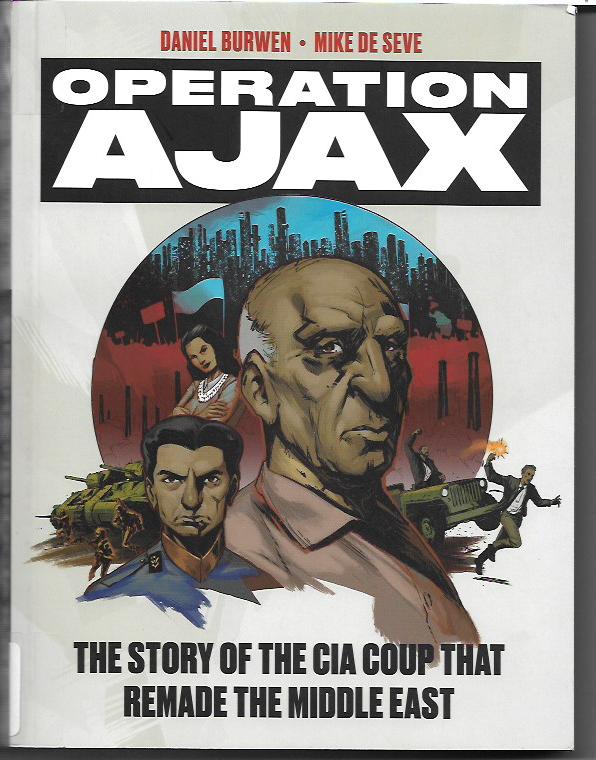 I have no one “pick of the week” for you this week. Instead, I have a three-way tie for that honor. It’s a good week.

Operation Ajax: The Story of the CIA Coup that Remade the Middle East [Verso; $25.95] was published last August. It’s a history in comics form with credits like those in a movie. A Cognito Comics & Verso Books production. Written by Mike de Seve. Edited by Stephen Kinzer. Created by Daniel Burwen. Adapted for comics b Mike de Seve and Jason McNamera. It’s a comics work that will not set well with many readers, introducing them as it were to history which has been routinely ignored by the media and political presentations of the factors and forces that created the turbulent region as we know it today. It is not an easy read.

The story opens in 1953. We get a “cast of characters” at the front of the book, but all are brought to unflinching life as the history unfolds. It starts with the oil, of course, and the fading British empire’s need for it or, more precisely, the power and influence it holds as a result of its control of that commodity. The rightfully revered Winston Churchill is a key player in what was certainly not his finest hour.

Greed for power and wealth. A mistreated and underpaid Iranian work force. Rulers and soldiers and politicians vying for dominance in a region becoming increasingly hostile for foreigners and nationals alike. A real chance for an Iranian democracy dashed nations like England and the United States promoting their interests above all others, often using tactics that most reasonable people would call criminal acts of war. By the time you reaching the final chapter of this history, you will be struck by what could have been the Iran of our time. If only…

As I said, Operation Ajax is a hard book to read. It will not sit well with those who try to reduce the Middle East conflict to such inane statements as “They hate our freedoms” or “Islamic terror.” Certainly they are those who hate our freedoms. Certainly there are those who use “religion” as a front for their own lust for power. But the creation and evolution of the ongoing crisis is not easily or accurately reduced to those talking points.

De Seve is an Emmy-nominated writer and director who has worked for major studios on major animation projects. The book has a cinematic feel to it that serves the telling of this history well. We get the story in chapters, each with its own brief introduction. This makes the complicated history easier to grasp. There’s a foreword at the front of the book and historical materials at the back of the book that add to the understanding of uncomfortable truths. However, it is the sure writing and expressive art that brings the reader into the times in which this history happened.

I admire the craft and the honesty and the intensity of Operation Ajax. I recommend to comics readers as an example of what our art form can accomplish, to those of us who struggle with the complex realities of our times and to libraries committed to serving their patrons well. 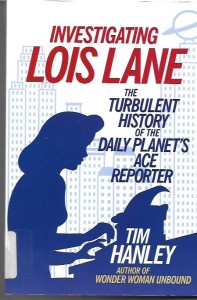 Tim Hanley’s Investigating Lois Lane: The Turbulent History of the Daily Planet’s Ace Reporter [Chicago Review Press; $18.95] is more than just the facts, m’am. While it is a meticulously-researched, almost obsessively-sourced biography of one of fiction’s best-known journalists, the book’s insights into the presentation of Lois by almost exclusively male editors, writers and artists offer insights valuable to anyone making comic books at a time when female readers are the fastest-growing part of our audience and as female creators are becoming more and more prominent in our field.

Hanley shows us all the many aspects of Lois Lane. In this history, we see her as the “sub sister” wanting to fight for scoops with the boys. We see the feisty reporter who will risk life and limb for story. We see the petulant diva who can’t see what hides behind the glasses of a fellow reporter. We see the subdued woman conforming to the times. We see the unruly child who must be taught lessons, often painfully, by the men in her life. We see the feminist icon fighting for social justice. We see the strong partner in both love and work. So many different versions of Lois Lane.

Hanley makes his most useful contributions to the conversation when he points how often – and to the detriment of the character – Lois is simply there to advance Superman’s story. It makes me consider how often that is done with both female and male supporting players and how I might address that in my future comics writing. Anything that forces me to rethink my art and craft is going to rate pretty high with me.

Investigating Lois Lane is a must-read for comics fans, historians and creators. I recommend it highly. 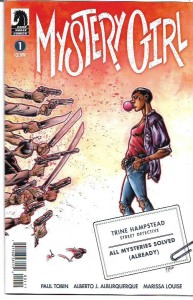 Paul Tobin, co-creator and writer of the glorious Bandette graphic albums, presents another strong female lead in Mystery Girl [Dark Horse; $3.99 per issue]. Trine Hampstead is a street detective and that should be taken literally as her office consists of a chair, a rug and a few plants in front of an apartment building in London. Her sign advertises:

Once a mystery is put before her or a question asked, Trine knows the solution to the mystery and the answer to the question. Though she doesn’t know how this ability came to her, Trine utilizes it to help people and to make a living. She doesn’t know what hasn’t been put before yet, but, everything else, yeah. She knows.

Trine is a likeable, relatable hero. Artist Alberto J. Alburquerque makes her real and is equally swell at creating a London that feels right to me. Colorist Marissa Louise uses her hues to work with the story and support it. This comic book, of which I have now read the first three issues, is the complete package.

The more-or-less street level mysteries give way to a case that has more global consequences. This feels like a natural progression and it’s further evidence of Tobin’s skill. He’s become a writer whose work I will always check out.

Mystery Girl Volume 1 [$12.99] will collect the first issues of the title. It’s scheduled to hit stores in July. Even though I bought the single issues, I’ll still be buying the trade. Mystery Girl is not just a keeper. It’s a keeper to be shared.