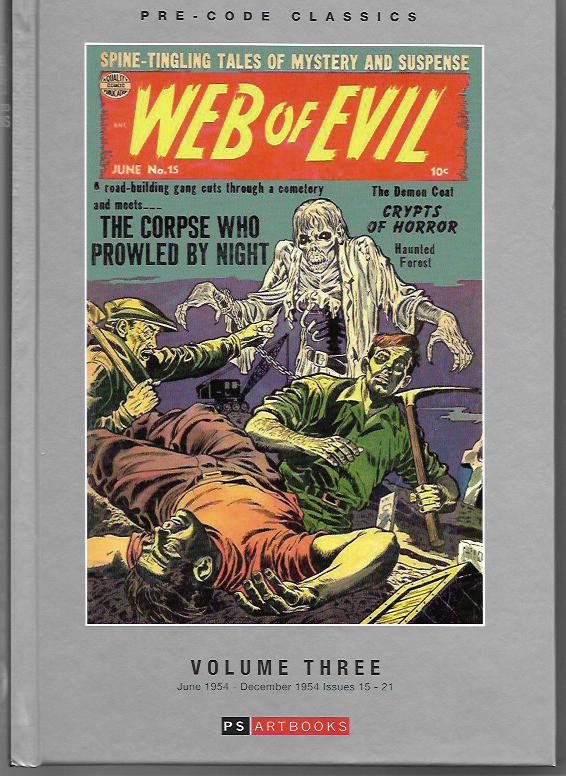 My interest in pre-code horror comics was sparked decades ago when science fiction and fantasy author Lawrence Watt-Evans wrote about them for the weekly Comics Buyer’s Guide. I was fascinated by the subject, but pre-code horror comics were hard to come by in those days. Some EC Comics horror stories had been reprinted in various formats and Marvel’s black-and-white and color horror comics from the 1970s were reprint some of that company’s scary tales from the 1950s, but that was pretty much it.

Today, with so many pre-code horror comics entering into the public domain, publishers like the UK’s PS Artbooks have been collecting entire runs of some pre-code titles in reasonably-priced hardcover editions. Shot from the original comics and sadly lacking any sort of historical context to the reprints, these books are still worth their fifty-bucks-or-so price tags. Just be warned that not every pre-code horror comic is as good as the issues published by EC, or worthy runner-ups like Marvel/Atlas and ACG.

PS’ Pre-Code Classics: Web of Evil Volume One through Three reprint the entire 21-issue run of the Quality Comics title from November 1952 to December 1954. I reviewed the first volume a couple months back, but now I have all three to consider.

Quality was, indeed, a quality publisher. Their biggest hits were Blackhawk and Plastic Man. They reprinted Will Eisner’s The Spirit and, simultaneously, published the adventures of a knockoff name of Midnight. Other notable Quality heroes included Uncle Sam, the Ray, Dollman, Phantom Lady and the Human Bomb. In the teen humor genre, Candy, which I collect when I can afford to, is one of the best of the Archie imitators. I also love The Barker, a quirky series about a traveling circus/carnival.

Horror was not a comfortable fit for Quality, but comics publishers were competing against the great many other publishers who entered the field after World War II and the lure of other entertainments. Sales were declining and no genre was off the table if there was a chance it could sell. Quality never went in for the excesses that some of their rivals embraced, but their horror comics didn’t stand out in any way.

Plastic Man creator Jack Cole contributed to the earliest issues, possibly writing his own stories. I have described his art on these tales as “boisterous” and “dizzying,” but his work was more so on Plastic Man and on rival publisher Lev Gleason’s Crime Does Not Pay and Daredevil. To date, comics detectives have not identified the other writers who contributed to Web of Evil.

The stories in Web of Evil feature a mix of vengeful spirits, men pretending to be vengeful spirits, supernatural creatures, science gone horribly wrong and the like. In addition to Cole, Web’s better artists include Charles Cuidera, Charles Nicholas, Harry Lazarus, Sheldon Moldoff and an effectively moody Louis Ravielli.

Web of Evil #20 [November, 1954] is my favorite issue of the title. Cover story “The Monster from the Deep” lifted some of its better moments from the classic 1953 movie The Beast from 20,000 Fathoms. “Katumba – The Man-Made Terror” invokes King Kong with its tale of two crooks and their fake monster. “Make-Up for Horror” is a real chiller about a make-up artist whose unusual techniques bring him both fame and ruin. We even get a mummy in “Death from the Tomb.” I was on the fence as to whether or not I was going to keep these three volumes – I’ve sold some pre-code horror collections I didn’t care for – but this issue earned them a place in my comics library. 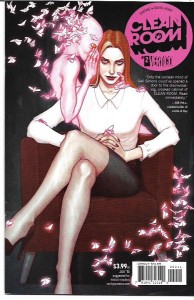 Gail Simone’s Clean Room [Vertigo; $3.99] per issue is possibly the most unsettling comics series I’ve read this year. It kicks off it Germany with an apparently possessed truck driver running over the young Astrid Mueller. Twice. Astrid grows up to start a cult-like organization that’s even scarier than Scientology. Astrid is one of two protagonists in this series. I use “protagonist” instead of “hero” because I’m not certain where either Mueller or reporter Chloe Pierce sit on the whole good/evil chart. That’s part of why I’m intrigued by and enjoying this series. Six issues in and I am not sure what’s going down and if I have a horse in this possibly humanity-ending race. Some writer that Simone.

Chloe is a sympathetic character, trying to get past her husband’s suicide – he was investigating Mueller – and her own recent attempt at suicide. Chloe is tough and vulnerable, but more the former than the latter. She may have powers that are just now developing, which makes me wonder if Mueller wants to work with her to save humanity or use her for Astrid’s own ends. Some writer that Simone.

Sidebar. Chloe has these neighbors. Very gentlemanly and perhaps a bit slow. I love them a lot. Some writer that Simone.

Artist and colorist Jon Davis-Hunt brings the right atmosphere to the book. His character designs are excellent and his storytelling is top-notch. The right artist for this series.

I’ve read the first six issues of Clean Room and I look forward to as many more as it takes to tell this story. Those issues will be collected in Clean Room Vol. 1: Immaculate Conception [$14.99] in June. That’s a book you’ll want to read. 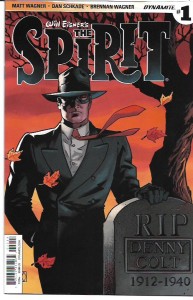 My pick of the week is Will Eisner’s The Spirit [Dynamite; $3.99 per issue] by writer Matt Wagner, artist Dan Schkade and colorist Brennan Wagner. Modern comic books don’t seem to have any interest in short stories, so you won’t see anything like Eisner’s classic tales here. Instead, you get a big sprawling story that takes place in Central City and several foreign ports.

When the series opens, the Spirit has been missing for years and is presumed to have been killed by one of his many enemies. Former sidekicks turned private detectives Sammy Strunk and Ebony White are trying to find out what happened to the Spirit while the Dolan family are trying to move on with their lives. There is all kinds of criminal and political intrigue going on in the city. The danger only increases when a definitely alive Spirit returns, raising even more questions. It’s a fun story, seasoned with appearances of old friends and foes.

Nine issues into the series, writer Wagner is maintaining a sweet Eisner ambiance to the stories while Schkade does the same with the visuals. I’m enjoying this series a great deal and so recommend it to all of you.