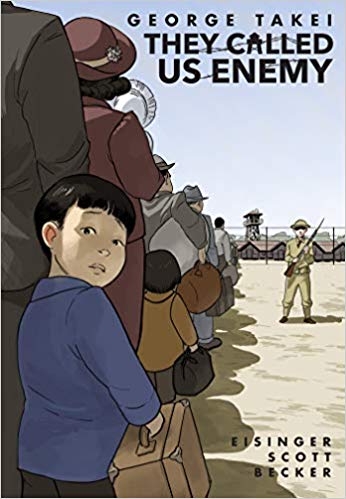 Conventions seem to take a lot more out of me than in years past. I was exhausted after doing G-Fest and the San Diego Comic-Con back to back. But I expected to be exhausted.

On Sunday, I was the guest of honor at the NEO ComicCon. It was a one-day show half an hour from my home in Medina, Ohio. It was held at an indoor soccer complex carpeted with artificial turf. It’s the one convention I attend where my feet don’t hurt during and after the convention. I was looking forward to the event.

NEO did not disappoint. I got to hang with a bunch of old friends, make some new ones, see some amazing cosplay and contribute to the Make-A-Wish Ohio, Kentucky & Indiana Organization. It should have been a relaxing convention and it was. I still came home exhausted.
Maybe I should start taking naps during conventions.

One of the high points of NEO for me was giving my Black Lightning Beat presentation. I told the audience what had been happening with me and Black Lightning this year – my visit to the set and several other things – and then answered questions. Here’s my takeaway from my presentation:

The fans love the TV show and my writing. They don’t like the new Batman and the Outsiders book. They love BL crossing over into the Arrowverse. They really want more BL merchandise, especially toys for children, especially Thunder and Lightning action figures and dolls. I got a good laugh when I said I would buy Thunder’s Dream House and a even bigger one when I described an inappropriate- -for-kids Freeland playset, complete with drug dealers and other vices. I don’t think that playset should be made, but if it was, I would buy it. For my Black Lightning archives, of course.

In this column, I’m reviewing my usual three items. There won’t be a pick of the week because I thought them all worthy of the honor. We begin with a graphic novel that is getting lots of press and is already a bestseller.

George Takei’s They Called Us Enemy [Top Shelf; $19.99] is a moving and often shocking graphic memoir revisiting the actor, author and activist’s childhood in a succession of U.S. concentration camps for Japanese-Americans. With exceptions so rare, they are virtually non-existent, these people had committed no crimes against the U.S. Over 60% of them were American citizens, a good number of them born in our country. And, if you want to quibble about my characterizing the camps as concentration camps, let’s glance at The Universal Declaration of Human Rights. Article 9 of the document says “No one shall be subjected to arbitrary arrest, detention or exile.”

Written by Takei, Justin Eisinger and Steven Scott with art by the wonderful Harmony Becker, They Called Us Enemy details a dark time in our ethical history. Stirred by politicians campaigning on fear and hate of the other – Sound familiar? – the American people went from standing by these victimized Japanese-Americans to supporting this manifestly immoral policy. Over 130,000 people, many of them children, suffered mightily as a result of the forced relocations.

Takei and his collaborators show how much internees lost when they were ripped from their homes and businesses. They depict the often squalid conditions in which those taken lived. But it also reveals the resiliency of the people and how they came together to create communities within their confinement. It also reveals the attempts to disrupt those communities and the continued hate-speech directed at them. It is not lost on me that such hate-speech still infects our country from the White House on down.

Lest I be accused of presenting a political screed, let me make my case that the most compelling part of this graphic memoir is how inspirational it is. Look at the love and unity of the people who were unfairly incarcerated. Look at the Takei family living their lives with grace and kindness and righteousness. Look at Takei himself, successful in his chosen field, happy in his personal life and always ready to stand by others in need. He’s an American hero.

I love They Called Us Enemy, difficult as reading it could be. I’m proud of a comics industry that can produce a work of art and heart as fine as this one. It’s a book I recommend to every comics fan, library and school. I’ll be buying additional copies for giving out as gifts.

If a comics creator were thinking “What off-beat manga would Tony Isabella totally fall in love with?”, they couldn’t do better than Kaiju Girl Caramelise by Spica Aoki [Yen Press; $13]. Shy teenager Kuroe Akaishi turns into a kaiju whenever romance enters her life. Sometimes it’s her hands, other times it’s her awkwardly emerging tail and, when things really get out of control, she turns into a full-blown giant creature named Harugon.

This is a delightful series. Kuroe is likeable and relatable. Arata Minami, class idol and the object of her romantic yearnings, is a very decent guy. However, my favorite character might the girl who Kuroe mistakes for Arata’s girlfriend but who is actually in love with…Harugon? This wondrously demented young lady dresses up in a Mothra larva and yearns for Harugon to smash her flat. It doesn’t get more wacky than that!

Kaiju Girl Caramelise is rated for teens, but I think it’s suitable for all ages. It’s big fun and I recommend it to all. 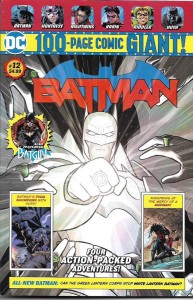 Even though DC Comics’ formerly Walmart-exclusive titles will soon be  available from comic shops, albeit on a two-week delay, I still plan to buy them from my neighborhood Walmart. This is nostalgia, pure and simple. I haven’t “haunted” a convenience store or a drug store for the new comics since before there were comic-book shops. I get a little anticipatory thrill wondering if the new DC giants will be on sale and a sense of victory when they have. As demented behavior goes, it could be worse.

Batman Giant is my favorite of the titles. Brian Michael Bendis and artist Nick Derington do the original lead story which has Batman traveling through time and space. It reminds me of the Jack Schiff-era Batman with its emphasis on sci-fi stuff, yet with modern-era writing and art.

The reprint features are Batman, Nightwing and Batgirl. All of them are from excellent runs of the characters, especially Gail Simone’s Batgirl. Add it up and you get roughly three-and-a-half comics for just five bucks. The title is one of the most entertaining bargains in comics. Welcome to Walmart!

Don’t mind me. I’m practicing for my inevitable job as a Walmart greeter. The new comics are by the first self-checkout aisle, just past the initial cluster of self-checkout machines.