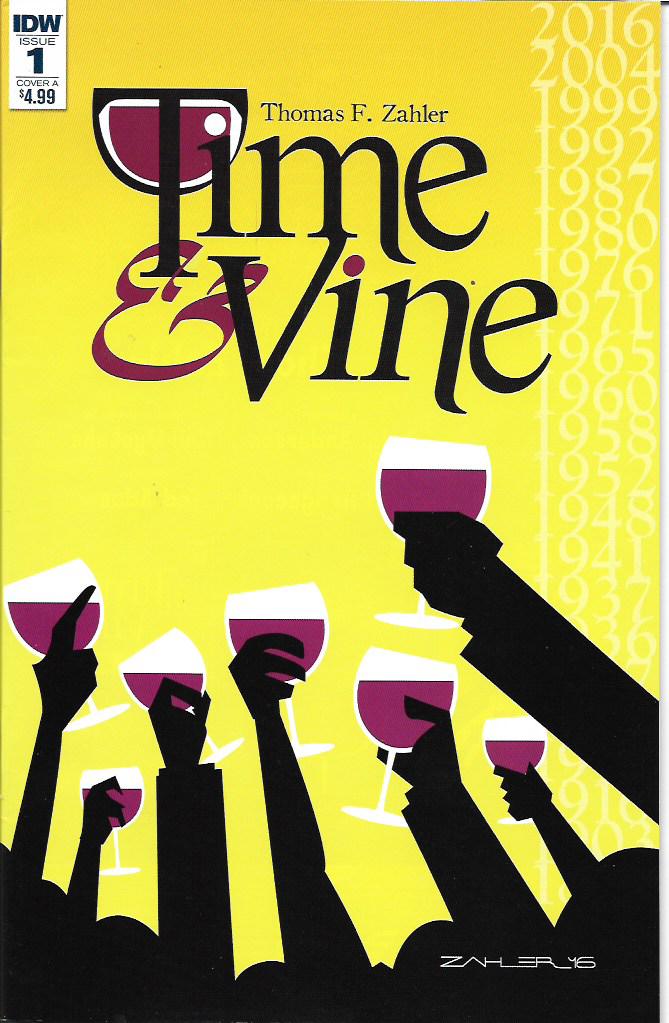 February is a crazy busy month for me. Two conventions, finishing up Black Lightning: Cold Dead Hands, pitching ideas for future projects, flying to New York to be interviewed on camera for a cool Marvel Comics project focusing on that publisher’s legacy and the creators who are part of it. It’s why this week’s “Tony’s Tips” is posting so late. Mea culpa.

Like most weeks in this the true Golden Age of Comics, I have some comics to share with you. Let’s get right to the reviews, starting with my pick of the week…

Thomas F. Zahler’s Time & Vine [IDW; $24.99], which collects issues #1-4 of the title, will be published later this month. Drawn in the same animated and inviting style of Zahler’s classic Love and Capes super-hero situation comedy and his critically-acclaimed romance Long Distance, this graphic novel has one of the most intriguing premises in recent memories.

There’s a winery in Jefferson, New York. It’s a place of history, of memories and of magic. If you’re given access to its marvelously vast wine cellar, you can have a glass of wine from any vintage of the winery’s long history…and travel back in time to any day of the year that vintage was bottled.

Jack, the owner of the winery, is a greying “Time Lord” of sorts, looking for the perfect companion to join him on his time travels. Megan, a young woman visiting the winery with her schoolteacher friends, is dealing with her mother’s Alzheimer’s Disease and her conflicted emotions for putting her mom in a nursing home. In her, Jack sees an adventurous spirit and a love of history. And so their journeys begin…

As with Zahler’s other series, the emphasis is on the characters. Jack has a past that drives him on their trips. Megan’s mother has a secret the schoolteacher must uncover. The supporting characters, both in the present and the past, are engaging. The attention to historical detail add to all their stories. The reader will come to embrace Jack and Megan as they would dear friends. It’s something I’ve seen in Zahler’s other works and, quite frankly, I’d like to see reflected in more movies and TV shows. I’m amazed the Hollywood powers that be haven’t pursued his creations.

The 176-page graphic novel tells great stories with the main story. It has laughs, suspenseful moments and a truly satisfying ending. Though full disclosure demands I mention Zahler is one of my best friends, I would have made this book my pick of the week even if I hated him. Which I maybe do a little, if only because Time & Vine makes me envious of his talents as both writer and artist.

I wish Time & Vine would be out in time for Valentine’s Day. But, at any time of the year, it would make a great gift for that comics reader or even that non-comics reader you love. 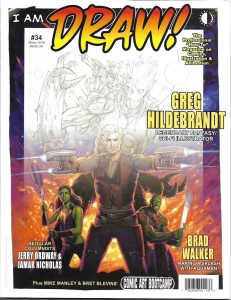 TwoMorrows is known for its comics history and interviews magazines like Alter Ego, Back Issue and The Jack Kirby Collector, but also published Draw!, a fine “how to” journal on comics, illustration and animation and more. Though the magazine, edited by artist Mike Manley, is obviously aimed at artists, there’s a lot here for the writers and just plain fans among us.

Issue #34 [$8.95] leads off with a long discussion/interview with Greg Hildebrandt, one of my favorite fantasy, science fiction and even super-hero illustrators. It follows that with Jerry Ordway’s regular column, an interview with Aquaman artist Brad Walker, a “Comic Art Bootcamp” by a dozen different pros and Jamar Nicholas’ regular column on the tools of the art trade. Clearly, as a writer, my work process is very different from that of my artist partners. But knowing how they work and what tools they use, especially what with some of those tools simply not existing when I first started writing comic books 45 years ago, informs what I can expect when they are drawing one of my scripts.

Every issue, I learn from Draw! Learning of all kinds will always be of benefit to writers. Learning helps you grow as a writer. So, artist or not, I recommend Draw! It’s an important magazine that doesn’t get the recognition it deserves. 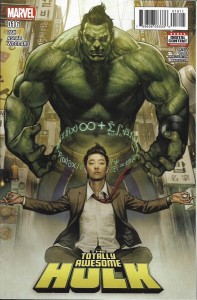 This is what it looks like when Hulks cry. Which is another way of saying this is how terrific comics become not-so-terrific. I speak of The Totally Awesome Hulk.

I love Amadeus Cho. Created by Greg Pak and Takeshi Miyazawa, I’ve enjoyed the adventures of this teen genius from the start. One of the smartest people in the Marvel Universe, he’s gone from a great supporting character to curing Bruce Banner and becoming a new and different kind of Hulk. He’s impulsive and prideful, but no other Hulk has quite been like him. He’s been the head of a company and is a member of the new Champions, teaming with other young heroes who, honestly, had enough of hanging out with adult super-heroes more concerned with exercising control and fighting with their old enemies than actually helping people.

Totally Awesome Hulk #15-18 [$3.95] were a good example of why I’m an Amadeus Cho fan. In it, he teamed with other Asian heroes (Ms. Marvel, Shang-Chi and Silk) for an extended adventure in which they helped people, raised money for a charitable effort and inspired Asian-American kids. We also saw Cho’s impulsiveness and pride get in the way sometimes. To me, these were far more interesting traits for a Hulk than the default “anger” issue. Except…

Following a boring “Weapons of Mutant Destruction” crossover with Weapon X, the “anger and rage” stuff was clumsily introduced into Cho’s life. Been there, seen that. To further disinterest me, Cho then shot himself into space to get a grip on these issues, ending up on Planet Hulk. Been there, seen that. Since the title morphed into Incredible Hulk with the renumbered #709, I’m guessing this is a set-up to revive Bruce Banner and make him the Hulk again. This is what it sounds like when Hulks cry.

By all means, seek out Cho’s earlier adventures. They were lots of fun. I’ll continue to read Incredible Hulk in the hope I am wrong about where it’s heading. However, I can’t recommend this current direction.