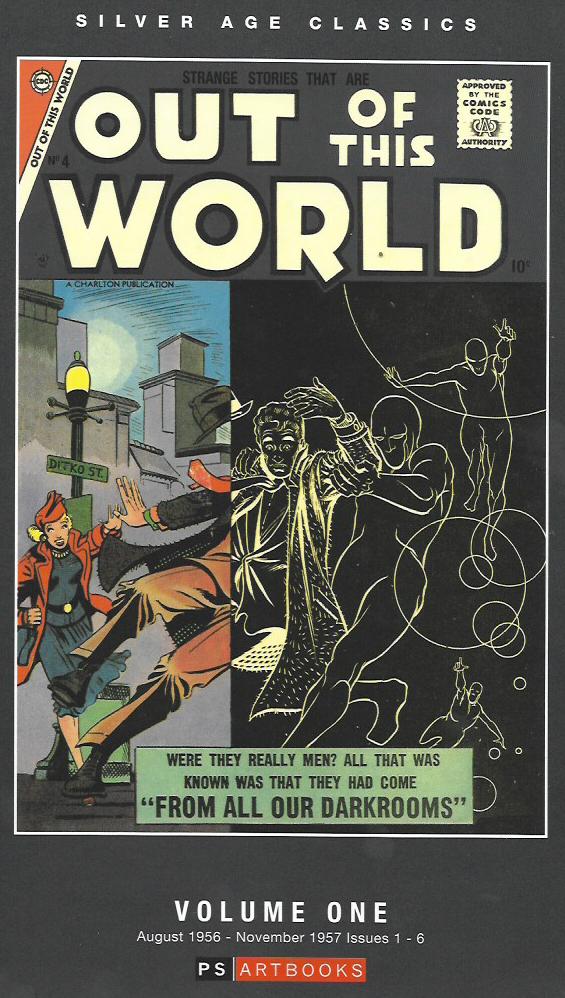 My 2018 convention season starts next month with Action! on Sunday, February 18, at St. Clair College in Windsor, Canada. This all-ages event features comic books, anime, manga, horror and video games. This will be my first convention appearance outside of the United States. As with most of my 2018 convention and other appearances, I’ll be signing Isabella-written stuff for free.

In February, I’ll also be a guest at Pensacon: Pensacola Comic Con on Friday through Sunday, February 23-25, at the Pensacola Bay Center. This lovely Florida city goes all out for the convention. Several bars and restaurants adopt special fan-based themes for the weekend. This is my third visit to what has become one of my very favorite conventions and, as with Action!, I’ll be signing Isabella stuff for free.

Turning to this week’s reviews…

I’m tempted to declare PS Artbooks as a dependent on my taxes. The British publisher releases two hardcover comics collections every month and I buy both of them. One of the most recent is Silver Age Classics: Out of This World Volume One [$49.99], which reprints the first six issues of the 1950s Charlton title.

Steve Ditko is the star of this title, though he doesn’t make his first appearance until the third issue. From issues #3-6, he drew 13 interior issues and all the covers. As you might expect, Ditko’s early work already shows his creativity and storytelling, as well as his range. There are pure science-fiction stories, a sea beast who could fit in with Godzilla and his Monster Island chums, some alien invaders and some alien visitors who are of a much friendlier sort. There are some terrific shock endings and genuinely warm-and-fuzzy endings.

My favorite of the Ditko stories in this volume are the Jack Oleck-written “The Supermen” in issue #3, an unusual tale of evolution, and issue #5’s heart-warming “The Man Who Stepped Out of a Cloud.” The prolific Joe Gill likely wrote that one.

The usual Charlton artists are represented in this volume: Charles Nicholas, Vince Alascia, Rocco Mastroserio, Dick Giordano, Bill Molno and Sal Trapani. Charlton’s page rates were almost certainly the lowest in the industry, but they were one of the few survivors of the comics crash of the 1950s. Artists made up for the low rates by volume and Charlton always had plenty of work for them.

Dick Wood wrote at least one story for Out of This World and might have written others. The prolific Ken Fitch also wrote stories for the title, but those have not yet been identified. As these reprint volumes continues, we’ll see some other artists and writers turning up for an assignment or two. The 1950s were tough times for comics professionals.

Most of the Ditko stories have been reprinted elsewhere and, in a few cases, multiple elsewheres. But I like seeing those stories in their original context, sharing issues with tales drawn by others. It gives me a better sense of the era.

Silver Age Classics: Out of This World Volume One is my pick of the week for the Ditko stories and for presenting its slice of comics history. I’m looking forward to subsequent volumes. 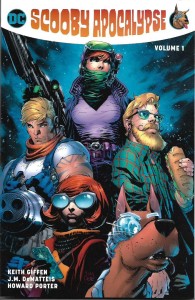 DC Comics has done some pretty strange takes on classic cartoons in recent years. I have more of an attachment to the Bugs Bunny bunch than I do to the House of Hanna-Barbara, but I have fond memories of some of the latter. In any case, for the most part, I’ve found these odd takes entertaining and, in the case of The Flintstones, flat-out brilliant. This is why I kept trying to give one of DC’s Hanna-Barbera revisions every opportunity to make me laugh or make me think or even make me think it wasn’t one of the dumbest, most vile comics of recent times.

Scooby Apocalypse Volume 1 [$16.99] isn’t as bad-to-the-soul vile as Afterlife with Archie, but that’s setting the bar so low as to be meaningless. Nothing is as bad as Afterlife with Archie and the other Roberto Aguirre-Sacasa-crafted abominations inflicted on the classic characters from Riverdale. I know both this series and the Archie ones have their devotees. I don’t fault readers who enjoy them. I write reviews. I don’t chisel commandments onto to slabs of stone. If you enjoy them, I’m happy for you.

Conceived by Jim Lee, written by Keith Giffen and J.M. DeMatteis and drawn mainly by Howard Porter, Scooby Apocalypse imagines the Mystery Machine crew in a post-apocalyptic world quickly becoming overrun by humans and other creatures turned into monsters by a mad scientists plot gone horribly awry. Our beloved Velma was one of those scientists, albeit not privy to the full details of the plot.  And when she gets together with Daphne and Fred – a disgraced news reporter and her hopelessly smitten cameraman – Velma continues to keep secrets from her new allies. In an era of long-overdue female empowerment, Daphne and Velma falls somewhat short of Wonder Woman, Ms. Marvel, Faith and other heroines.

Scooby is a “Smart Dog” prototype, considered to be stupid by his fellow enhanced canine. Shaggy is a dog handler working with these dogs. They are the two most positive characters in this reimagining of the classic cartoon.

I know why Scooby Apocalypse doesn’t work for me. I am fond of the original characters and, from limited animation cartoons to live-action movies, have found them a likeable group. I think there is still a place for the originals in today’s entertainments and their continued success bears me out.

I’m not a fan of zombies. If you cut the number of zombie books, comics and movies in half, there would still be too many zombies. Eat a salad once a while, you lumbering cliches.

But I have a fondness for many other cartoon characters who appear in DC’s reimaginings – Ruff and Reddy leap to mind – and can enjoy their new comics. For my taste, Scooby Apocalypse isn’t compelling. The plot drags and the writing doesn’t sparkle. I just don’t think it’s a good comic book. 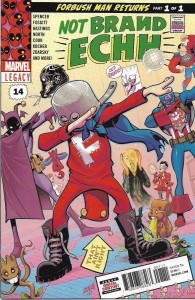 Marvel’s Legacy movement with its renumbering of various titles and the attendant math involved makes my head spin…and I got “A’s” in honors math in high school. But one of the more delightful aspects of this was the publication of Not Brand Echh #14 [$3.99].

Not Brand Echh was one of my favorite comics titles as a teenager. Marvel making fun of itself and its competitors made me laugh out loud before that was an online thing. I wasn’t expecting to have a similar reaction to this surprise new issue as I did to those from the 1960s, but hope springs eternal.

What I got was an amusing anthology that mostly made me smile and that ain’t a bad thing in these sad times. Writer Nick Spencer made sport of his own Secret Empire travesty and earns points for that. Forbush Man was back trying to pitch a new series. Katie Cook got the biggest smile out of me, but, really, everyone involved in this issue acquitted themselves with honor and humor. My only complaint is that I wasn’t part of this Marvel madness.

Will there be more Not Brand Echh? I sure hope so. Because I have this big-budget Forbush Man movie script and…

I’ll be back next week with more reviews.
© 2018 Tony Isabella