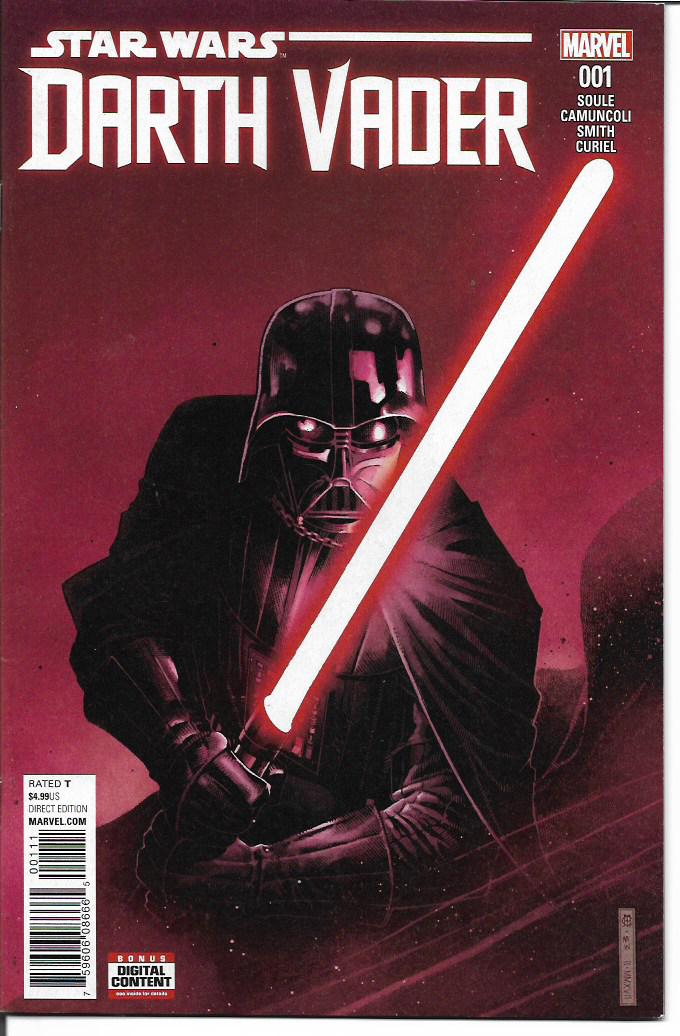 Christmas has come and gone. Just a few days before Christmas, your Tipster turned 66 and, to the amazement of all, did not crumble to dust. I had a lovely birthday evening with Sainted Wife Barb, son Ed, daughter Kelly and cat Simba. We had pizza and pasta from what has become my favorite local pizza place, hooked up our new family gift – a Ultra HD Blu-ray player – and watched Wonder Woman, which is my favorite of the DC Comics movies. Not to mention hundreds of online greetings from my friends and readers. It was a good day to not crumble to dust.

While gearing up to finish writing Black Lightning: Cold Dead Hands and plan my next works, I have been reading chunks of comic books. I’ll never again be a “read the new comics as they come out” kind of reader. It doesn’t fit my lifestyle. But I really enjoy reading several issues of a title at a time.

Darth Vader #1-9 [Marvel; $4.99 for #1, $3.99 each for the rest] is set after the Clone Wars. The Jedi have been defeated and most of them are dead. Palpatine is emperor. Anakin Skywalker has gone to the Dark Side of the Force, defeated and left to die by Obi-Wan Kenobi, and had his life preserved by Palpatine inside cybernetic armor. Thanks to a handy “what has gone before” prologue to these issues, you’d never know I haven’t seen Star Wars II, III and VIII. Kudos to Marvel for including these introductions in all their Star Wars comics.

I enjoyed these nine issues, despite their protagonist serving the most evil man in the galaxy and destined to become a mass murderer of planetary proportions. The Emperor is molding Vader with “tough love” and demanding his protégé prove himself at every turn. Vader faces overwhelming odds in his training and missions. This reader can’t root for him, but can’t deny his determination and skill in these matters.

Writer Charles Soule presents Vader with both worthy challenges and adversaries. Vader has had to forge his own light saber by taking and corrupting one from a Jedi he defeats in battle. In the latest issues, Darth is hunting down Jedi archivist Jocasta Nu, who is a fascinating character in her own right. The odds don’t seem to be in Nu’s favor, but I’m hoping she survives this story.

Penciler Giuseppe Camuncoli hails from Italy and has drawn comics for DC (Hellblazer) and Marvel (Spider-Man). In these comics, he’s captured the Star Wars universe and shown his proficiency with the action, the human drama and the storytelling. Inkers Cam Smith (#1-6) and Danielle Orlandini (#7-9) have complemented Camuncoli well. Colorist David Curiel has added great atmosphere to these comics. Kudos to editors Jordan D. White and Heather Antos for their roles in putting together a terrific creative team and facilitating that team’s ability to tell amazing stories.

The first six issues of this title have been collected in Star Wars: Darth Vader: Dark Lord of the Sith Vol. 1: Imperial Machine [$17.99]. I recommend this series to hard-core and casual Star Wars fans alike. These are some excellent comics and so earn their place as my pick of the week. 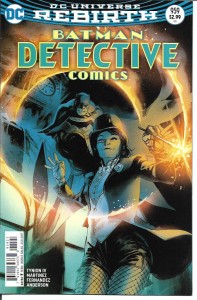 I also read Detective Comics #958-966 [DC; $2.99]. Since “Rebirth,” I’ve been enjoying Batman more than I have in years. He is far more sane that he’s been in years, still driven but no longer so driven as to be a menace to himself and others. He has enlisted people in his war on crime who he doesn’t treat like pieces on a chessboard. He seems honestly concerned about them and not merely in terms of his  battle plans. There are still some rough edges for me. To name one example, more Bruce Wayne screen time is needed.

Zatanna, especially in her traditional magician’s costume, has been a favorite of mine since I “met” her in 1964. She appears in #958-962. I like how writer James Tynion IV writes her. Artists Alvaro Martinez (pencils), Raul Fernandez (inks) and Brad Anderson (color) did an excellent job on the visuals.

That was followed by a two-issue story that had great moments for Clayface (maybe my favorite of Batman’s teammates) and the Spoiler. The story was by Tynion and Christopher Sebela with script by the latter, art by Carmen Carnero and color by Ulises Arreola and Kelly Fitzpatrick.

Issue #965-966 kicked off “A Lonely Place of Living” by Tynion IV, by artists Eddy Barrows and Eber Ferreira with color by Adriano Lucus. This loses me a bit for a number of reasons. I’m not fond of alternate universe and time travel stories. I’m also not yet sold on the “Mr. Oz” event running through several DC titles. Maybe it will grow on me, but I’m not there yet. 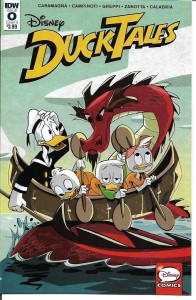 I love the new DuckTales cartoon series airing on Disney XD. But, as much as I hate giving a negative review during Christmas week, IDW’s DuckTales comic books [$3.99 each] are not anywhere near as much fun or as well-crafted as the cartoons.

They purport to be the daring adventures of Scrooge McDuck, Donald Duck and Della Duck. Almost every story in issue #0-4 had the same basic structure. They open at the conclusion of an adventure with Donald in some embarrassing situation. After removing any suspense with these openings, the stories go back to relate what happened, ending with a shot of poor suffering Donald.

I have been buying all of IDW’s Disney titles, but DuckTales has been taken off my list. It doesn’t entertain or interest me. Since your mileage might vary, I suggest you first seek to borrow these comics from your local library.

DuckTales: Treasure Trove [$9.99] reprints issues #0-2 and will be published in January.

DuckTales: Mysteries and Mallards [$9.99] with issues #3-5 will be published in May.