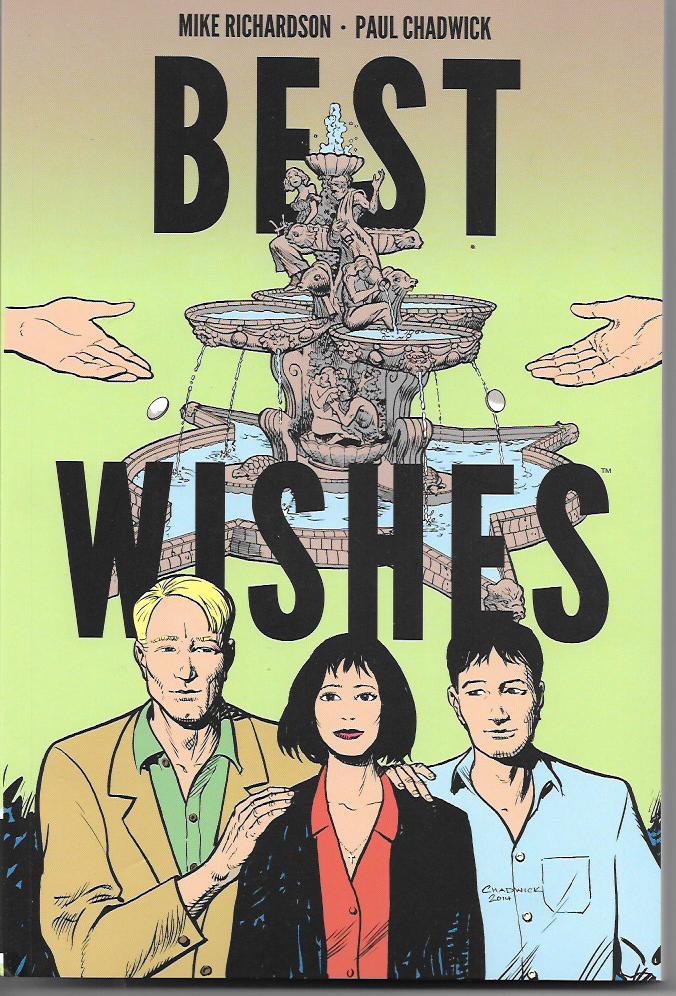 Christmas is eight days away as I write this week’s column, which means you’ve either finished your holiday shopping for the season or that you aren’t reading this because you’re running around like a maniac trying to finish your shopping.

If it’s the former, good for you. You deserve to kick back with a good comic book or graphic novel. Or maybe binge-watch one of the broadcast or streaming comic-book series your holiday preparation has kept you too busy to watch. Me, I need to finish the Punisher, start the Runaways and catch up on Agents of S.H.I.E.L.D., iZombie and the Gifted. Of the shows I’m current with, I’d most recommend Lucifer, even though a devilishly good time might seem at odds with this particular holiday season.

As for more substantial comics reading, there are so many terrific collections I wouldn’t know where to begin with my recommendations. Actually, I do know where to begin. That would be the several thick collections of Stan Sakai’s Usagi Yojimbo. As I’ve said, I believe Sakai is our greatest living cartoonist.

Beyond that amazing saga, there are many other wonderful comic-book omnibuses and comic-strip collections. I’m looking at the Swamp Thing Bronze Age Omnibus across from my desk and a stack of books that includes the Pogo volumes lovingly gathered by Caroline Kelly, the daughter of Pogo creator Walt Kelly and a remarkable person who left us too soon. Enjoy the holidays, my friends, but also remember those who aren’t with us this year.

Best Wishes by Mike Richardson (story) and Paul Chadwick (script, art, lettering) is my pick of the week and one of the best graphic novels I’ve read all year. The black-and-white graphic novel [Dark Horse; $19.99] is a modern-day romance set in New York City and one that played out like a great movie in my head.

An ornate fountain from the old world, transplanted to Central Park to receive the coins and attendant wishes of those who bask in its beauty and feel its magic. Two strangers, a man and a woman, both graphic artists. One seeks fame and respect. The other seeks love. Fate draws them together as the city launches a competition for a new symbol. Lead characters Cal and Mary are expertly made; we get to know them and root from them, even when they’re at odds with one another. The supporting characters aren’t all as vivid, but Mary’s pro football player boyfriend is going to offer a great opportunity for whatever actor plays him in the movie that ought to happen.

I love Best Wishes so much I’ve already bought extra copies to give to friends. I’ll be amazed if it’s not a contender for next year’s best graphic novel in the Eisners and every other awards. It earns my highest recommendation. 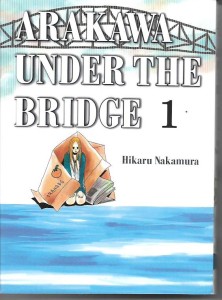 When it comes to weird humor, I can always count on manga offering me something I never expected. Hikaru Nakamura’s Arakawa Under the Bridge 1 [Vertical Comics; $17.95] is fascinating, funny and very, very odd. It’s the story of Kou Ichinomiya, a young man who is the future owner of a vast corporation and who has already, while still in school, become a success on his own. Raised by a single parent, his father, Kou has had the rule “never own anyone” branded on his soul. His life takes a strange turn when he accidentally falls into the Arakawa River and almost drowns.

Kou’s rescued by Nino, a homeless woman who claims to be from Venus and who lives living under the Arakawa bridge. He must repay her, but, when he asks how, she asks him to teach her about love. They become boyfriend and girlfriend as Kou moves into his own makeshift home under the bridge. From there, things get even more strange for the wealthy young man.

There is an entire community of increasingly odd “citizens” living under the bridge. They range from a man who pretends to be a kappa (demon) and who is the chief of the village to Sister, a powerful ex-soldier who dresses as a nun, to Stella, a little blonde orphan from England who considers herself to be the gangster boss of the Arakawa Bridge people. Kou tries to navigate his crazy new life as the relationship between him and Nino grows. It’s a heartwarming, hilarious love story.

This Vertical volume combines volumes one and two of the manga into a single 366-page book. Arakawa Under the Bridge has been an anime series, a TV drama and a live-action film. The original manga runs to fifteen volumes.

This quirky romantic comedy won’t be to every reader’s taste, but I loved it. Next time you’re looking for something different from comics, give it a try. 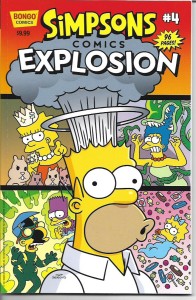 Simpsons Comics Explosion #4 [Bongo Comics; $9.99] is 96 pages of full-color fun. The yearly reprint special is filled with classic comics stories. Writer Ian Boothby, who always delivers hilarious scripts, is represented by “Stand by Me” (in which Homer gets a job standing next to people to make them look good); “Power Plants Vs. Zombies (a spoof of the popular video game); “Now You Wiggum, Now You Don’t (Chief Wiggum gives Homer a pass in exchange for Homer’s watching Ralph); and “Dial ‘M’ for Milhouse!” That last one is one of my all-time favorite Simpsons comics stories featuring Milhouse gained transformative powers. One of his super-hero identities is Electroshock, who resembles my own Black Lightning.

Bongo’s Simpsons comic books are always worth picking up, but this annual is exceptional. Just the thing to occupy those long days at the nuclear power plant. What’s the worst that could happen?