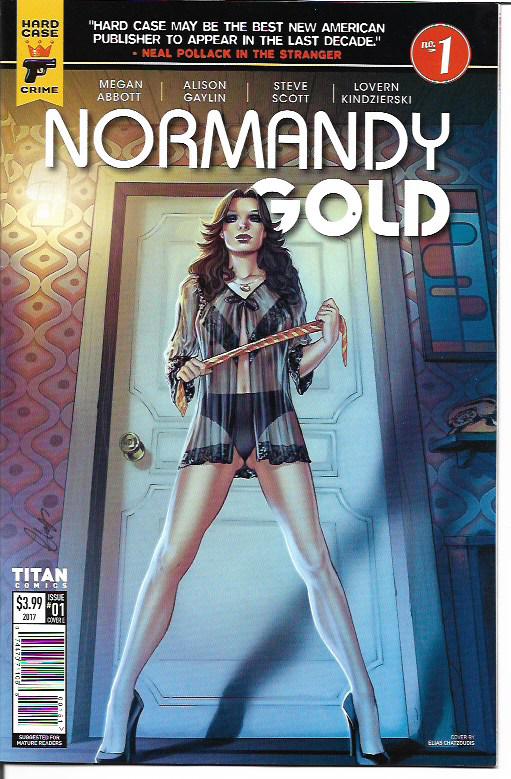 Normandy Gold [Titan Comics; $3.99] is a hard-as-nails crime comic book with a heroine who is even harder. Written by Megan Abbott, an Edgar-winning author of seven crime novels and writer/journalist Alison Gaylin, this comics series is drawn by the remarkable Steve Scott. By way of full disclosure, Scott is a good friend of mine. But I’m also an admirer of his work and it was his name that led me to Normandy Gold.

Sheriff Normandy Gold comes from a broken family, but was raised by a lawman. She followed him into the profession. This series opens with her receiving a phone call from her half-sister Lila, living in our nation’s capital. The initially happy conversation takes a dark turn when Lila is murdered as Normandy listens. The sheriff is in Washington D.C. a few pages later.

Set in the 1970s, this is a thriller of politics and prostitution. The D.C. police don’t have much interest in investigating the death of a call girl – there are so many of them in the city – but Gold will go to extreme lengths to find her sister’s killer and deal out some justice to him. The situation turns out to be a heck of a lot more complicated than Normandy imagined and with tendrils reaching upward to the highest levels of power.

I have the first four issues of Normandy Gold. The characterization of the sheriff is powerful and scary. There are scenes that shake her and the reader. Adding to these moments and the overall story is Scott’s sure storytelling and excellent depictions of the era in which the story is set. I’m hooked.

Normandy Gold is my pick of the week. A trade paperback collecting the series [$19.99] will be published in March. Even though I have (or will have) all of the individual issues, I plan to buy a copy of that book. 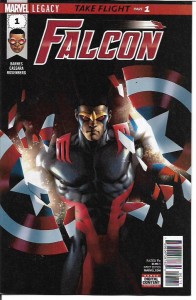 Though diminished by the Captain Hydra Steve Rogers nonsense – and nothing in that ridiculous event has changed my microscopically low opinion of it – the Captain America Sam Wilson title told a number of interesting stories that touched on the political issues of the real world. While all of those stories could have been told without the Captain Hydra stuff, I applaud them nonetheless. Knowing that Sam Wilson would almost certainly resume his role as the Falcon, I was eager to see what Marvel would do with him.

Falcon #1 [$3.99] has Sam trying to figure out what kind of a hero he wants to be. Screenwriter and producer Rodney Barnes has credits ranging from The Boondocks to Marvel’s Runaways. He’s also earned a number of top honors for his work. In this initial issue, Falcon is trying to broker peace between warring Chicago street gangs. It’s good premise, torn from reality, as it were, but it’s weakened by a couple clunky speeches and the last page introduction of a surprise fantasy element. Additionally, I’m not completely on board with the Joshua Cassara art. It’s kinda stiff in some scenes and way too shadowy in others.

I’m not giving up on Falcon. I like Sam Wilson too much for that. I also want to see where Barnes goes from here. My hope is that he doesn’t pin the folly of man on the supernatural. 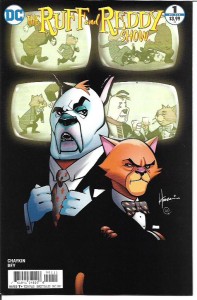 The Ruff & Reddy Show #1 [DC; $3.99] was a definite contender for this week’s pick of the week. Writer Howard Chaykin weaves a cool almost biographical tale about a world where humans coexist with and, naturally, discriminate against the very cartoon characters who entertain them. Ranging across a couple decades, we meet the team of Ruff and Reddy, a clever cat and somewhat less clever dog, who, despite the success they achieved together, hate each other. The enmity is the push that leads to the downfall of their careers.

Chaykin has a knack for writing the 1950s and 1960s. He knows his history and, in this first issue, there are echoes of those real-life entertainers who fell from grace. Artist Mac Rey illustrates the issue in a style that reminds me of the more “hip” cartoons of the 1960s. It’s a classy look for an intriguing story.

I was skeptical of DC placing beloved animated characters in this more realistic and serious world. Especially when it came to Ruff and Reddy, two of my own childhood favorites. However, with a rare exception, I’m getting a kick out of these titles. They may not be the characters as I remember them, but, as long as they challenge and entertain me, I’m on board with them.

One more note for this week. Black Lightning: Cold Dead Hands #1 is now on sale and has debuted to almost universally terrific reviews. Artist Clayton Henry is doing an amazing job on the series, as is colorist Pete Pantazis. Editor Jim Chadwick gives me better notes than almost any editor I’ve ever worked with in my 45 years in the comics biz. Everyone at DC, including management and publicity, is giving this series tremendous support. I’m as proud of this series as anything I’ve written. Which is my long-winded way of saying I hope you’ll give the series a look.