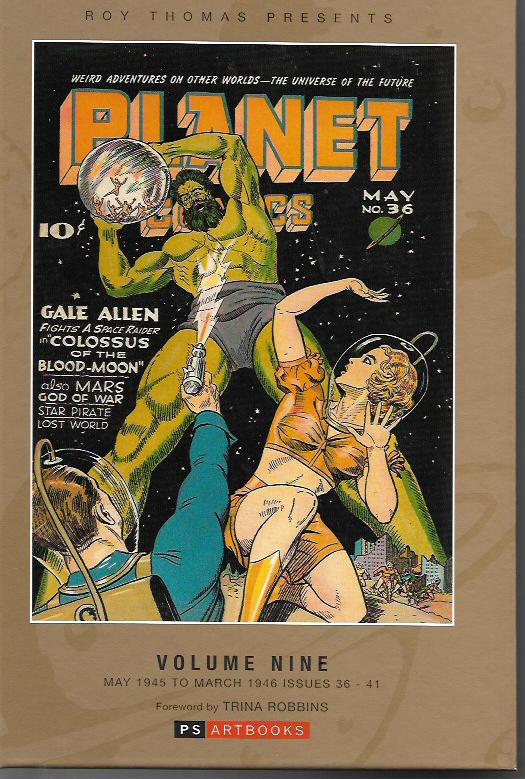 Take a deep breath before you try to speak the name of our premiere offering for this week: Roy Thomas Presents Planet Comics Collected Works Volume Nine [PS Artbooks; $59.99]. This volume was published in 2015 and is readily available, often at considerable discounts. I recommend our own InStock Trades. They sponsor this column, but they also get a good chunk of my own money on account of they offer great prices and service.

Published by Fiction House from 1940 to 1953, Planet Comics was the leading comic-book science fiction anthology during its long life. During the peak of that run, Planet could be counted on for covers with very attractive women at great risk of alien peril and colds. Inside each issue, there would be regular features, some of those also featuring those clothing-challenged women, though these women were often strong heroines in their own rights.

Volume Nine reprints Planet Comics #36-41 [May 1945 to March 1946] with a wonderful foreword by groundbreaking comics creator, comics historian and Eisner Hall of Fame member Trina Robbins. I reviewed  Last Girl Standing, her autobiography, a couple weeks back. Robbins writes of her first exposure to Planet Comics and her appreciation of the powerful women found therein. It’s wrong to dismiss Fiction House’s titles as mere cheesecake and male fantasies. They held a strong appeal for women as well.

I’m a big fan of “The Lost World” strip. Hunt Bowman and his lady friend Lyssa wander an Earth conquered by the vile Voltamen, who have hunted humans into nigh-extinction. In a world of dangerous mutated creatures and moss-covered ruins, Hunt and Lyssa battle for survival and to kill Voltamen.

Drawn by the legendary Lily Renee, the chapters in these issues are like unto forerunners to Don McGregor’s great Killraven stories of the 1970s. Especially when the couple acquires three new supporting characters, siblings who were put into suspended animation by their scientist father when the Voltamen first attacked. Brother Bruce’s physical body is destroyed, but his brain is transplanted into an alien body. The siblings come and go, but they were a fine addition to the series.

“Mysta of the Moon” and “Gale Allen and the Girl Squadron” featured a confident super-powered woman and an equally confident government agent. They protect helpless men and women while dishing out dire fates to villains. All while dressed in the height of futuristic, albeit skimpy, fashion.

“Star Pirate” and “Star Rangers” are less interesting, though the former is enlivened by the hero’s shady first mate and the art of a young Murphy Anderson.

“Auro, Lord of Jupiter” rejoins the title in issue #41. However, in this revamp, the mind and soul of a Earth scientist is transplanted into the body of the late king. I’m looking forward to reading the next volume to see where this goes.

Frank Belknap Long and the prolific Walter Gibson are known to have written for Planet Comics, but these stories are credited to house names like Thorncliffe Herrick and Ross Gallun. Some stories have clever ideas. Some have sexism and xenophobia. All are straight and to the point adventures. Most are fun to read.

I get a kick out of reading these blasts from the past, even those that make a modern-day reader wince. Largely free of the continuity of modern comics, any Planet Comics volume can be enjoyed without regard to past stories. That makes them an ideal gift for readers just looking for some comics history and fun. 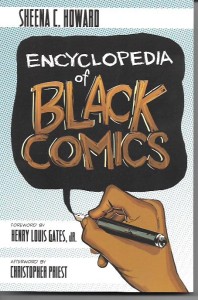 I’m recommending Sheena C. Howard’s Encyclopedia of Black Comics [Fulcrum; $23.95] with an asterix. The history of black creators in our art form and industry is an important field of study, even when the published results are as flawed as this particular volume. My problems with this book are several.

A book that purports to be an encyclopedia of black comics should be, you know, encyclopedic. Howard’s book is not. E.C. Stoner, who was possibly the first African-American comic book artist with work in Action Comics #1, does not have an entry. Trevor von Eeden, who has inspired many young black comics artist, what with him having entered the field while still a teen…and continuing to develop his talent in interesting ways…and standing up for his rights and those of others…does not have an entry. Dwayne McDuffie, one of the best writers and editors in comics, one of the most influential writers and editors in comics, a founder of Milestone Comics and a animation legend for shows like Justice League Unlimited and Static Shock, does not have an entry. When this book was discussed on my Facebook page, my friends came up with many other creators who were omitted from the book.

Howard has a clear bias towards academia and, as a result, the book gives considerable emphasis to fellow scholars. Some are worthy of inclusion, but not to the exclusion of Stoner, von Eeden, McDuffie and others.

There is an inconsistent use of the terms “creator” and “creation” that often makes assumptions as to who actually created the comics and characters discussed. Current industry standard is to note the writer and penciller of the first story to feature a character. An inker is not considered a primary creator. Someone who came along later is not considered a primary creator. This volume misuses the terms frequently.

So why am I recommending this seriously flawed work? Because even a flawed book about black comics and creators, even a flawed book that makes assumptions unsubstantiated by facts and tries to codify false narratives, expands our knowledge of comics creators of whom we might not have heard. I discovered at least a dozen such comics creators in reading this book and will be seeking out their work in the months to come.

We need a true encyclopedia of black comics. This book isn’t that encyclopedia. Maybe future editions will grow into that claim…or maybe the flaws of this book will inspire others to produce a more complete and inclusive study of these creators.

Finally, we have Superman and the Miserable, Rotten, No Fun, Really Bad Day by Dave Croatto with illustrations by Tom Richmond [MAD Books; $14.99]. Per the front cover: It’s a bird! It’s a plane! It’s a 100% unauthorized parody!

Back in March, I reviewed the similarly intended Goodnight Batcave by the same creative team. I praised that earlier parody as one of the funniest books I had read all year. Alas, this book didn’t so much as make me crack a smile. Maybe it was because the first book took much of its humor from deft mentions of Batman tropes. Maybe it’s because this book casts Superman as a whiner. Maybe it comes down to the source materials. Goodnight Moon is a better realized kids book than Alexander and the Terrible, Horrible, No Good, Very Bad Day. For whatever reason or reasons, this parody didn’t tickle my funny bone.  Hence, it receives no recommendation from me.

With a reminder Black Lightning: Cold Dead Hands #1 by yours truly and Clayton Henry will be in the comics shops early next month, I leave you with the promise/warning that I’ll be back next week with more reviews.