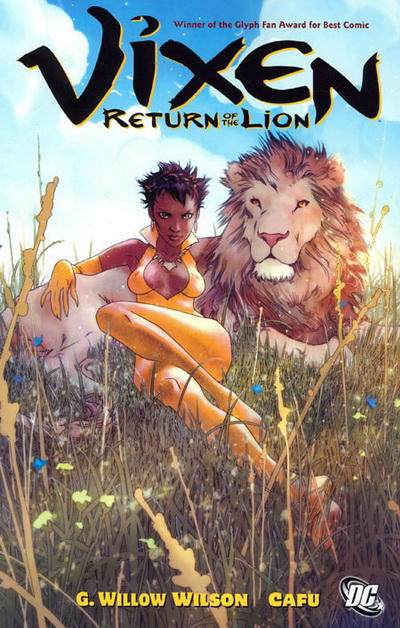 One of the best things about living in a time when comic books from the past are readily available is that it’s never too late to enjoy a great work you missed the first time around. Incredible as it now seems to me, I somehow never read 2009’s Vixen: Return of the Lion by G. Willow Wilson and Spanish artist/illustrator Cafu (Carlos Alberto Fernandez Urbano). Until now.

Vixen has always struck me as a great character waiting to become great. Though I’ve enjoyed her appearances in comic books, cartoons and the Legends of Tomorrow TV series, I never felt like I’d found “my” Vixen until this trade paperback collection of the five-issue mini-series. As Wilson writes and develops her, Mari McCabe is on the verge of discovering who she is and coming into her abilities to mimic any animal on Earth. Though she has been a super-hero and traveled to the stars as a member of the Justice League, McCabe is not truly Vixen until she returns to her native Zambesi in search of answers to her long-dead mother’s murder.

This is a painful journey for Mari, but she’s never less than the inspirational hero she’s meant to be. Even when she doubts herself. Beyond the character development, Wilson manages to do some really clever things with the story’s villain and include members of the Justice League without those heroes overpowering Mari’s role in the adventure.

Sidebar. I particularly liked Wilson’s use of Jefferson Pierce in this story. Too many writers have made Black Lightning subservient to Batman or Superman. In his appearance here, he is the equal of his teammates and reacts quickly and decisively to changing events on the ground.  Maybe I should add a collaboration with Willow on a Black Lightning/Vixen adventure to my lengthy bucket list of stuff I’d like to write before I kick the bucket.

Cafu’s art added considerably to my enjoyment of this story. He’s got a knack for drawing realistic and still dynamic super-heroes. His skill in drawing the human drama scenes was clear in every such scene. His African backgrounds were breathtaking. Add Cafu to the long list of artists I’d love to work with.

Vixen: Return of the Lion [DC; $17.99] is my pick of the week. It is readily available and is recommended for readers who love super-hero comics that go beyond the usual.

Super Gorillas Vs. The All-American Victory Legion by the late Alan Kupperberg [Charlton Neo; $7.99] is one of the most unusual comic books I’ve read recently. This is going to take some explanation. The two super-team stories in these issue – running 17 and 20 pages respectively – were written and drawn by Kupperberg as commissions in 2011 and 2013.  The team is mostly comprised of characters from the 1940s Centaur Comics, characters now in the public domain. The stories were found in Alan’s files by brother Paul Kupperberg, who realized these fun retro-style adventures would entertain not just Alan’s fans, but also fans of Golden and Silver Age storytelling.

As for Charlton Neo, it’s this wonderfully weird and goofy outfit that publishes all manner of fun comics featuring comics characters and comics genres only seen rarely in our industry. Are the comic books the stuff of Eisner Awards? No, they are not. But I’m buying, reading and getting a kick out of them, which is usually all I ask from my comics.

The hero line-up consists of Amazing Man, Blue Lady, Mystic Arrow, Dark Spider, Lightning and others. The simian super-villains in the cover story are the Green Gorilla, Kingorilla, Mighty Monkey and Kongster. In the second story, captured by the main foe of one of their number, the heroes are transported into the past and with no memories of their true selves. The concepts for the two tales are  credited to Stan Brown.

As with the Justice League stories of the early 1960s, the heroes are generally split off into teams of two and three. Kupperberg’s writing is straightforward and captures the spirit of these comics classics. His art is equally straightforward. It’s solid stuff on all fronts.

Alan was a pal of mine. We worked together on a number of stories for Marvel Comics editor Jim Salicrup. I enjoyed that a great deal, especially our Rocket Racer shorts, even though they were hidden in the back of Spider-Man annuals and, of all things, the Spider-Man reprints in Marvel Tales. I loved seeing new work from my friend. I think you’ll have fun with this comic book as well. 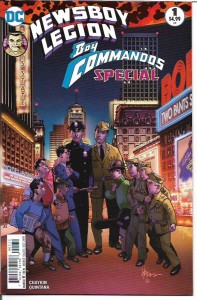 DC’s limited special events have been fun. The teaming of DC heroes with Warner Bros. cartoon characters had me cackling with delight from start to finish. Recently, to honor the legendary Jack Kirby on what would have been his hundredth birthday, the publisher did a series of 48-page specials featuring Kirby creations in brand-new stories by some of our best and most interesting comics creators. The special that went to the top of my reading pile was The Newsboy Legion and the Boy Commandos Special #1 by Howard Chaykin [$4.99].

The Newsboy Legion are my favorite of Joe Simon’s and Jack Kirby’s 1940s creations for DC Comics. The duo had a knack for kid gangs. Teaming them with my second favorite of their 1940s DC creations – the Boy Commandos – made this special issue a must-have for me and it did not disappoint.

Chaykin’s writing and art are more realistic than the Simon/Kirby original stories, but they definitely manage to emulate that crazy 1940s vibe. The 27-page “A Separate Peace in Pieces” finds most of the super-heroes fighting the Axis powers overseas. That leaves the kids to deal with Nazi fifth columnists in New York. Chaykin knows his history and, telling this story seven decades after World War II, his knowledge informs the action and adventure. Kudos are also due colorist Wil Quintana and letterer Ken Bruzenak. This special looks great!

Adding to the fun is a reprint of “Cabbages and Comics” from Star Spangled Comics #29 [February 1944]. The Newsboys try to make money by publishing their own comic book – Suicide Slum Comics – based on themselves and their neighbors. Since some of those neighbors are criminals, well, let’s just say comic-book criticism was every bit as crude and rough as it is online today.

Some readers won’t care for Chaykin’s version of these characters. But, from where I sit, we get the best of two worlds. A modern take on the World War II heroes and a classic reprint. This comic book was five bucks well-spent.