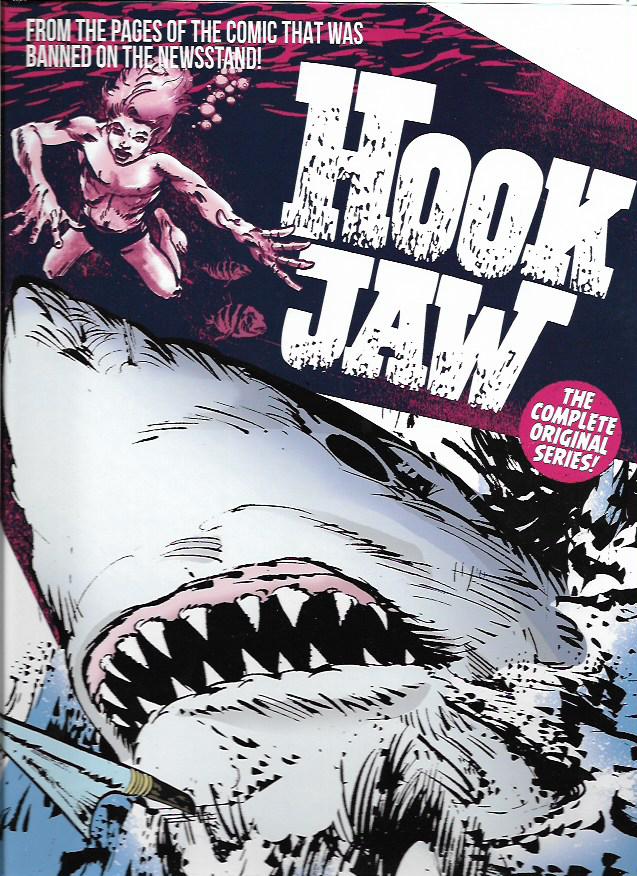 I still remember my first viewing of Jaws. It was 1975. I lived in the “penthouse” apartment of a less-than-stellar New York hotel so close to Times Square I could see pretty much everything there from my roof.  Someday I will tell you all the stories of my years at the Hotel Consulate.

It was summer. I had visitors from my native Cleveland: my friend from childhood Terry Fairbanks, his wife Nora Joyce and their niece Barbara Kepke, who I would marry after a courtship so long it could have gotten its own driver’s license. The ladies had gone shopping. Terry and I went to see Jaws.

Jaws was and remains a powerful film. The night after I saw it, I had a nightmare about a shark circling my living room couch. I knew it would inspire countless imitations. I predicted one of the first ones would be “Jaws on land” and, lo and behold, less than a year later and accompanied by a spiffy Neal Adams poster, Grizzly was in the same theater where I saw Jaws.

Comic books did not jump on the Jaws bandwagon with enthusiasm. We got a couple one-off super-hero stories with sharks. Marvel adapted Jaws 2. But it was comics men from across the Atlantic who created the definitive shark comics.

The Hookjaw Classic Collection [Titan Comics; $34.99] reprints the complete series about the baddest great white shark of them all in a handsome oversized hardcover volume. Created by Pat Mills, this scary serial was the highlight of the newly-released Action, a boys weekly that mostly imitated American thrillers, infusing its pages with glorious bloodshed and violence.

Writers Mills and Ken Armstrong, working with artists who’d likely never had to draw such carnage previously, had a mandate that each three-to-five-page installment of Hookjaw had to have at least one gory and interesting death. Alas, there were those who took great offense to such entertaining mayhem in a “children’s” comic weekly. Action was first diminished and then cancelled.

I had seen the odd Hookjaw chapter here and there. I loved it from the moment. The shark was something of a eco-hero, driven to dining on humans when they did terrible things like drill for oil in his neighborhood. Okay, I’ll admit that element of the series is kind of so subtle you could miss it. As far as I was concerned, Hookjaw needed no socially redeeming elements. It was an exciting series, filled with unexpected surprises and the knowledge no character was safe from being on the great white’s lunch menu.

Hookjaw Classics Collection fulfills my decades-long desire to have all of the Hookjaw material in one volume. It’s got the original stories. It’s got special stories from annuals. It’s got the lost pages from the final serial that was sanitized and terminated too soon as Action was circling the drain.

Since I like to point out such things, I’ll mention that this book would make a terrific gift for fans of British comics, students of British comics history, fans of Pat Mills (one of the best comics writers of our time), fans of shark movies and, in general, fans of “nature bites back” fiction. Indeed, since Action was banned from British newsstands, supporters of the First Amendment should also consider buying it. Okay, that’s a stretch maybe, but I just love this book. It’s my pick of the week.

Drew Friedman’s Heroes Of The Comics: Portraits Of The Pioneering Legends Of Comic Books [Fantagraphics Books; $34.99] has received considerable praise. I won’t say that praise is unfounded. Still, my reaction to the 2014 book was…disappointment.

Friedman’s portraits are outstanding works of arts. Yet, with rare exception, they are portraits of these comics creators as elderly men and women. I would have loved to have seen his drawings of such great creators when they were in their prime. After a while, I felt like I was looking through a senior citizens home yearbook.

My biggest disappointment came from the texts that accompanied each of the portraits. These texts have a great deal of misinformation in them. Some of the misinformation are errors of fact. Others are errors of bias as Friedman apparently subscribes to the established  Fantagraphics bias against certain creators.

I had wanted Heroes of the Comics for years. I figured it would be a nice addition to my comics history library. Instead, it will end up in one of my Vast Accumulation of Stuff garage sales.

Heroes of the Comics isn’t without merit, but I can’t recommended it.  That also disappoints me. 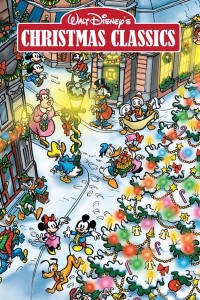 Walt Disney’s Christmas Classics [Boom! Kids; $24.99] came out in 2009, but there are copies to be had in the secondary markets and often at very low prices. The full-color hardcover book is over a hundred pages of comic-book delights by Cark Barks, Walt Kelly, Jack Hannan, Romano Scarpa and others.

I love this book. “Christmas on Bear Mountain” by Barks is clearly one of his best with its delightful use of Uncle Scrooge and sheer dumb luck on Donald’s part. Mickey Mouse stars in Scarpa’s “It’s a Wonderful Christmas Story” and it’s a great take on the legendary It’s a Wonderful Life. “Best Christmas” by Barks is a gem that does not get the recognition it deserves. Likewise his “Santa’s Stormy Visit!” There are a lot of smiles in this thin volume.

By its very nature, Walt Disney’s Christmas Classics would make a fantastic holiday gift. Older readers can read the stories to the younger readers. When Disney comics stories are at their best, as are the ones collected herein, there are timeless tales every bit as enjoyable now as they were when they were first published. This book is worth the search.