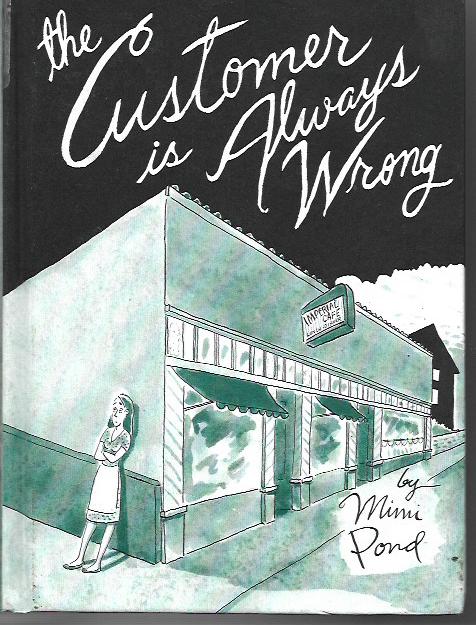 Every book I’m reviewing this week ties for my “Pick of the Week.” It’s been a darn good week.

I’m not sure when I first saw the work of cartoonist Mimi Pond. It might have been in, of all things, the pages of Seventeen Magazine when I was doing “I Cover the Newsstand,” my Comics Buyer’s Guide column reporting on comics material running in mainstream magazines and the like. It could have been in National Lampoon or the other magazines that published her. I do remember that, from the moment I saw her work, I knew she was a cartoonist worth following.

The Customer is Always Wrong [Drawn and Quarterly; $29.95] might be her magnum opus. Weighing in at 448 pages and over two-and-a-half pounds, this graphic novel is a semi-autobiographical coming-of-age story about a post-college cartoonist working in a restaurant with sketchy co-workers and customers. Set in Oakland in the late 1970s, I can’t testify as to how well it captures that city. But I can say Pond’s depiction of the era matches my memories of those long-ago years. I knew people who could’ve posed for some of her supporting characters, though, thankfully, those dealing drugs knew enough to keep that nonsense away from me.

Customer is a brilliant and challenging work. It was hard for me to watch scene after scene of characters doing self-destructive things to themselves and others. Even “Madge” – Pond’s doppleganger in the book – makes her share of unfortunate choices. What kept me reading was Pond’s mastery of comics storytelling and my rooting for Madge as she navigated a world of drunks, junkies, con artists and just plain creepy people.  That Pond delivers a very satisfying ending to this graphic memoir is why I recommend it to you.

Much to my excitement, in researching this review, I learned of a number of other Mimi Pond works I hadn’t known of. I’ll be looking for them as soon as I finish this week’s “Tony’s Tips!” column. It is a hunt that excites me.

The Customer is Always Wrong is recommend for older teens and up. It should be in every college and public library and probably most high school libraries. Needless to say, it would also make a great gift for the graphic novel devotee in your life. 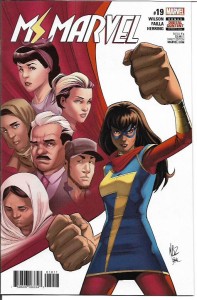 Ms. Marvel has been one of my favorite current comics since Marvel introduced the title heroine in 2013. Muslim teenager and Inhuman Kamala Kahn is an inspirational and realistic character. Created by editors Sana Amanat and Stephen Wacker, writer G. Willow Wilson and artist Adrian Alphona, Kamala has managed to appear in the various Marvel “events” without losing the core quality of her stories and character development.

Wilson reached new heights with Ms. Marvel #19-22 [Marvel; $3.99 per issue]. In “Mecca,” an old enemy of the heroine has now joined forces with a Hydra-connected politician who brings his own police force to Kamala’s New Jersey home. It is a frightening story that echoes the anti-immigrant and white supremacist words and deeds of our current presidential administration. I’ve always liked super-hero comics with at least one foot in the real world and this tale fits the bill.

Wilson’s writing is as good as the best in our industry. She had me on the edge of my seat throughout the four issues and feeling more than a little sick to my stomach at the realization that Kamala’s super-heroic world isn’t all that different from mine. Artist Marco  Failla brought home the emotion of this story in the art with color artist Ian Herring pulling it all together. When the artsy-fartsy crowd turn up their noses at super-hero comic books in general, I’m able to point to Ms. Marvel as being as relevant and well-crafted as the best of their indy or alternative darlings.

Coming in December, Ms. Marvel Vol. 8: Mecca [$17.99] will reprint Ms.  Marvel #19-24 in trade paperback. I hope this book comes out in time for holiday gift-giving because it would be a perfect present for any number of people on my list…and probably on your lists as well. Not to mention being suitable for all ages and a series that should be in every public and school library. 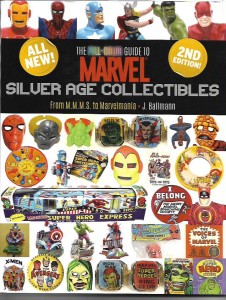 I had a ball reading and reveling in The Full-Color Guide to Marvel Silver Age Collectibles: From MMMS to Marvelmania by J. Ballmann [Total Mojo Productions; $29.95]. Published in 2014, this second edition catalogues Marvel comic-related goodies from the 1960s. It has toys, posters, t-shirts, gumball items, games, model kits, fan club items and pretty much anything else you can think of. The 172-page book has over 1,400 pictures of this stuff. My reactions on seeing these treasures ranged from “I had that!” to “I never even heard of that!” to “Man, I hope some of this stuff turns up in my Vast Accumulation of Stuff.”

This book is fun and informative. It was delight to see the items contained in the book and, at the same time, I learned a bunch of facts about them that I never knew. The back cover says this book was twelve years in the making. After reading a few pages of this obsessively complete volume, I don’t doubt this for even the merest moment. It’s a wonderful book on every level.

Yes, I’m doing my “this would make a great holiday gift” shout-outs early this year, but, by Odin’s beard, this book would make a fine gift for all sorts of people. Know someone who was an avid Marvel readers as a youngster? They’ll get a kick out of this. Or someone who never stopped reading Marvel comic books from the 1960s to the present. Or someone who loves Marvel collectibles. Or someone who just wants to learn more about the formative years of one of the most popular phenomena in comics history.

Ballmann’s terrific tome is suitable for all ages and deserves to be in every public, school and Marvelites library. You might have to pay more than the original cover price, but it’ll be worth it.

That’s all for now. I will be back next week with more reviews and holiday gift suggestions.