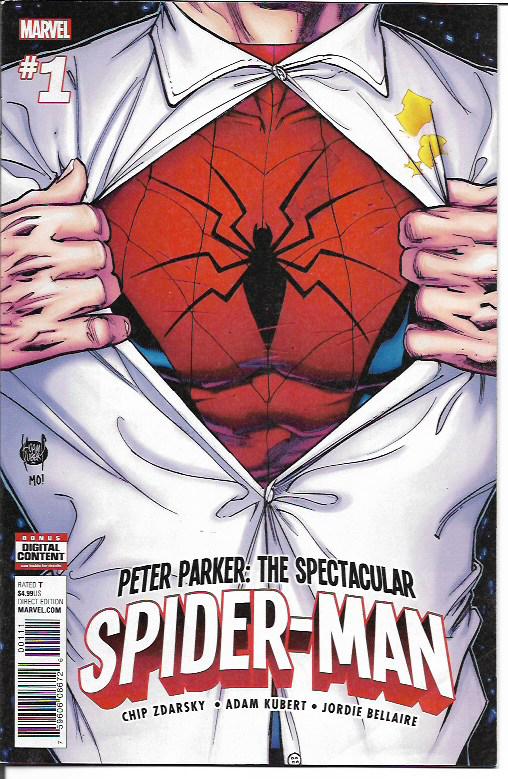 My favorite Marvel Comics titles are the titles I can read without worrying overmuch about what’s going on in the soul-crushing events that overwhelm that fictional universe with a regularity I wish my aging body possessed. Captain America might be Captain Nazi in all the other titles. Captain Marvel might be the enemy of basic civil rights. Some other hero might be decapitating Sub-Mariner, who, if I’m correct, has gotten better since losing his head. None of that matters in my favorite titles. They entertain me with but passing references to that other nonsense.

Peter Parker: The Spectacular Spider-Man by writer Chip Zdarsky with artist Adam Kubert [$4.99 for the premiere issue; $3.99 after that] is well on its way to being one of my favorite titles. It’s got a sense of humor to it without minimizing the dire perils our heroes face in the three issues I’ve read. I said “heroes” because the Human Torch has been hanging with Spidey here and because the issues also feature Teresa Parker, Peter’s maybe/maybe not sister. I like them all.

Zdarsky doesn’t ignore the “Peter Parker is like this technological billionaire” stuff that’s going on in other Spider-Man titles, but he doesn’t focus on it. He brings in some crazy continuity from a few Spider-Man adventures I’d forgotten about, but his scripts have enough information, often charmingly presented, that I can follow the stories without resorting to Wikipedia. Most importantly, he’s bringing a honest sense of humor to Spidey. With too many writers, that humor comes off as forced. They’re trying too hard. Zdarsky? It seems to come naturally to him.

Kubert’s art is the kind of art I like to see in super-hero comics. It’s big and bold for the action sequences and comes down to Earth for the human scenes. Color artist Jordie Bellaire does an amazing job complementing Kubert’s drawings without overwhelming them. This is a nice-looking comic book.

What? You need more hooks to get you interested? Okay…

The Terrible Tinkerer has a kid brother. He’s a good guy and he’s very cool. Teresa is being hunted by rogue S.H.I.E.L.D. agents who want information she’s injected into her own body. Spider-Man has met and might be dating a gorgeous stand-up comedian. The Kingpin is in there, too. He’s become an even more fascinating character as he seeks to project a new image as a wealthy benefactor/protector to the city he claims to love. New York, New York.

This December, Marvel will collect the first six issues of this new title in Peter Parker: The Spectacular Spider-Man Vol. 1: Into the Twilight [$17.99]. If may or may not be out in time for Christmas and other seasonal holiday gift-giving, but, if it is, it could be a swell gift for the Spider-Fan in your life. 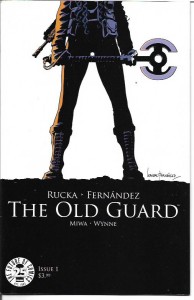 From earlier this year, The Old Guard #1-5 by Greg Rucka with art by Leandro Fernandez [Image; $3.99 per issue] is the first of what is planned to be a five-volume series about immortals living among us. It’s not that these men and women can’t die. They can die, but they never know which “death” will be the one they don’t come back from. But that’s close enough to immortality that the rich and the powerful will do anything to be like them.

Andy, Nicky, Joe and Book have lived for hundreds and thousands of years. They work as mercenaries, but guard their immortality from even their most trusted customers. Nile is a new immortal. Whenever a new immortal is activated, the others know about it and reach out to that person.

In this initial series, they are betrayed by someone they trusted.  It is not pretty. Some of them have been captured. Others will do whatever it takes to rescue their friends. It’s a violent tale of loyalty and consequences.

Rucka is a writer I can usually count on to deliver a good story, and this series is no exception to that. It’s not an award-winner, but it’s a solid adventure yarn. Fernandez’s art does a good job of supporting the story, the action, the characters and those afore-mentioned consequences. I’ll keep reading this one.

These first five issues have been reprinted in The Old Guard Book One: Opening Fire [$16.99]. If your tastes run more for adventure without costumed characters, or if your tastes are as all over the creative map as mine, you’ll enjoy this series. 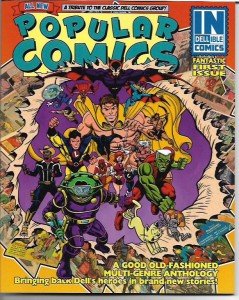 My pick of the week is probably the most unusual pick of the week I’ve done in this column. It’s an anthology comic book produced by mostly comics fans and meant to be “a tribute to the classic Dell Comics Group.” At $11.99 for 64 pages of stories, All-New Popular Comics doesn’t deliver a lot of bang for your bucks. What it does deliver is the obvious delight that the fans had working either on characters they love or characters somewhat similar to those they love. What’s in and not in the public domain is a tricky puzzle to solve these days.

The lead feature is “Tom Corbett, Space Cadet” based on the popular media hero from the 1950s. Having just read the actual Dell comic books starring Corbett, I have to say this story failed to capture the essence of the title or characters. There was one character bit that worked for me, but it was one of the most repetitive cliches of the Dell comic books. That’s the case with most of the stories. They just don’t get it right.

There were elements of this comic book I liked. Ken McFarlane took writer Jim Ludwig’s creaky joke and drew a good looking example of a teen girl humor strip. However, Ludwig redeemed himself with an interesting (but too short) meeting of the Fab Four and a group of Dell’s monster heroes. Ludwig also wrote and drew a funny parody of various Dell medical characters.

Sandy Carruthers did a dynamite full-page drawing of Kona facing a giant sea monster. Dave Noe wrote an amusing take-off of “Casey at the Bat” featuring a plethora of Dell heroes. Noe and artist Robert Schaupp did a tolerable Lobo story, but failed to really convey the landmark western character, arguably the full African-American hero to headline his own comics title.

Ultimately, though I got a kick out of this issue, Popular Comics tried to do too much and include too many features. It also lacked the editorial discernment to realize that some of the features and some of the writing and some of the art was simply not up to even the rawest of professional standards. It is an ambitious fanzine, but it’s not a terrific comic book.

Going forward, if All-New Popular Comics continues, it needs to be more selective. Fewer stories, longer stories and higher standards. For example, while I assume the various horror and sci-fi shorts were meant to recall Dell’s anthology titles of the 1960s, there’s nothing in them that screams “Dell” or “John Stanley.” Much better, I think, to devote that space to the character strips.

Despite my criticism, I recommend All-New Popular Comics for older readers who remember the days of the Dell comics it honors and the old fanzines wherein myself and other future professionals learned the rudiments of our craft. “Fun” is a good place to start, but it is still just a start.