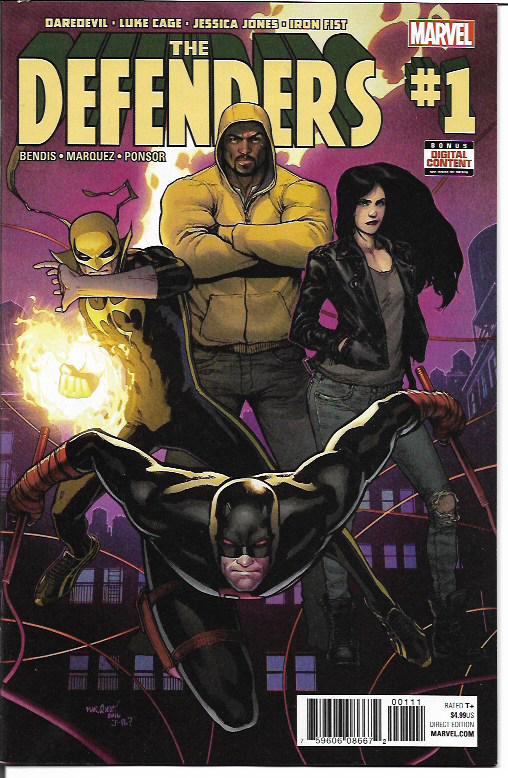 Stronger together. Even in these divisive times, that notion should be a no-brainer. The caveat, of course, is that the people who come together must have good hearts and minds. Sorry, Nazis and white supremacists, by your very natures, you’re not invited to this kind of party. Yeah, I know, I’m so intolerant.

For this edition of Tony’s Tips, I’m looking at three super-teams from Marvel Comics. All of them have strong ties to Marvel’s vast history, but all of them are new as well.

I wasn’t bowled over by the preview of the new Defenders comic book when I read it in one of Marvel’s Free Comic Book Day offerings. I didn’t think the transition from the Netflix versions of the heroes to their comic-book counterparts was a smooth one. I wasn’t at all convinced Diamondback was a powerful enough “big bad” to lead off the new series. But I liked the Brian Michael Bendis (writer) and David Marquez (artist) preview enough to order the series from my friendly online comics supplier. That turns out to have been one of my better calls.

Having read The Defenders #1-4 ($4.99 for the first ish, $3.99 per issue for the others), I like the way this series is progressing. Bendis and Marquez have mastered the tightrope walk between comic-book and live-action storytelling. If a reader is new to the comic books, he’ll recognize the heroes from the Netflix series. That new reader might be thrown by some divergent elements – such as Jessica and Luke being married and having had a child – but the characters are pretty faithful to both of their incarnations.

Diamondback has proven himself to be formidable, but there’s also a hint that he’s not the actual “big bad” of this initial Defenders storyline. There is a real sense of menace to the ongoing serial. I’m eager to see what comes next.

I’m recommending The Defenders. Avid super-team readers will find much to enjoy in the title, even more so if, like me, they tend to prefer street-level heroes. Newcomers to comic books will be able to follow this series easily and without worrying about the rest of the vast Marvel Comics Universe.

Defenders Vol. 1: Diamonds Are Forever [$15.99] will be released in late December. It will contain the Free Comic Book Day preview and the first six issues of this ongoing title. The timing is a little off for a Christmas present, but somebody you love must have their birthday early in 2018. 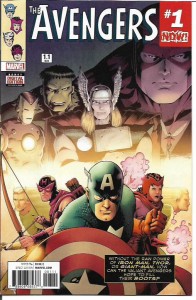 My pick of the week is the oddly-numbered, five-issue Avengers by writer Mark Waid with art mostly by Barry Kitson (pencils) and Mark Farmer (inks). The “mostly” is because we start getting additional inkers by #3.1 and additional pencilers for the final issue of the series [$3.99 per issue].

The five issues take place between Avengers #16 [May 1965) and #17 of the original series. The founding members of the super-team have handed it off to Captain America and given him three replacements  – Hawkeye, Quicksilver, Scarlet Witch – who are clearly less mighty than the heroes they are replacing – and who the public has known as villains in the recent past. That’s an awful lot to ask of pre-Nazi Cap, though it was great seeing the real deal in new stories again. Even if those stories were set in the past.

Things do not go smoothly for the new team. They are outmatched by their opponents. They have personal disagreements more extreme than those we saw in 1965. And…no, that’s all you’re going to get from me. No further spoilers. I want you to read the series free of any preconceptions. You’ll thank me for that.

The series has been collected in Avengers: Four [$15.99]. Waid’s at the top of his game. The art is amazing. The characters and their dire circumstances are engrossing. This would make a great gift for that super-team fan in your life. 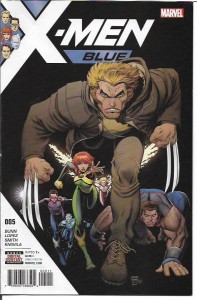 Most current X-Men books leave me unimpressed and uninterested, but I have been enjoying X-Men Blue [$3.99 per issue] by writer Cullen Bunn with various artists. This title stars the original teenaged X-Men who were brought to the present because grown-up Hank McCoy was kind of an idiot. They miss their old lives. This is why they are blue. That’s my story and I’m sticking to it.

The old/young X-Men are trapped in a world their adult selves made. Most of them are struggling not to be as messed up as those adult counterparts. Teenage Hank is looking for a brand-new way to be an idiot by mastering magic. Maybe that’ll work out.

Actually, the young X-Men are a pretty interesting group. They are working (secretly) with Magneto, but they don’t trust him. Already, they are smarter than the grown-ups. Jean Grey carries the heaviest burden because she doesn’t want to go all Phoenix-crazy on her new world. Cyclops, Angel and Iceman are all very sane. They have been joined by a son of Wolverine from a different universe, which makes me sigh but alternative realities are like crack to X-Men writers. They just can’t say “no” to them.

I know it sounds like I’m damning this book with faint praise, but I’m being kind of a jerk. It’s well-written, well-drawn and I want to see what happens next. On my scorecard, that adds up to a pretty good comic book.

One last note. Black Lightning: Cold Dead Hands #1 [$3.99] by yours truly and artist Clayton Henry is now available for pre-order. I’m pretty proud of this new series, so I hope you’ll consider buying it. Thanks.