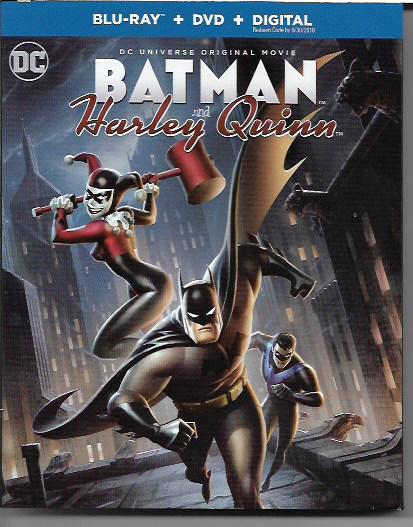 The smarter half of my brain has been telling me I need to relax a bit more. With no tropical beach in sight, I decided to watch DVDs and TV shows. The upside of this is…no chance of getting sunburn. The downside…no refreshing fruity drinks delivered by scantily-clad waitresses, or, for those so inclined, waiters. I’m totally cool with equal-opportunity fantasies. However, even without those tall refreshing drinks and, you know, the other thing, I still had a pretty good time in front of my TV set.

Batman and Harley Quinn [DC Entertainment/Warner Bros. Animation] is my pick of the week. Directed by Sam Liu from a story by Bruce Timm and a teleplay by Timm and James Krieg, this is a hilarious dark comedy which is able to feature both big laughs and touching emotional moments without ever taking the viewer out of the movie. Here’s the Wikipedia summary:

Batman and Nightwing form an uneasy but needed alliance with Harley Quinn to stop Poison Ivy and [the] Floronic Man from transforming people into plants.

Batman is voiced by the great Kevin Conroy. Melissa Rauch is pitch-perfect as Harley. Other actors include the excellent Loren Lester as Nightwing, the always delectable Paget Brewster as Poison Ivy and the ever-commanding Kevin Michael Richardson as Jason Woodrue. Also in the cast: John DiMaggio, Eric Bauza, Robin Atkin Downes, Trevor Devall, Rob Paulsen, Mindy Sterling, and, in a funny scene, Bruce Timm as an unseen Booster Gold. Every performance was solid. Kudos to casting director Wes Gleason.

If you’ll excuse some MILD SPOILERS…

Released from prison, Harley is working as a waitress in a sleazy club called Superbabes. Check out the walls of said establishment for some classic DC Comics artwork.

Batman and Nightwing are, indeed, reluctant to recruit Harley for this mission. Harley is torn between the necessity of saving the world and her friendship with Ivy. These conflicts ring very true and add to the depth of the feature.

Plus: Harley and Nightwing have a moment. Exactly what that means is open to interpretation – I know what I think happened – and it does not please Batman. Nightwing’s under-the-breath muttering is one of the best lines in the movie.

If I have any complaint about this movie, it’s that DC and Warner neglected to include credits for several comics creators who should have been there: Gardner Fox and Gil Kane for Jason Woodrue, Robert  Kanigher and Sheldon Moldoff for Poison Ivy, and Pat Misulli, Joe Gill and Dick Giordano for Sarge Steel. DC has gotten much better at this, but there’s room for improvement.

I bought the Blu-Ray/DVD/Digital version of the movie, originally priced at $24.98. The special features include “The Harley Effect,” “Loren Lester: In His Own Voice,” two Harley cartoons from Batman: The Animated Series, and a peak at the animated Batman: Gotham by Gaslight. I’m going to pre-order Gotham by Gaslight as soon as it becomes available for pre-order.

If you loved Batman: The Animated Series, you’ll enjoy this movie. I’d love to see more like it. 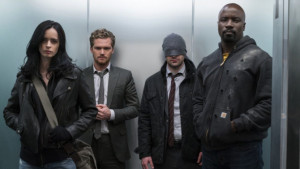 A couple weeks back, I wrote about seeing the first two episodes of Marvel’s Defenders at a special screening in New York. After the series started streaming on Netflix, my son Eddie and I watched the remaining six episodes. Here are my thoughts on the entire series with some SPOILERS.

Most of the leads and supporting players were terrific throughout. I was critical of Finn Jones’ performance as Danny Rand/Iron Fist in the first two episodes, but he upped his game when he had scenes with Charlie Cox (Matt Murdock) Krysten Ritter (Jessica Jones) and Mike Colter (Luke Cage) in the remaining episodes. As did Jessica Henwick (Colleen Wing).

The villains were all over the map. Sigourney Weaver as Alexandra started out real scary and became less so as the series progressed.  Elodie Yung’s Elektra Natchios was never convincing. Wai Ching Ho’s Madame Gao was sometimes subservient, which I later realized came from her remarkable guile, and sometimes scary. Ramon Rodriguez’s Bakuto was a scenery-chewing joke from the moment he showed up in this series and his performance torpedoed a pivotal scene with the always wonderful Simone Messick as Misty Knight.

As much as I loved the leading players and supporting cast members from the previous Netflix series, The Defenders took a nose dive in the final two episodes. That’s when smart people, both heroes and villains, started doing monumentally stupid things. I loathe when that happens because it takes me right out of whatever movie or TV series I’m watching. Because of that flaw, the best grade I’m able to give The Defenders is a B-.

My disappointment in The Defenders doesn’t keep from me being very excited for the next seasons of Daredevil, Jessica Jones and Luke Cage, or the debut of the Punisher. I’m hoping the writers of those series don’t fall back on the “smart people, stupid moves” device. These characters deserve better. 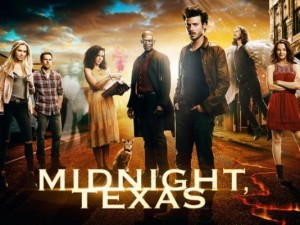 Based on a series of novels by Charlaine Harris, Midnight, Texas is sort of like a supernatural super-hero team comic book. The title city is a sanctuary for supernatural beings. It sits on a weakening barrier between Hell and Earth and this draws other not-so-benign  supernatural beings to the town. The ten-episode season debuted on July 24, on NBC.

The “team” is an interesting mix. The lead protagonist is a psychic on the run from an old enemy, accompanied by his granny’s ghost, who only he can see. There’s a vampire whose lover is an assassin, albeit a human assassin. There’s a were-tiger preacher. There’s a witch. And there’s a pair of gay angels who hide their true selves because other heavenly agents would come looking for them and not to bring them wedding gifts. To be clear, the angels hide that they are angels and not that they are gay.

The humans in the town include the psychic’s girlfriend, her really dysfunctional family, and a man trying to make amends for his past as the son of a white supremacist leader. Other human residents may suspect or even know some of their neighbors are different, but do not seem to care. Outsiders are fearful of the town, but still stop by every now and then to carry out some mischief. As I said, this is an interesting mix with a monster-of-the-week sensibility that reminds me of early Buffy the Vampire Slayer, Supernatural, Night Stalker and the non-mythology episodes of X-Files.

Midnight, Texas isn’t as amazing as any of those series, but it is a solidly entertaining show. The acting is good to excellent, as is the writing. In the six episodes I’ve seen, three major storylines have been brought to satisfying conclusions. I’m already hoping it gets picked up for a second season.

That’s all for now. I will be back next week with reviews of three, honest-to-Odin actual Marvel Comics super-team comics books. Which three? Ah, that would be telling. See you then.