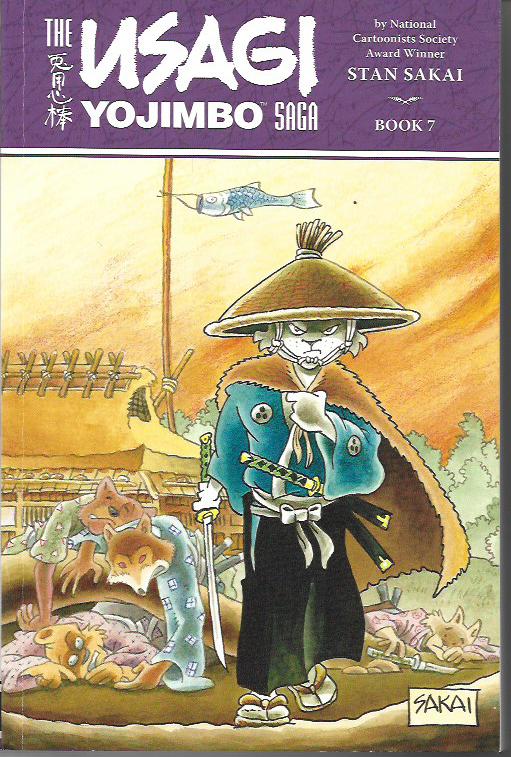 This week’s pick of the week is Usagi Yojimbo Saga Volume 7 by Stan Sakai [Dark Horse; $24.99]. The 624-page trade paperback collects Usagi Yojimbo Volume Three #117-138 and 2009’s Free Comic Book Day story, “One Dark and Stormy Night.” It’s hard for me to imagine a week when Usagi Yojimbo wouldn’t be my top pick. Since 1984, there is no cartoonist who’s created more consistently exceptional work. If you asked me to name the world’s greatest living cartoonist, my answer, without hesitation, would be Stan Sakai.

Usagi Yojimbo is set at the start of Japan’s Edo period, which ran from 1603 to 1868. Miyamoto Usgai, is a rabbit warrior, masterless since his lord died in battle. Based partly on the famous swordsman Miyamoto Musashi, the ronin travels across the land on a warrior’s pilgrimage. He often interacts with the many friends he has made on his journeys and sometimes works as a bodyguard or bounty hunter. His skill is astounding. His compassion, courage and firm sense of justice are the equal of his fighting prowess.

For a little over a year, I’ve been reading Usagi Yojimbo from the feature’s beginning. I started with the two-volume collection from Fantagraphics and have continued with the Dark Horse books. I tried to read one story each day to make sure that I would read at least one great comics story every day.

In this volume, Usagi has to protect his somewhat larcenous friends Kitsune and Kiyoko and, in doing so, must face an evil wizard and said mage’s zombie warriors. In another story arc, the ronin must examine his feelings about honor and vengeance. In other tales, he becomes embroiled with crime gangs and outlaws. Sakai creates each of the adventures with a sure sense of character and storytelling, backed up by meticulous research in all the elements of the tales. Simply put, I am in awe of this cartoonist.

The next collection, due out this month, is The Usagi Yojimbo Saga: Legends. This unnumbered volume gathers some of the warrior’s most intriguing tales, including Senso, Yokai, and the long out of print Space Usagi. It will weigh in at 557 pages.

Usagi Yojimbo is a masterpiece of the comics art form. It belongs in the home library of every serious comics reader, as well as in every public and school library across the land. If the series is not already being studied as the great literature it is, it should be. It is an ongoing work of art. 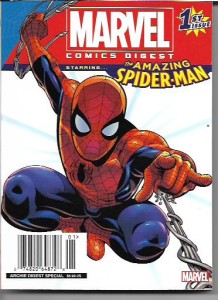 Archie Comics have partnered with Marvel Comics to launch a series of digests reprinting the latter’s super-hero tales. Marvel Comics Digest #1 [July 2017; $6.99] features over 200 pages of Spider-Man stories in Archie’s standard 6.5″ by 5″ format.

This debut issue leads off with 1966’s “Just a Guy Named Joe,” the last Spider-Man story drawn by Steve Ditko, who also plotted this off-beat story of a boxer who gains super-powers. Stan Lee scripted the story.  That’s followed by a four-issue arc by Len Wein and Ross Andru from 1976. After that, we get more recent tales from various Spider-Man titles that retold earlier adventures or were out of the traditional Marvel continuity, including some based on the cartoon shows. One of the latter teams Spidey with Deadpool.

More than any other comics publisher, Archie rules the supermarket. The company pays dearly for check-out counter space, but does well with it.  Adding Marvel to the mix – the second issue of the digest series will feature the Avengers – is a smart move. I’m expecting we will see other Marvel heroes from the movies and maybe even TV appearing in digest form.

It would also be smart for Archie to work with DC in the same way. I think a DC Superhero Girls or Wonder Woman digest would sell very well these days, especially considering it would be seen by female and male shoppers with daughters. Those are potential comics buyers who don’t frequent comic-book shops.

I recommend Marvel Comics Digest for fun summer reading and, come the holidays, for stocking stuffers. 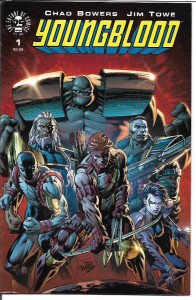 Rob Liefeld’s Youngblood [Image; $3.99 per issue] has returned with new characters, new creators and a new situation for the heroes old and new.  I’ve read the first two issues of the title and plan to continue reading it.

I’m not very familiar with Youngblood in its various incarnations. The background of this new series is still unfolding in these two issues, but, someone along the past line, Youngblood became known as the world’s most infamous super-team. One of its members is now the president of the United States and another is suffering from a terminal condition. Young heroes are emerging and kind of sort of working together. When one goes missing, others launch the search to find him. Their efforts are met with opposition from yet another member of the original team.

Writer Chad Bowers does a good job here, though more clarity would be welcome. Likewise, more and quicker background information. Jim Towe’s art is pretty good as well. The bottom line is that this is a solid super-hero comic book.

Being pretty much a universe unto itself, Youngblood is the kind of super-hero comic that should appeal to those who find Marvel’s and DC’s super-hero universe too vast. I recommend it as a change-of-pace for those readers.

That’s all for this week. I’ll be back next week with more reviews and maybe a surprise or two.