I’m just back from G-Fest, the biggest and best Godzilla convention on this side of the world. I had a wonderful time there, but that pleasure comes at a cost: this week’s column is running late. I’m determined to get my crazy schedule under control, so, hopefully, we’ll be back on track by next week.

The early Sabrina is my favorite version of the character. She is not evil, just selfish and thoughtless in the manner of many young people then and now. She was originally drawn with a devilish mien about her, a dangerously sexy look. Alas, her appearance was soften over the years.

Following an introduction by Archie Comics editor-in-chief Victor Gorelick, we get the first Sabrina story from Archie’s Mad House #22 [October 1962] by writer George Gladir, penciler Dan DeCarlo and inker Rudy Lapick. In just five pages, we learn everything we need to know about Sabrina, including her envy of the lives/loves of ordinary teenage girls. It’s a classic introduction.

Della the Head Witch was the next regular character to be added to the Sabrina stories. Aunt Hilda didn’t come along until 1964 and, apart from an earlier one-shot appearance, Aunt Zelda wasn’t added to the ongoing cast until 1971. There’s a one-shot crossover with Mad House’s Ronald the Rubber Boy early on with Sabrina not being placed in the Archie Universe until the success of the Archie songs and TV series made it advantageous to tie the teenage witch to the better-known characters. Even so, there were long-ish periods when Sabrina didn’t appear in solo stories or at all.

Though DeCarlo is the best of the Sabrina artists, there are some interesting and very good interpretations by other artists. There were a handful of stories drawn by Bill Kreese and Gus LeMoine. I’m fond of the LeMoine work and would rank him just below DeCarlo and tied with Stan Goldberg.

The early stories are the most fun for me, but the Archie Universe ones have their moments. When Al Hartley comes in to write and draw Sabrina for some Christmas specials, his religious proselytizing is a tad heavy-handed for my tastes.

The bottom line: I love having all these Sabrina stories collected in one volume. I’ve always liked the character and seeing how she was developed over her first decade of comics life is interesting. This book is a must-have for Sabrina and Archie fans and would be a swell stocking stuffer come the winter holidays. 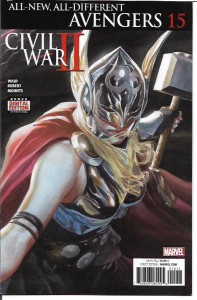 The Marvel Comics super-hero universe is a complicated creature and I’m not ashamed to admit it’s too convoluted for me to follow with any confidence. Which doesn’t mean I don’t enjoy many Marvel titles within that universe.

I take the position that each individual title is its own universe. It probably connects to other titles, but I don’t worry about that. If I try to figure out why some characters are appearing in several titles simultaneously, my head will explode. Most of us would not want that to happen.

There are approximately 3000 Avengers appearing in 127 comic books that have the word “Avengers” in their titles. That’s just a rough estimate, but I think my numbers are pretty close. Which Avengers appear in which title is determined by a fantasy super-hero draft not unlike fantasy sports drafts. Which may not be true, but is, at least, a pretty convincing alternative fact.

Writer Mark Waid seems to have done pretty well with his draft for All-New, All-Different Avengers. The roster listed on the “what has gone before” page of issues #14 and #15 [$3.99 each and the finales of the title that began a year earlier] listed Captain America (Sam Wilson, the one who’s not a Nazi), Iron Man (who I think is in some kind of coma), Thor (the Jane Foster one), Vision, Spider-Man (the Miles Morales one), Ms. Marvel, Nova and the Wasp (the daughter of Hank Pym). Janey Van Dyne, the first Wasp also appears. The spiffy keen art is by Adam Kubert and Jeremy Whitley is credited as a co-writer of issue #14.

You’re probably think my head is about to explode. It’s not. These two issues are done-in-one character stories centering around Nadia Pym and Jane Foster. In issue #14, Nadia, one of the very smartest people in the Marvel Comics universe, tries to figure out how she can bring the two Civil War II sides to find a peaceful resolution. In issue #15, Jane Foster is trying to decide which side she should be on while dealing with her mortal self’s terminal cancer. Despite the grimness of the subject matter and the impossibility of truly happy endings, both issues are uplifting. Nadia and Jane are true heroes, something still in short supply in most super-hero comics from any publisher.

I liked both issues a lot and will be following the new Mark Waid-written Avengers title. Meanwhile, can anyone tell me which of the Avengers titles drafted It the Living Colossus?

Victor LaVelle’s Destroyer [Boom! Studios; $3.99 per issue] brings the Frankenstein Monster back to civilization in a six-issue series drawn by Dietrich Smith with colors by Joana Lafuente. We meet the Monster sitting on an iceberg and swimming with the whales, up to the moment when whalers slaughter said whales. The Monster exacts a brutal vengeance on the whalers and then hitches a ride with the animal rights activists who witnessed the carnage. Within a handful of pages, LaVelle hits the reader with the Monster’s grim reaction to “catching up” on the world via the Internet and follows that up with a violent surprise I didn’t see coming.

Destroyer had already hooked me. Then we got introduced to the last surviving member of the Frankenstein family and a genius scientist who lost her son and seeks to revive him. I’m two issues into this series and planning to stay right to the end. I expect the eventual meeting between the Monster and the scientist will be nothing short of stunning.

Destroyer is action, horror and social commentary. I recommend it to older readers. It’s well worth reading.

No conventions or travel for a bit, so I’ll be back next week with more reviews. See you then.