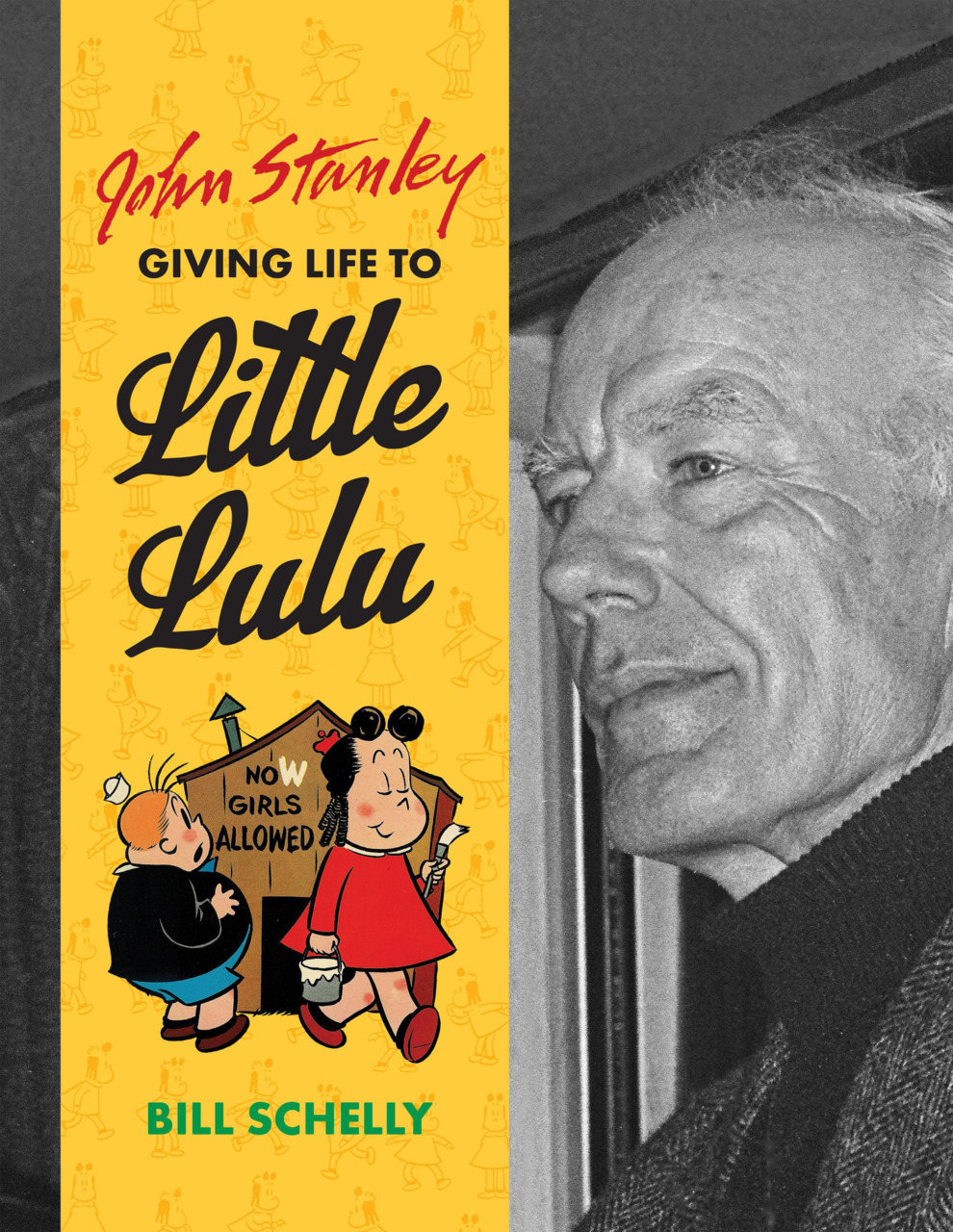 John Stanley: Giving Life To Little Lulu [Fantagraphics; $39.99] is Schelly’s latest landmark volume. Stanley was the writer and artist of the classic Little Lulu comics, the classic Nancy comics and so many others. He sometimes did the entire job on a comic book, both the writing and full art. He most often wrote what I call “drawn scripts,” scripts that were detailed or rough layouts with the copy included. Other artists would then do the final drawings.

Stanley came from a generation of comic-book geniuses who were not known to fandom at large. By the time comics fans began to research comics history, Stanley had retired from comics and was working as a silk screener. He attended but one comics convention in his life, though one of the convention’s other guests was the legendary Carl Barks of Donald Duck and Uncle Scrooge fame. Their joint panel is covered in this biography.

Writing a biography about a subject who has passed and with little source material is a daunting challenge. Schelly, of course, didn’t let that stop him. He did extensive interviews with Stanley’s son and surviving co-workers. He reached out to get every fact that was out there. The result is a book that celebrates Stanley’s work and reveals the artist’s struggles with alcoholism and depression. It shines a bright light on the man and his work. This book is simply a magnificent addition to comic-book history.

Because I was a super-hero kid growing up, it wasn’t until my early 20s that I discovered and quickly learned to appreciate giants like Barks and Stanley. Especially fascinating to me was the manner in which Stanley approached his stories. He basically started on page one without a clear idea of where the tales might go. I’m not quite that loose in my storytelling, but I plot loosely enough to allow for the magical surprises that sometime come to me while I’m doing the finished script.  Such moments are among the most joyful for me. I hope they were also for Stanley.

John Stanley: Giving Life To Little Lulu is a full-color book whose size – 10.4 x 13.4 inches – qualifies it as a deluxe coffee table book. The layout of the volume is breathtaking. The reprinted art pops off the pages. It is an indispensable addition to the library of any comics reader interested in comics history. The quality of the research, the writing and the production is why this fine book is my pick of the week. 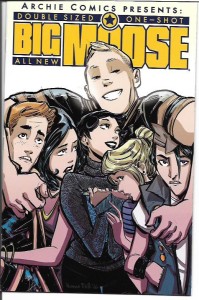 I’ve dropped the “new” Archie titles from my buying list, though I may continue to read them via the good graces of a friend who loans me his comic books. It’s not that the titles are necessarily bad – except for Betty and Veronica, which is pretty awful, and Afterlife with Archie, which is an abomination – but they have become more cheap soap opera than the nuanced comedy they were in the hands of writers like Frank Doyle, George Gladir and Craig Boldman.

The recent Big Moose One-Shot [$4.99] shows the good and the bad of “new” Archie. It featured three stories by three different writer-artist teams. I have no beef with the artists. Cory Smith, Thomas Pitilli and Ryan Jampole did terrific work with characters who were recognizable from story to story. But the writers – Sean Ryan, Ryan Cady and Gorf – didn’t seem to be writing the same lead character.

My favorite of the three was Cady’s “Have It All.” Moose struggles, but is determined to meet all his obligations. It’s a nice little tale of friendship, persistence and personal honor. This should be the model for future Moose stories.

Alas, “Moose vs. the Vending Machine” played Moose as being dumb as a pile of bricks, a characterization which should have been laid to rest decades ago. “The Big Difference” had a Moose who was a bully. A bully with redeeming qualities, but a bully nonetheless.

Someday, I’d like to try my hand at a contemporary teen humor comic book. Because I’m convinced you can combine the quality of a Doyle, a Gladir and a Boldman with stories that are funny and meaningful. I keep hoping Archie Comics manages that. 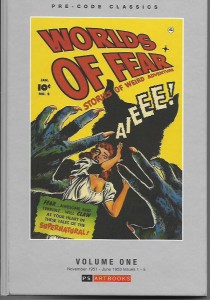 Good or bad, I never regret shelling out relatively big bucks for the PS Artbooks of Pre-Code Classics. In the case of Worlds of Fear Volume One [$59.99], it allowed me to read five horror comic books published by Fawcett Comics, best known as the Silver Age home of the original Captain Marvel. However, when it comes to recommending some of these hardcover volumes to you, I have to assume most of my readers do not share my mania for reading less-than-classic classic reprints. Which is what you get here.

Horror was not Fawcett’s forte. Though some legendary artists drew some of these stories, the dismal writing is usually more than the talents of Sheldon Moldoff, Bernard Baily, Bob Powell, George Evans and the like could overcome.

This first volume collects Worlds Beyond #1 and Worlds of Fear #2-5 from November 1951 through June 1953. Of the almost two dozen tales in this book, only two of them stood out. In both cases, there was the glimmer of a good story to be had if said tales had been better developed and written.

Worlds of Fear #4’s “The Dead Lover Returns!” tells of a young man who spots the woman he knows is his soul mate from across a great distance. He dies before he can meet her. He pleads his case before the guardians of the afterlife, saying he had never known true love in his life and wants a chance to experience it. They agree to send him back under challenging circumstances. The biggest catch is that if the woman falls in love with him, she will join him in death. This story would be worth a rewrite.

Issue #5 had “The Devil Puppet” with penciled art by Mike Sekowsky. A down-on-his-luck puppeteer carves a new puppet from the wood of a hanging tree. The new puppet brings him fame and fortune, but it quickly gains evil sentience. The plot isn’t remotely original, but the tale is told with considerable mania.

Pre-Code Classics World of Fear Volume One is for the completist. I’ll let you know if the second volume is better.

My next convention appearance will be at G-Fest, the big Godzilla convention held from July 14 to July 16 at the Crowne Plaza Chicago O’Hare. I’ll be doing a panel presentation each day. On Friday, we doing a panel on “Marvel Monsters.” On Saturday, I’ll be discussing Gorgo, Konga and Reptilicus in the movies, in the comics and in the odd novelizations of those 1960s films. On Sunday, the focus will be on “Syfy Monsters and Other Giant Critters.” The cheese will be celebrated at that last one.

That’s all for now. I’ll be back next week with more reviews and a few notes on a mysterious trip I’m taking at the end of this week. See you then.