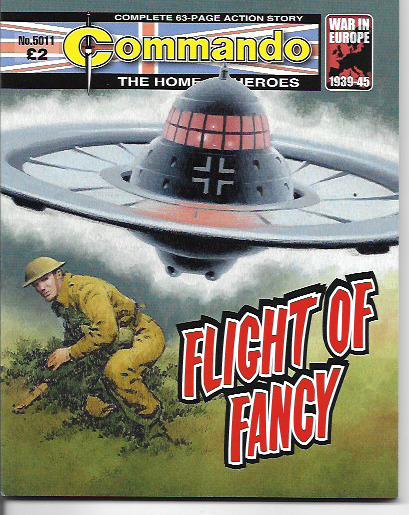 British comics have fascinated me since I bought several issues of Pow and Wham from Jerry “Father of Comics Fandom” Bails at a early 1970s Detroit Triple Fan Fair. Ironically, when I went to work for Marvel Comics in late 1972, my main job was putting together Mighty World of Marvel, Spider-Man Comics Weekly and the other British weeklies we produced in the United States, but which were printed and sold in the United Kingdom.

Currently, I buy 2000 AD and the Judge Dredd Megazine from my pals at Stormwatch Comics in New Jersey. I also have a subscription to The Beano, the kids humor weekly that has been around forever and a day. The Beano comes to me from Great Britain, usually two issues at a time. Recently, I added another legendary British comics title to my Vast Accumulation of Stuff.

Commando is a 68-page, black-and-white, digest-size comics weekly. Each issue features a complete 63-page, two-panels-per-page “action story.” Focusing mostly on stories from World War I and II, though other wars are sometimes featured, it was launched in 1961 and has continued ever since.

The current cover price of Commando is two pounds, which translates to around $2.50 in U.S. dollars. I receive the comic in packages of four issues. Based on what I’ve read so far, there are two brand-new stories per month and two reprinted stories.

Commando #5011 presented “Flight of Fancy,” a new story by George Low with art by Rezzonico and Vila. Set in World War II, the tale has a pulp adventure vibe to it in the form of a futuristic flying craft being tested by the Germans.

In issue #5012, “Launch the Wildcats” was a World War II air action story reprinted from 1968. The emotional core of the tale was the prejudice faced by a British pilot raised in Germany as a young boy and sent to England by his German relatives when things started to get bad. You know, that Hitler guy.

Issue #5013 has “The Hill,” a new Vietnam War story by Ferg Handley with art by Morahin. Four rookie American soldiers find themselves caught in the Tet Offensive. A palpable sense of doom infuses the tale.

The cover of issue #5014 has a “Special Forces 1939-1945″ blurb in its upper right corner. “Killer Commando” is a reprint from 1992. A skilled commando is profiting from his spy missions and willing to kill anyone who stands between him and that profit. His nemesis is civilian police detective Ernest Hallows.

Every one of these stories is a done-in-one tale. They all feature solid writing and art. If you enjoy straightforward war comics in classic styles, then I think you’ll enjoy Commando. You can check out the title’s subscription packages at:

Commando is my pick of the week. 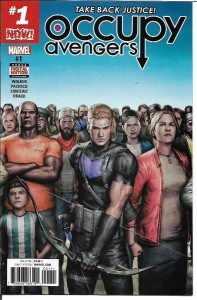 In a nation and a world where justice seems to be in increasingly short supply, Occupy Avengers [Marvel; $3.99 per issue] fits nicely in my progressive liberal wheelhouse. That the series is an ongoing redemption story makes me like it even more.

What you need to know is that, during Civil War II, Hawkeye killed Bruce Banner to prevent him from becoming the Hulk and slaughtering a whole bunch of civilians and heroes. Except that was not really justice. It was “predictive justice,” the fascist Captain Marvel’s code phrase for tossing out civil rights. That Banner had already asked Hawkeye to take him out if there was any possibility of his becoming the Hulk again doesn’t change the immorality of what the Captain Marvel faction was doing.

So now Hawkeye is traveling the country trying to find redemption after being cleared of murder in the courts. In the six issues of this title that I’ve read, he’s faced “businessmen” contaminating the water supply of a New Mexico reservation while stealing clean water from the tribe. He’s stumbled across a plot to create life-model decoys. He’s defended the ultimate outsiders: Skrull/human hybrids just trying to live peaceful lives. He’s teamed up with Red Wolf and Tilda Johnson, the first a time-displaced lawman and the second a former super-villain. Okay, maybe the group’s claim to the Avengers name is shaky, but we could use more heroes who speak truth to power while shooting arrows at said power. 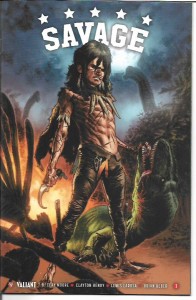 The Valiant Universe gets larger all the time. Though things like alternate realities, supernatural dimensions and time travel aren’t among my favorite story subjects, Valiant publishes quality comics that, through a combination of “what has gone before” prose and the acumen of its writers, are new reader-friendly and relatively easy to follow. The company roster contains three of my favorite ongoing comics series: Faith, Bloodshot and Archer & Armstrong.

Savage [$3.99 per issue] doesn’t seem to connect to the rest of the Valiant Universe, but I might have missed some clues along the way. Here’s the Amazon blurb for the series:

Fifteen years ago, the world’s most famous soccer star, his former supermodel wife and their infant son disappeared without a trace. The world believes they are dead. But, in reality, their private jet crashed on a mysterious, unknown island ruled by prehistoric creatures from another time. This is the story of how they lost their humanity.

The four-issue series follows the fearful journey of that family. The island has dinosaurs that want to eat you and vicious men who want to kill you. Written by B. Clay Moore with art by Clayton Henry and Lewis Larosa and colors by Brian Reber, it’s an exciting and violent tale that has some truly shocking moments and ends on a cliffhanger I saw coming but was no less effective for it. I’m being vague here because I want you to go out and read this series for yourself. I recommend the trade paperback of the series which was released in April. At $9.99, it’s actually less expensive than the original comic books.

I’ll be back next week with more reviews and some information on my next convention appearance. See you then.