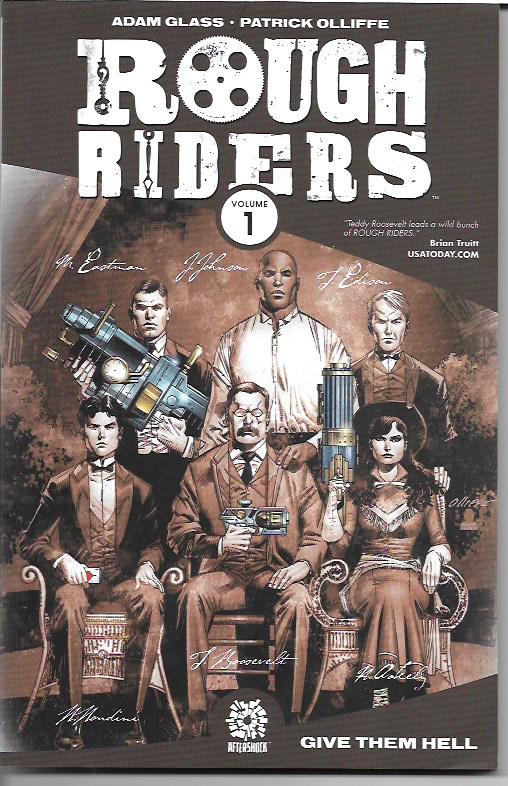 Summer’s here. I’ll be staying home for most of June and July, save for my annual journey to G-Fest, the wonderful Godzilla convention held in Rosemont, Illinois. Otherwise, I’ll be writing comic books and columns and books and introductions to books. I’ll be putting on my famous Vast Accumulation of Stuff garage sales in the perhaps hopeless quest to reduce my accumulation to the point where I can call it a collection without sobbing. I’ll be celebrating 33 years of marriage to my Sainted Wife Barb and our son Eddie’s 29 years on this planet. We’ll have our traditional July 3 cookout at our home and watch the fireworks from the nearby high school from our front lawn. And, of course, I will be reading lots of comic books in all their myriad, wondrous forms.

Among the comic books I’m currently loving, Rough Riders Volume 1: Give Them Hell by creator and writer Adam Glass and artist Patrick Olliffe [AfterShock; $19.99] ranks high enough to be my pick of the week. It delivers a solidly entertaining and exciting tale of 19th Century heroes fighting a shadow war unknown to history.

Teddy Roosevelt is the Nick Fury/Tony Stark of these turn-of-the-century avengers. Tortured by things he’s seen, Roosevelt gathers a team of unlikely heroes to battle against the mysterious forces posed to conquer our world. The roster: boxer Jack Johnson, Coney Island magician Harry Houdini, sharpshooter Annie Oakley, inventor Thomas Edison. Glass and Olliffe even include a super-villain in the still-not-dead Rasputin.

Glass doesn’t shy away from the imperfections of his heroes or the prejudice of the times. Johnson and Houdini, as a black man and a Jew, face the racism common to the times. Oakley is an alcoholic. Edison’s alleged penchant for claiming credit for the discoveries of others is shown in this graphic novel. Roosevelt struggles with the necessity of working with privileged and wealthy businessmen he despises. As the story unfolds, he and his team will face down some of their demons and show surprising emotions and strengths.

Olliffe’s solid storytelling and artistic acumen is indispensable. His action scenes flash across the pages. His human scenes bring us closer to the characters. Colorist Gabe Eltaeb does an outstanding job bringing depth to the art. Letterer Sal Cipriano continues to be one of those letterers who is so good the reader doesn’t realize how good he is.

Rough Riders Volume 1 collects the first seven issues of the title. I hope we’ll be seeing more of this series and more of its unlikely heroes. I recommend it for readers of all ages. 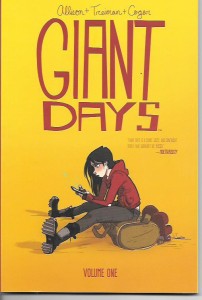 One of the best things about modern comics is how many comic books and graphic novels now have women characters as their leads and, in many cases, created by women. I enjoy a great many of these comics. However, as with my beloved super-hero comics, the mere presence of women leads or creators doesn’t translate to a terrific comic book.

Recently, Marv Wolfman, he of Tomb of Dracula, Teen Titans, and so many other credits there could be a Marv Wolfman Museum, remarked how much he liked the Wonder Woman movie and how much he disliked that so many reviewers said something along the lines of “It’s done better than expected for a film directed by (or starring) a woman.”

Marv continued: “Movies, like books, paintings, comics, music and a thousand other things I can’t think of right now, is an art form. And art is gender neutral. Art isn’t better or worse because it was done by a man or woman.”

They also share one another’s journeys through a morass of modern life that includes experimentation and growth, chauvinism, illness, academic terrors, romantic relationships, mysteries, old foes and a little weirdness from time to time. There are many comic books and webcomics that attempt to explore much the same ground and with similar characters. Few of them equal Giant Days.

Allison’s dialogue “sounds” real to me, which makes his characters real and relatable. Treiman and Saris draw expressive figures and faces while grounding the characters in reality. Cougar’s colors further enliven the world of Giant Days. Jim Campbell’s lettering is easy to read and never distracting. To me, all of that is what makes great comics. Everything is in service to the characters and to the story. No showboating here.

I’ve read the first two volumes of Giant Days. Two more have been published with a fifth due this month. So, when I’m finished with this review, I’m going to order the ones I don’t own yet. Consider that my way of recommending them to all of you.

Sugar & Spike: Metahuman Investigations by Keith Giffen, Bilquis Everly and Ivan Plascencia [DC; $14.99] was fun, albeit not quite as much fun as I would have liked. Back in the day, the legendary Sheldon Mayer created a comic book about two babies who had their own language and tried to figure out the grown-up world. Those are some of the best comic books of all time and they really need to be collected in their entirety. But I digress.

Giffen turned the toddlers into 20-something private investigators doing the usual often-sordid private investigator stuff. Until they stumble into a niche market: keeping past indiscretions of super-heroes out of the headlines. Relax. Those past indiscretions don’t have anything to do with Russian prostitutes, making secret deals with Russia, taking money from kids with cancer or the like. They all come from long-ago adventures long since forgotten by today’s comics publishers, editors, writers and readers.

Batman’s more bizarre costumes have gone missing. Superman needs to retrieve the kryptonite he buried on an island he made that looks like him. Wonder Woman almost married a monster who now wants her back. Green Lantern fears the body of his former alien pal Itty is a museum exhibit. The Legion of Super-Heroes wants a dangerous machine, so much that several configurations of Legion time-travel to the same time and place.

What keeps this book from being as much fun as I would like is that Sugar is incredibly unpleasant and Spike allows her to treat with extreme disrespect. Sugar was always the alpha baby in those great old Mayer stories, but this is just unsettling.

If you’re willing to ignore that most of the past adventures that play roles in these stories could not possibly all be part of the same continuity – and I’m quite willing to do that – you’ll get a kick out of this volume. I recommend it for old-time DC fans with a keenly developed sense of the absurd.

Enjoy your summer, my friends. I will be back next week with more stuff.