Recent Marvel Comics “epics” have been taking it on the chin around here of late. While it’s deserved – Civil War II was particularly despicable and wrongheaded – I wouldn’t want you to think that I’m down on Marvel. The company still publishers some great super-hero comics. Like the ones I’m writing about this week.

Ms. Marvel is the super-hero the United States of America needs as Captain Marvel goes fascist and Captain America hails Hydra. Writer G. Willow Wilson has made teenage Kamala Khan incredibly admirable and very real. Kamala has doubts from time to time and makes some mistakes, but her heart is good and her mind is sharp. In this era of failed and even criminal leadership, it’s nice to have a hero we can count on to do the moral thing. It’s no crime to stumble. It is a shame when someone with great power allows that stumble to remain in place.

I have Ms. Marvel #9-17 [$3.99] before me as I write this column. All are written by Wilson with art by Takeshi Miyazawa and Adrian Alphona. The first three issues are Civil War II tie-ins. Caution. For me to express my admiration of this title, I will occasionally have to include SPOILERS in my comments.

If you were lucky enough to miss Civil War II entirely, what went down is that a new Inhuman seemingly had the power to predict the future with certainty. Powerful government forces acted on what he predicted as if it were fact, arresting people who hadn’t committed crimes and without any evidence that they were planning to commit crimes. Captain Marvel, who later admitted that she would violate civil rights if there were only a 10% chance of those predictions being accurate, was the poster child for the government. Kamala, an admirer of Captain Marvel, agreed to work with her.

Kamala’s admiration and compliance soon gave way to doubt and then rejection of this super-powered assault on civil rights. She quit and faced the consequences of her initial bad decision. In another fine Marvel super-hero title – Champions – she joined with several other young heroes to find a better, kinder and more productive way to function as super-beings in a troubled world. I wish and hope and believe it will be children like her who lead our nation out of its current darkness.

Obviously, Ms. Marvel pushes my progressive liberal buttons in good ways. I was greatly impressed by a recent storyline that revolved around online bullying. But Ms. Marvel is more than its political and social stands. It is an entertaining and exciting super-hero title in the traditional and well-tested Marvel manner. Kamala has great power, great responsibility and all of the stuff we and our children deal with in the real world.

From where I stand, a truly great super-hero comic is one in which the real world stuff is portrayed with enough reality to make the fantastic stuff believable. It has relatable characters who live in my world, albeit a super-powered version of my world. It has heroes who truly aspire to be heroes.

Ms. Marvel clicks all my boxes. It’s my favorite Marvel super-hero comic and my pick of the week. 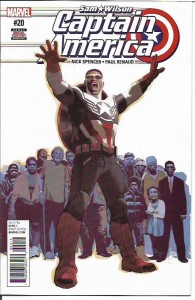 I’m not a fan of Nick Spencer’s writing. I’ve been critical, to put it mildly, of his tedious Captain Hydra storyline in which Steve Rogers, a Roosevelt Democrat and the creation of two of comicdom’s greatest Jewish comics creators, is revealed to be a Nazi. There’s a Cosmic Cube involved, so I’m sure it’ll be undone in unsatisfying fashion, but, in the meantime, we’ve seen a year’s worth of Captain America being a murderous Nazi. It’s garbage.

That said, you’ll be surprised to learn I think Spencer’s writing on Captain America: Sam Wilson has been excellent. To catch up the readers who haven’t followed the series…

Steve Rogers got old. He gave his shield and title to Sam Wilson. There were those who objected to this because, well, because they were racists. When Steve got young again, he said Sam should keep the shield and the title. People objected because, well, because they were racists. This should come as no surprise to those of us who have seen the resurgence of white supremacists in our country and, indeed, in the highest circles of our government.

Sidebar. When I say “people,” I mean people in the story, not fans who object to Sam becoming Captain America because it’s not exactly the way Captain America was when they were twelve. While I do tend to dismiss such moaning, I don’t assume that every fan of this type is a racist. They are, as so many fans are, resistant to change in their favorite characters and comics. Fortunately for them, there are decades of Captain America comic books they can enjoy. We live in a comics age of plenty.

What draws me to Captain America: Sam Wilson is that Spencer tells powerful stories about race and that is an important thing to do in our world. Yes, Captain Hydra is behind some of the awful things we see in these comic books, but the stories would work just as well and be just as powerful without the Captain Hydra nonsense. Again, look at what’s happening in our country right now.

Captain America: Sam Wilson #21 [$3.99], the most recent issue I’ve read, has Sam renouncing the Captain America shield and title. He seems to be resuming his identity as the Falcon and this seems to be the final issue of the title. Though I don’t keep up on comics news as I once did – kind of busy trying to make it at the moment – I hope this means we’re getting a new Falcon title and that it’ll continue to address important issues. 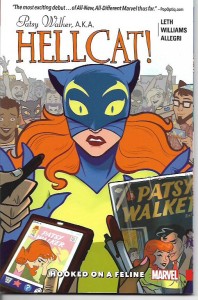 Patsy Walker, a.k.a. Hellcat has a most convoluted history. She was the subject of embarrassing teen humor/romance comics created by her mother.

She married her high-school sweetheart who became an abusive monster. She hung out with Hank “the Beast” McCoy, donned a super-hero suit previously worn by the Cat, became a super-hero, became kind of an Avenger, joined the Defenders, married the Son of Satan, died and went to Hell, came back from the dead and…ow! My brain hurts!

You would think writer Kate Leth might have simplified or ignored some of the above for Patsy Walker, a.k.a. Hellcat, the brilliant sixteen-issue series she did with artists Brittney L. Williams and Natasha Allegri. You would be thinking wrong. Leth used all of it. She made it fit together smoothly while adding such great concepts as an employment agency for super-powered people who do not want to become super-heroes or super-villains. They just want to use their powers to earn an honest living doing non-super-hero and non-super-villain things.

Leth combined action, human drama, humor and even a bit of tragedy into her stories. The art didn’t look like anything you’d expect to see in a Marvel super-hero comic, but it was so just right for this Marvel super-hero comic. After borrowing the individual issues from a friend, I went out and bought the trade paperbacks. Because these comic books are keepers. I’m keeping them around so that I can read them again and because I think I might learn a new trick or two from them.