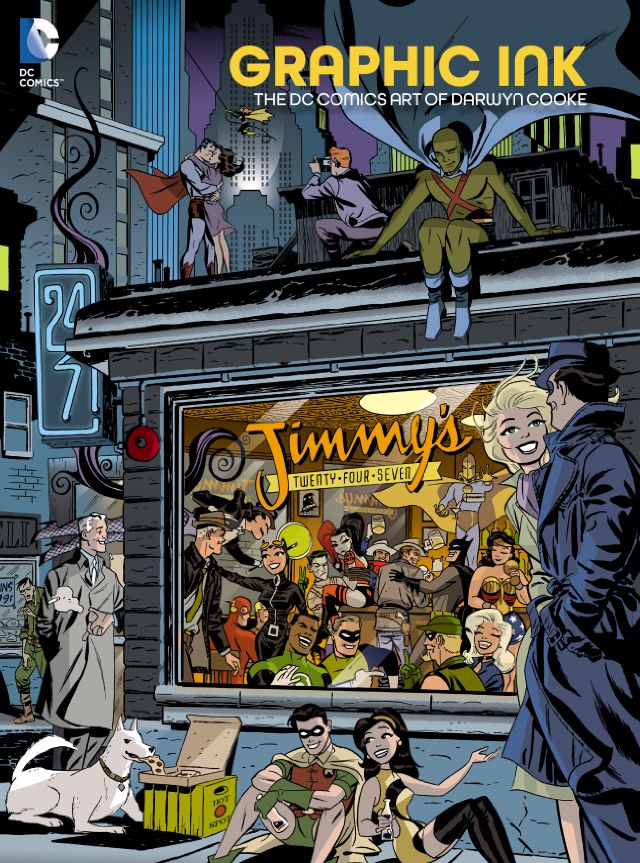 My top pick this time around is Graphic Ink: The DC Comics Art of Darwyn Cooke [$39.99], a gorgeous and hefty hardcover volume that showcases the work of one of the most amazing comics creator of our times. Cooke is an Eisner Award-winning cartoonist also known for his work in animation. Whether I’m enjoying one of Cooke’s instant classic covers or reading one of his comics stories, I never fail to be impressed by his economy of line and word and the incredible detail of his work. Yes, I know that sounds like a contradiction. It’s one more reason I find Cooke’s work so amazing.

Cooke packs a world of wonderment into this book’s 400 pages. The tome kicks off with a one-page introduction of teeny-tiny type that required the use of a magnifying glass by this old man, then opened the visual show with “The Private Eye,” a sample Cooke did for DC Comics back in the day and which ran in the fondly remembered New Talent Showcase in 1985.

Sidebar. New Talent Showcase is one of those fun titles for comics fans to collect. It features early work by a number of artists who went on to become stars. A trade paperback collection or two would be an excellent idea. End sidebar.

From 1985, the book moves into 2000 and stories from a variety of titles and genres. Represented are tales from Superman Adventures, Batman: Gotham Knights, Looney Tunes, American Splendor, Jonah Hex and more. Written by Justin Grey and Jimmy Palmiotti, the Hex tale “The Final Curtain” is one of my all-time favorite stories of the legendary gunfighter.

We get excerpts from Cooke’s own The New Frontier, a series which revisited the Silver Age of DC Comics. That series so impresses me that one of my 2016 bucket list items reads: Re-read Darwyn Cooke’s The New Frontier. Try to write an equally economical and powerful script.

And, of course, there are the covers. Iconic snapshots of classic DC Comics characters. Almost every one suitable for framing. Would that I hd enough walls for such a worthy purpose.

Graphic Ink: The DC Comics Art of Darwyn Cooke is a book I cannot imagine not owning. It belongs in the personal libraries of comics art afficinados and avid DC Comics fans, and also in every public and school library around the world. It’s a book as classic as the material it contains. It earns my highest recommendation. 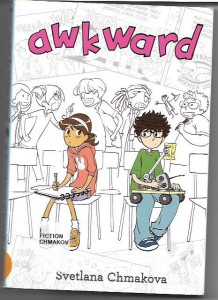 A new year is always accompanied by more “best of” lists than I can read. Of late, I’ve been paying the most attention to lists of the best comics and graphic novels for general and younger audiences. Svetlana Chmakova’s Awkward [Yen Press; $11] has been turning up on many and maybe most of those lists.

Awkward starts out in familiar territory. Peppi Torres is nervous about her first day in a new school, desperately wanting to avoid doing anything embarrassing. So she starts her day by tripping and scattering her books everywhere. When shy nerd Jaime Thompson tries to help her, the school bullies call her “nerder girlfriend.” She freaks and pushes Jaime away, hurting the feelings of the nice kid.

Awkward gets interesting when it turns into kind of sort of Romeo and Juliet. Cartoonist Peppi joins the Art Club. Jaime is a member of the Science Club. The two clubs are arch-rivals, competing for a spot at the school fair. From there on, the graphic novel kicks into high gear with sometimes frantic events and interactions that lead to some surprising places. By the time I finished the book, I could readily understand why it’s appearing on all those “best of” lists. It belongs there.

Awkward is a 224-page trade paperback aimed at young readers aged 10 to 13 and, although Yen Press doesn’t make this claim, readers old enough to be their grandfathers. Hey, I’m just looking in the mirror here. The book includes a design gallery and several pages on Chmakova’s drawing process. I love the graphic novel and I love the package. Buy it for the young comics readers in your life and read it yourself before you give it to them. 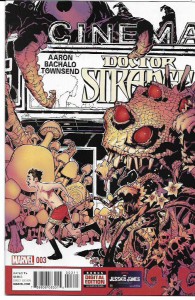 Three issues in and I’m loving the post-Secret Wars Doctor Strange [Marvel; $3.99 per issue] by writer Jason Aaron, penciler/colorist Chris Bachalo and inkers Tim Townsend, Al Vey and Mark Irwin. The new series kicked off with a spiffy summation of Strange’s life and magical exploits in just a few pages. Then we were launched right into an adventure with what may be the most relatable master of the mystic arts ever. I like this Stephen Strange. I really like him. By page ten of the first issue, I was hooked.

It was like this. Doc was doing battle with an other-dimensional sorceress who was into him. He was facing the enormous Spurrgog the Hell-Breather. After carrying the day, Strange noted that this had been a normal Tuesday for him. What’s not to love?

Strange protects mankind for the mystic dangers all around us, yet invisible to our eyes. There’s a bar with no door where the Marvel mystics hang out. There are weird creatures and situations. There’s the delightful Zelma Stanton of the Bronx who comes to Strange for help and stays on to sort his messy library. Again, I ask…what’s not to love?

With clever writing and fantastic art, Doctor Strange is one of a number of new Marvel titles that make me think maybe, just maybe, the [CENSORED] Secret Wars and the equally [CENSORED] build-up to it was worth all the grief.