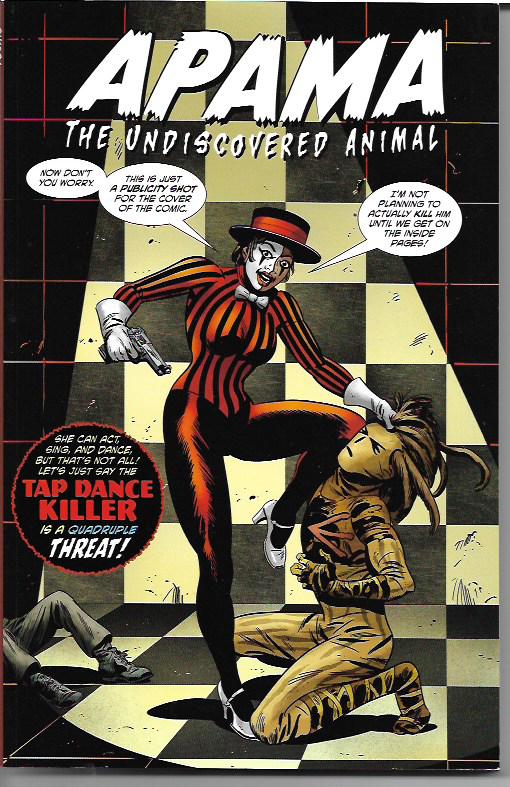 From the heart of Cleveland, Apama The Undiscovered Animal Volume 2 [Hero Tomorrow Comics; $19.99] is a hometown favorite and my pick of the week. The 184-page, full-color softcover collects issues #6-11 of the title by writers Ted Sikora and Milo Miller with artist Benito Gallego. The book is loaded with extras, starting with an introduction by legendary comic-book writer and editor Roy Thomas. As my friend and mentor says, Apama is the kind of comic book that makes you remember you’re a comic-book fan.

Apama grew from a wonderfully quirky independent movie called Hero Tomorrow. In that 2007 film, a struggling comics creator tries to keep his dreams alive by designing and becoming a super-hero with the powers of an animal unknown to the modern world. Consider that the short version recommendation that you see this movie. There is much more to it than I have space to relate to you here.

In this series, ice cream truck driver Ilyia has truly become Apama with mixed results. He’s helped people, but he’s also inadvertently hurt people. He’s brought villains to justice, but he’s failed to protect some of their innocent victims. He is confused about both of his lives. If this sounds like a super-hero of the 1970s, well, it has that special vibe. Sikora and Miller would not have been out of place among the Marvel writers of that decade. Coming from me, that’s high praise.

Artist Gallego has more than a little John Buscema in his work. The Spanish artist is a terrific storyteller whose action scenes move with crackling energy and whose human moments feel real. With the pun fully intended, I marvel at how good he is.

The stories are as delicious strange as their hero. A criminal who does dirty work for corporations becomes a corrosive super-villain. A riot breaks when a failing baseball team holds a “Ten-Cent Beer Night” in a crazy tale based on an actual event in Cleveland sports history. Against their will, stage performers become deadly super-villains. It’s a wild ride from start to finish.

Backing up the comics stories are all those extras I mentioned at the top of this review. There are background comics and histories that trace the secret origins of some of the concepts seen in the new Apama stories. There are guest pinup galleries featuring Apama, his mystical foe Regina and the Tap Dance Killer.

Apama the Undiscovered Animal earns my highest recommendation. It’s a great comics series that should appeal to old-time fans like me, and also to modern readers. Discover Apama today because everyone will be talking about him tomorrow. 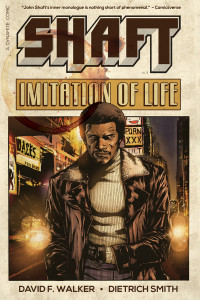 From Dynamite Entertainment, Shaft: Imitation of Life by David F. Walker with artist Dietrich Smith [$15.99] is the follow-up series to Shaft: A Complicated Man, which was named “Story of the Year” in the 2015 Glyph Comics Award.

Shaft is an African-American private investigator who was created by novelist and screenwriter Ernest Tidyman. Shaft appeared in five novels, four movies and a TV series. Tidyman, just to do a bit more hometown bragging, was born in Cleveland.

In this new comics story, Shaft is doing pretty well following his role in a high profile case. Too well for his liking. He tries to avoid the jobs that will inevitably go off the rails, but his sense of honor and justice, much as he tries to deny him, lead him into very dangerous territory. Before long, Shaft finds himself mixed up with sadistic mobsters, idiot filmmakers, murderous pornographers and more. Such is the life of the cat who won’t cop out.

Walker and Smith present an action-packed story that takes readers into some pretty dark places. Yet from the darkness, Shaft emerges as a fundamentally decent man who’s much more of a hero that he’ll admit to. I’m a big fan of this character.

This collection is rated “M” for mature readers. I’d include older teens in that because their world is more dangerous that we parents like to admit. It’s definitely recommended to fans who like their heroes hard-boiled. 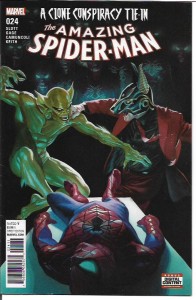 Over the weekend, I read The Amazing Spider-Man #15-26 [with cover prices ranging from $3.99 to $9.99]. Judging from the publication information in the indicia, these twelve issues came out within a span of ten months. The writers were Dan Slott and Christos Gage, and I generally enjoy their work. The main artist for these issues seems to have been Giuseppi Camuncoli with penciler Stuart Immonen and inker Wade von Grawbadger coming on with #25. The art on these issues is constantly good. So why didn’t I enjoy them?

Issue #15 has Mary Jane becoming the new Iron Spider, essentially an Iron Man suit in spider-drag. Then we get a bunch of issues with a “Before Dead No More” topper, followed by more issues labeled “A Clone Conspiracy Tie-In,” and then the Green Goblin returns. Been there, done that, the whole group of issues could have been called “Beating Dead Horses” in my mind.

As with the Green Lanterns over at DC, I think there are too many Spider-heroes at Marvel. I have hated “clone technology” since it first raised its derivative ugly head. The Green Goblin is another one of those super-villains that bores me because he keeps coming back again and again with nary a new twist. Been there, done that. Want something new.

Adding to my dislike of these issues, apparently, you need to have read The Clone Conspiracy series to fully understand what was going on in these Spider-Man issues. Having not read that series, I had the sense that the Spider-Man issues were missing key scenes…and wondering if the murky motivations of the main villain somehow made sense if you read the Clone Conspiracy series. My gut feeling: if a reader pays four bucks and up for a comic book, the reader should not have to buy other comic books to get the full story.

I have found much of Slott’s Spider-Man work interesting. But this run just didn’t do it for me. It happens.

Lest you think I’m down on Marvel, I’ll be back here next week with a column dedicated to Marvel titles I really love or, at the least, find intriguing enough to enjoy them.