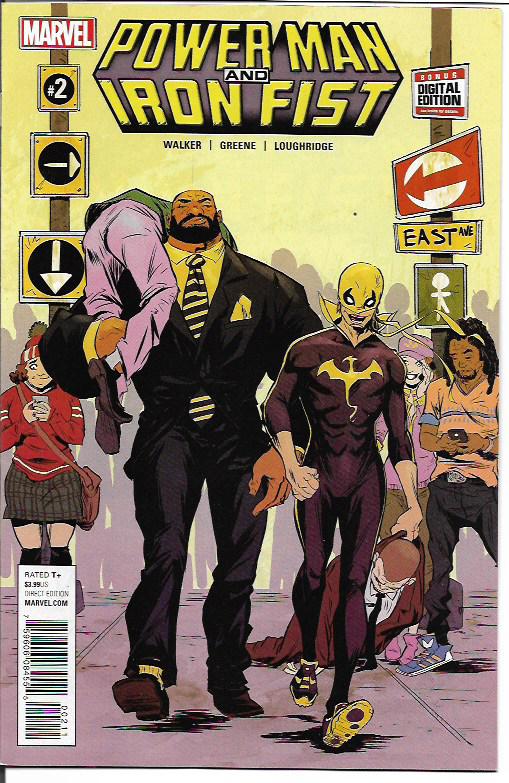 Walker combines the street-style of Luke Cage with the mysticism of Danny Rand in this series. The two heroes and their friendship are well used with their back-and-forth conversations being very funny at times…and serious when it’s called for. There are nice moments with Luke and his family – at least until some other writer in some other book split up Luke and Jessica – and reflective moments when the heroes, especially Danny, question their choices and place in this world. I’m a guy who likes to see the real world reflected in the super-hero comics he reads. Walker brings that realism to the fantastic Marvel Universe in fine fashion.

Sidebar. I haven’t read all of Civil War II yet, mostly because I am bone-weary of these mammoth and ultimately useless major events. I’m guessing whatever went down between Luke and Jessica went down there. Or maybe it was in the new Jessica Jones series, which I’ve read but which seems to take place after the split. The new Jessica series has the disadvantage of being tied to yet another, oh, I’ll just say it, manifestly dumb event. The bottom line is that I liked Jessica in Power Man and Iron Fist a heck of a lot more than in her own new series. May the Universe protect us from creators who think the way to write super-hero comic books is to dump on those heroes unrelentingly. End of sidebar.

Walker brings back a great many characters from Luke and Danny’s pasts with great takes on those characters and the Harlem in which they operate. Luke and Danny mostly stay on the side of the angels, but there’s a considerable grey area in which yesterday’s foe might become today’s ally. That the issues to date have offered terrific redemption stories clicks another of my boxes. This is really smart writing that draws readers into the world of Heroes for Hire.

Did I mention my heart beat just a tad faster when Heroes for Hire reopened for business? I love the concept.

Several artists were involved in the issues I read. Sanford Greene is my clear favorite, but Flaviano, Elmo Bondoc and Scott Hepburn all did fine work as well.

Getting back to Civil War II for a moment, that sad event has too many heroes – heroes – deciding that it’s perfectly okay to arrest, sentence and imprison people for crimes that they haven’t committed yet on account of some psychic Inhuman says they’re going to commit those crimes. If I’m a super-hero or even just a typical American citizen who actually understands what our country is supposed to be about, my immediate response is:

“Are you kidding? That’s not just a massive civil rights violation, it’s immoral on every level. What’s next? We start taking missions from Alex Jones?”

There were about a thousand tie-ins to Civil War II. Walker had one of the best takes on it. He has Luke Cage game the system to trick the fascist super-heroes into doing what he wants them to do. Gee, how come the psychic didn’t see that coming?

Power Man and Iron Fist Vol. 1: The Boys are Back in Town 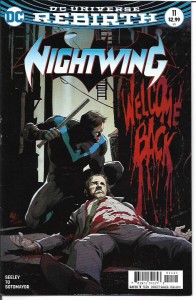 I also binge-read DC’s Nightwing #11-17 [$2.99 per issue]. Before and after Rebirth, this has been a so-so title for me. That said, the recent storyline involving Dick Grayson returning to Bludhaven, meeting and working with some reformed villains, starting a brand-new and interesting romance, and running afoul of a Bludhaven cop who doesn’t think highly of costumed heroes was entertaining. I’m a sucker for bizarre groupings of heroes and villains, even when, as with this story, I didn’t know who most of them were. It could be I never read the comics they appeared in previously, it could be those comics were utterly forgettable. That doesn’t matter to me as long as I can follow the story – which I could – and if the story has a satisfying conclusion – which it did. So kudos to writer Tim Seeley and artist Marcus To on this serial.

Unfortunately, the issues following that story bring back another of the grotesque villains that have dominated the Batman titles for too long. There’s a sameness to these villains with their bizarre motivations and their inclinations toward disfigurement and other tortures. Psychopath after psychopath works better in a TV series like Criminal Minds than in a comic book. Mostly because, save for rare cases, TV series don’t bring back their psychopaths in issue after issue. I’m a huge fan of Dick Tracy creator Chester Gould’s willingness to polish off even a great villain to make room for the next one.

I like Nightwing well enough to continue reading it. But I’d like it to be more than Batman Lite. 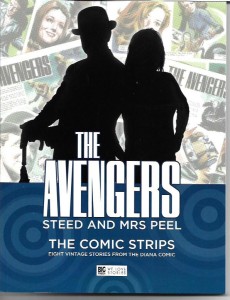 One more item for this week and it’s a pip. The Avengers Steed and Mrs. Peel: The Comic Strips [Big Finish; $16.67 or thereabouts] is a collection of the eight, gorgeous fully-painted stories that ran in D.C. Thompson’s Diana magazine in 1967. The strips, drawn by Emilo Frejo with assistance from Juan Gonzales, ran two pages per week from issues #199 to #224. These stories have also been adapted by Big Finish for its series of Avengers audio adventures.

I ordered this book for its novelty value and because Mrs. Peel was a boyhood crush of mine. I was pleasantly surprised to find these stories were clever and not at all beyond the scope of the Avengers TV episodes I loved. Steed and Peel were in character, albeit not quite as flirty as in the TV series. The art, as mentioned above, is gorgeous. The more I learn about these British comics weeklies, the more I wish I were writing for such magazines today.

I enjoyed this collection tremendous. It also features informative articles on the making of the audio adventures. It’s a fascinating volume and the only downside is that it has me wanting to buy the audio adventures as well, and watch all the Steed and Peel episodes again, and start searching out the various paperback adventures of the team, and…oh, blimey, I’ve got it bad.