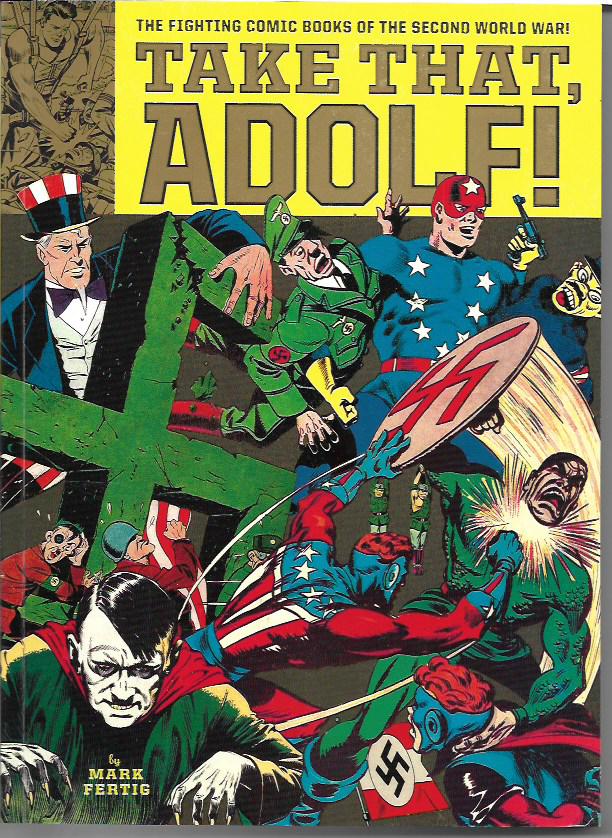 If, like me, you approve of punching Nazis, then Mark Fertig’s Take That, Adolf! The Fighting Comic Books of the Second World War! [Fantagraphics Books; $29.99] is the coffee table book of both your dreams and nightmares. The handsome softcover book provides insight into the role comic-book heroes of the 1940s played when Hitler and his Axis cohorts threatened the world. This colorful 252-page tome includes more than 500 covers from that era, covers drawn by comic-book legends like Jack Kirby, Alex Schomburg, Bill Everett, Charles Biro, Jack Burnley, Reed Crandall and others.

Fertig’s text can be a little too dry at times, but it does a good job explaining the times that brought these garish covers to life. The covers are the real attraction of this book. They are exciting and horrifying, both for the brutal violence they depict and the clear racism that will startle and upset readers with more modern, evolved sensibilities. I would never suggest censoring these images – there’s that whole bit about what happens when you forget history – but I don’t think I’ll ever get used to see the word “Jap” on the cover of a Superman comic book, even one from the 1940s.

The cover of Red Dragon Comics #7 [Street and Smith; July 1943] was the one that stopped me in my tracks. Drawn by an unknown artist, it shows the hero blasting the flesh off the bones of a Japanese officer and exposing the officer’s shattering spine. Adding to the impact, the officer isn’t drawn as the usual cruel and dehumanizing caricature with which the Japanese were usually depicted. He looks human and it makes the violence all the more shocking.

Many of the covers have little or nothing to do with the interiors of these comic books. Heroes like Batman and Superman are fighting alongside American soldiers or bringing them supplies, which they almost never did in their actual stories. Heroes raised money for the war effort with covers often including reproductions of bonds and stamps.

It wasn’t just costumed heroes who supported the soldiers on their covers. Five different covers from July 1945 show the same letter urging readers to buy War Bonds. Bugs Bunny holds the letter on the cover of Looney Tunes and Merrie Melodies Comics #45. Andy Panda and Charlie Chicken post the letter on New Funnies #101. The cover of Popular Comics #113 has the letter being held by Smilin’ Jack, Pat Ryan and Connie from Terry and the Pirates, and Smokey Stover. Head shots of the stars of Super Comics #86 – Dick Tracy, Smitty, Winnie Winkle, Moon Mullins, Harold Teen, Tiny Tim – float around the letter on that cover. On the cover of Walt Disney’s Comics and Stories #58, Mickey Mouse, Donald Duck and Dopey react the Spirit of ‘76 image with the letter turned into a flag.

The comics industry reached out to its readers with covers showing humor and heroism, horror and determination. Fertig’s collection of these images is a terrific way to capture the times that inspired those covers. I recommend this book highly while cautioning readers that some images might be too alarming for youngsters.

Take That, Adolf is my pick of the week. Get a copy for yourself, then recommend it to your local public and school libraries. 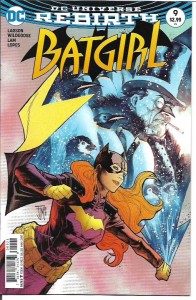 I’m reading my way through more of DC’s “Rebirth” titles. Some of them delight me and others leave me cold. My interest in all things Green Lantern has been on a downward slide since those titles went “all the colors of the wind” on us. The Justice League books aren’t doing it for me. This doesn’t mean they are bad comic books, just that they aren’t doing it for this reader.

Batgirl and Batgirl and the Birds of Prey are titles I enjoy, but which aren’t among my favorite DC titles. As much as I like Barbara Gordon in these titles, she still strikes me as too young to have lived all the history that still follows her even after “Rebirth.” Even so, there are things I like very much in these books.

“The Son of the Penguin” story arc that began in Batgirl #7 [$2.99] captured my interest. I’ve read through issue #9 and look forward to learning more about Ethan Cobblepot and whatever relationship he has with his father.

In Batgirl and the Birds of Prey, I’m pleased by the portrayal of the Huntress, a great character who has performed poorly in recent years. She was particularly misused in the ill-conceived Grayson. I disliked that series so much that I get a twinge whenever it gets mentioned, even in passing, in this title.

Both titles have solid writing – Hope Larson in Batgirl; Julie and Shawna Benson in Batgirl and the Birds of Prey – and decent art and storytelling. The stories of the supporting characters add weight to the super-hero stuff. I’m not handing out any awards to either title, but both are entertaining. That’s enough for me to continue reading them and to recommend them to you. 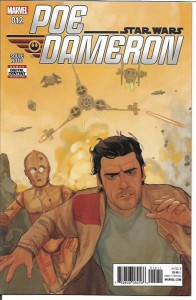 Marvel’s Poe Dameron [$3.99 per issue] is yet another entertaining book. Written by Charles Soule with art by Phil Noto, it’s a Star Wars spin-off that stars the Resistance X-wing pilot introduced in Star Wars: The Force Awakens [2015]. The title is set immediately before that movie.

I’ve read Poe Dameron #1-12, which features exciting clashes with the First Order and the New Republic. Poe’s supporting cast – droid BB-8 and his Black Squadron of fellow fighter pilots – expand the adventures in good ways. Poe even has his own arch-nemesis in the form of Terex, a former officer of the First Order Security Bureau who has his own agenda going on. This is fun stuff.