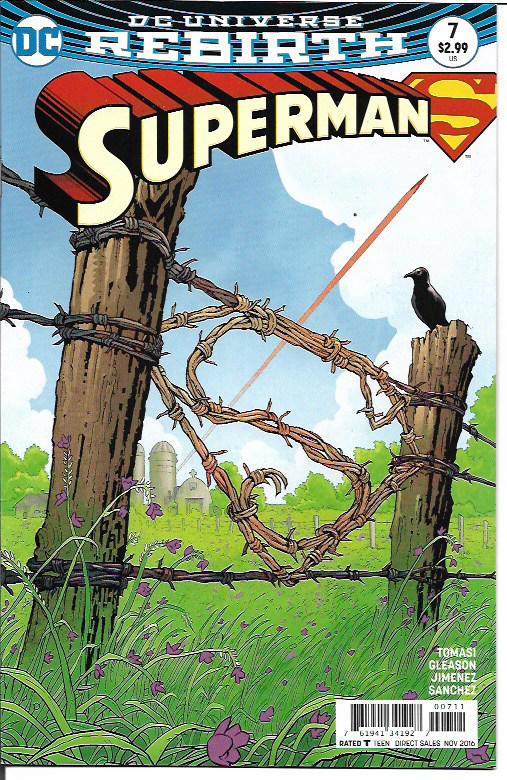 Resolved: I don’t have to know what the heck is going on with DC’s Rebirth event. I’m just know I’m enjoying more of the publisher’s super-hero titles than I was before Rebirth.

A case in point is Superman by Peter J. Tomasi and Patrick Gleason with art by Jorge Jimenez and Doug Mahnke. I like some issues more than others, but that I can single out a one-issue story or a two-issue story as particularly enjoyable is a huge step up from “arcs” designed to tell one story in enough issues to pad the inevitable hardcover and trade editions.

This time around, I’m looking at Superman #7-9. The current series has a married Clark and Lois living with their son Jon in Hamilton County, three hundred miles from Metropolis. It’s an ongoing “mike drop” for those who claim married super-heroes, much less married super-heroes with children, can’t be interesting.

Issue #7 opens with Superman flying around the world to help some of his super-friends. Predicably, Batman is kind of a rhymes-with-wick about it. The others appreciate the help. Then Clark returns home to spend a night at the county fair with his family, promising Lois there will be no Superman-ing that evening. This done-in-one story is funny and heartwarming and the kind of comic books that’ll put a smile on your face.

Things are more serious in Superman #8 and #9, featuring the two-issue “Escape from Dinosaur Island.” Superman and Jon are working on the latter’s science project when one of the strange crystals in the Fortress of Solitude transports them to another dimension. I’m thinking this other dimension is where the Dinosaur Island of DC’s “The War That Time Forgot” stories is located. Those stories were published in Star Spangled War Stories in the 1960s. The youngsters reading this column won’t know this, but those “soldiers battling dinosaur” comics were prime trade bait when your Tipster was but a lad on Cleveland’s west side. They sold out at the drug stores and other general stores. One issue of Star Spangled War Stories could get you two or three other comics in trade with your neighborhood buddies. They were the gold standard of comics.

Anyway, Superman and Jon meet one of DC’s war heroes from the 1960s and later issues. It’s an nostalgic adventure without being dated. It’s a respectful treatment of the hero and it ends on a satisfying note. If Rebirth means more comic books like these, I’m a willing convert. Well done, DC. Well done. 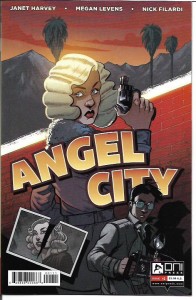 My pick of the week is the amazing Angel City by Janet Harvey with artist Megan Levens and colorist Nick Filardi [Oni Press; $3.99 per issue]. I read the six-issue series in one sitting. I don’t know if this means anything, but it wasn’t until I sat down to write this review that it suddenly hit me that both the writer and artist are women. Maybe it means I got so into the story so quickly that the creators were in the background. Yeah, let’s go with this is such a page-turner the story consumed all my attention until I finished it.

Dolores Dare is a Hollywood hopeful who ends up working for the mob as a leg breaker. Set in 1930s Los Angeles, the six issues show her coming to Hollywood with a fellow hopeful. When her friend’s body is found behind the famous Chinese Theater, Dolores starts looking for the killer.

Angel City includes real people and places. Gangster Bugsy Siegel is a character. The Zoot Suit riots are part of the story. Harvey and Levens draw their readers into the era in which powerful men played powerful games with innocent women and others subservient to their often-depraved desires. As she tracks the killer and tries to bring him to justice, Dolores learns things that maybe she would’ve preferred not to learn.  But no inconvenient truth deters her from her self-imposed mission.

Angel City has terrific writing and art. Almost every issue has an historical essay that ties into the main story and brings that much more reality to it. I love this series a lot and hope we have not seen the last of Dolores Dare. 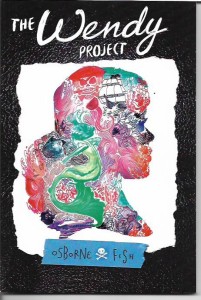 The classic Peter Pan story gets a modern, psychological retelling in The Wendy Project by Melissa Jane Osborne and artist/colorist Veronica Fish [Papercutz/Super Genius; $12.99]. On a late summer’s night, teenager Wendy Davies crashes her car into a lake. Her two younger brothers are in the back seat. John is traumatized by the crash and goes mute. Michael is not found, though Wendy insists he was taken away by a flying boy. The police ask if she has a history of drug use. Her parents send her to a therapist and a new school. As the young woman struggles with her guilt, she becomes more and more convinced that the flying boy is real, and comes to believe Michael wants her to join him in some other place. Osborne and Fish tell this story so well that readers cannot be certain what really happened. Even the satisfying conclusion casts doubt.

Due to be released in May, The Wendy Project is a fresh new take on an old favorite. It’s today, but it’s also yesterday. It is a tale that will move you. Just the thing for comics readers who like to explore different stories in our art form and the different ways of telling them. I recommend it to those readers.