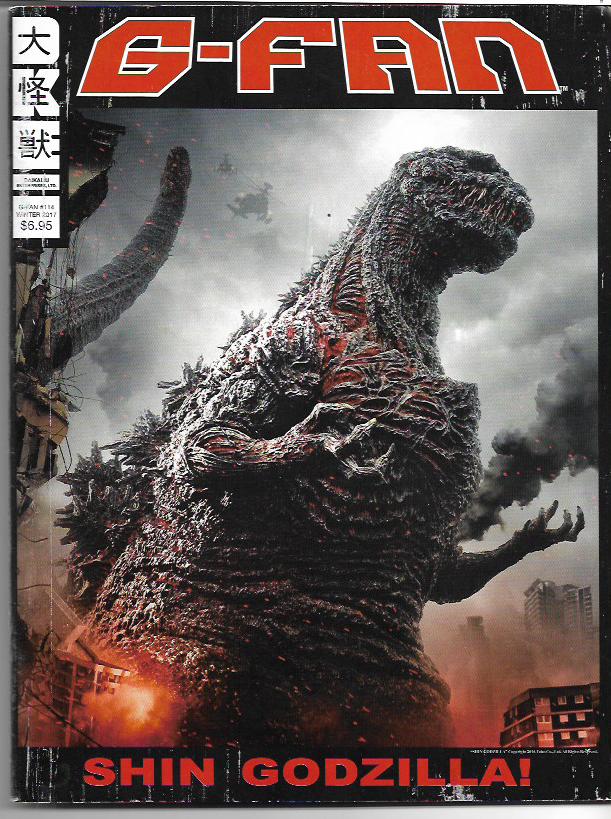 Veteran readers of my online writings know that I am a man of many parts. Yes, I am a comic-book fan and professional. But my second pop culture love is cheesy monster and horror movies. And, of all the cinematic creatures I have enjoyed, none means as much to me as Godzilla. Call him Gojira, his original Japanese name, or call him Godzilla, he’s still the King of the Monsters.

G-Fan #114 [Winter 2017; $6.95] is the latest issue of editor and publisher J.D. Lees’ quarterly fanzine of The Godzilla Society of North America. The 88-page magazine is filled with great articles on Godzilla, amazing photos and more.

The lead articles discuss Shin Godzilla, the first new Toho Studios Godzilla movie in years. The intelligent commentary comes by way of Daniel DiManna and former Godzilla movie actor Robert Scott Field. Both bring a lot to the conversation, though I would disagree with some of Field’s more political observations. I saw the movie during its brief run in the United States and like it as much as DiManna did and more than Field did.

The issue also presents a photo-festooned report on an exhibition of kaiju memorabilia; a retrospective of the little-seen Dogora the Space Monster; a reproduction of the pressbook for Godzilla vs. The Smog Monster; an article on The Lost Continent; writer Allen Debus bringing his considerable science chops to a critical history of flying monsters Rodan and Varan; Lyle Huckins linking lost worlds of five seemingly unrelated films; kaiju art and fiction, a letters column and a news column. It’s the kind of magazine a Godzilla fan can relax with for hours and days.

With the disclosure that your beloved Tipster is also the pastor of the First Church of Godzilla on Facebook, G-Fan #114 is my pick of the week. How could I do less for a magazine whose stated goal is “International understanding through Godzilla!” 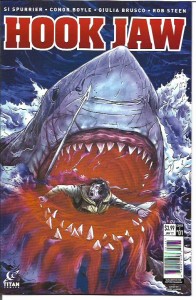 Hookjaw was the star of Action, a mid-1970s British comics weekly that horrified the sort of adults that generally get horrified at comics that strike out in daring new and often bloody directions. Devised by the legendary writer and editor Pat Mills, Action was, to some extent, the Asylum of its time. The Asylum owes much of its success to mockbusters, entertaining movies not unlike movies with much bigger budgets from much bigger studios. Action featured its own “Dirty Harry” type and a knockoff of the film Deathball. With Jaws being the first summer blockbuster, Action also had its very own monstrous white shark.

Hookjaw was the nickname of a shark that had a gaff hook stuck in its jaw. Besides its considerable gore, the strip had environmental themes. Years after Action was toned down and disappeared, a good chunk of Hookjaw was reprinted in Judge Dredd Megazine. I read it there and loved it.

Move ahead to 2017. Titan Comics has launched a new Hookjaw title [$3.99 per issue] that adds a socio-political aspect to the mix of carnage and environmental concerns. Written by Si Spurrier with art by Conor Boyle, colors by Giulia Brusco and lettering by Rob Steen, the new series has shark researchers, Somali pirates, covert U.S. military and spooks and more.

Hookjaw is thought to be a legend, one that even appeared in comic books in the 1970s, until it reveals itself again. That brings the pro-environment protestors and the media to the party. Snacks will be served, albeit it to Hookjaw. It’s a solid adventure tale with mystery and real-world sensibilities. Each issue also has a prose article on some aspect of sharks.

Hookjaw is a terrific comic book series. I’ve read the first three issues and I’m…okay…hooked. I recommend it to readers who, like me, like comics and monster movies. 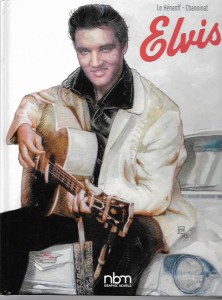 Decades after his death, Elvis Aaron Presley continues to fascinate pop culture historians and his countless fans. I was never an avid Presley fan, but, to this day, I can hear many of his songs in my head and conjure up that image of a smiling young man with a guitar who looked like a real-life version of Captain Marvel, Jr.

Elvis by Philippe Chanoinat and Fabrice Le Henanff [NBM; $19.99] is a hardcover comics biography of Presley. Though the graphic album is limited by its brief 80-page length, the script does cover quite a bit of territory while include at least passing mentions of the other great musicians whose work inspired Presley or were inspired by Presley’s work. Le Henanff’s photo-realistic art adds emotion and weight to the Elvis story. It’s as if each page were hanging in an art gallery just beyond your touch. It’s an impressive book and, to my mind, a natural gift for that Elvis fan you know.

Though I hesitate to use this column to promote my own work, I did want to let you know about my upcoming convention appearances. This list isn’t 100% complete. I’m talking to a few other conventions. But, if you want to meet me, ask me questions and get me to sign a few books, you can find me at these events: