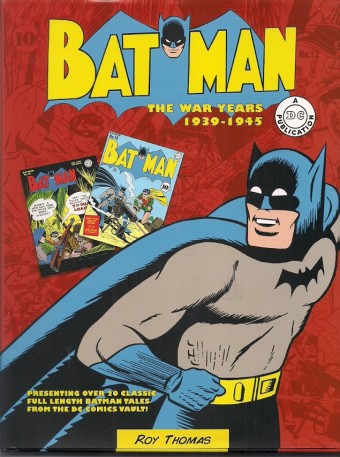 Christmas is a big deal at Casa Isabella. The family works hard at coming up with those great gifts for each other. Beyond my wife and kids, I also enjoy spreading the gospel of comics while spreading holiday good cheer to friends, neighbors and more distant members of our family. Maybe I’m something of a zealot, but I am convinced you can find a comics gift for virtually every person on your gift list. For example…

Have a friend or relative who fought in or lived through World War II? If they were young enough during those war years, odds are good they read at least some comic books. Comic books were easy to carry around and relatively cheap. They were perfect for an audience that had to curb its spending in other areas.

Batman: The War Years 1939-1945 by legendary comic-book writer and editor Roy Thomas [Chartwell Books; $24.99] is one of three books collecting stories for those turbulent times. This hardcover volume reprints 21 Batman stories in full-color and at a coffee-table-size of 11 x 8.5 inches. Also included in the book are 15 classic covers and a running commentary on America and Batman’s adventures during the war.

What did Batman do during the war? He fought spies and saboteurs. He protected scientific secrets from enemy agents. He helped raise money for our allies and our own soldiers. He participated in bond drives. He helped repentant ex-cons find work in our war factories. In one fanciful tale, he recruited the sunken city of Atlantis to help defend the oceans from the Axis menace.

The majority of the stories were written by Batman co-creator Bill Finger, who I’ve long consider the best Batman writer of them all. But there are also terrific stories by Gardner Fox, Joe Greene, Don Cameron and Alvin Schwartz. Artists include Batman co-creator Bob Kane, Jerry Robinson, George Roussos, Jack Burnley and Dick Sprang.

Also from Chartwell Books and Roy Thomas are two companion volumes to this Batman tome: Superman: The War Years 1938-1945 [$24.99] and Wonder Woman: The War Years 1941-1945 [$24.99]. I bought all three for myself, though it will take me a few weeks to get through them. Just flipping through the pages could be dangerous to my deadlines, so I’m trying to exercise the will power to resist giving into the temptation to read them now.

One cautionary note. If you order all three books and they come in one package, lift with your knees. The books themselves weigh about five pounds. Oh, my aching back! 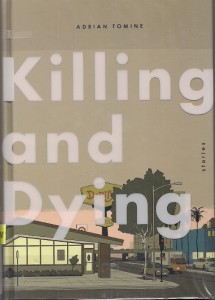 Wikipedia deems Adrian Tomine a popular contemporary cartoonist. His stories, which have been collected in several books, are down-to-earth slices of life. Some would describe him as an alternative cartoonist, which is comics industry shorthand for works that don’t revolve around action heroes or monsters. I’m increasingly weary of the “alternative” designation. I’ve seen it use to both denigrate creators and also to elevate them to absurdly lofty pedestals. The clear and obvious truth is that there are all kinds of great comics that tell all kinds of stories.

Tomine’s Killing and Dying [Drawn and Quarterly; $22.95] presents six new stories by the cartoonist. I follow Tomine’s work because he is – bottom line – a terrific storyteller. He doesn’t resort to artsy fartsy gimmicks aimed at the faux-intelligentsia readers who consider literature from the unreality of academia. While his tales would certainly appeal to those seeking literate expression, they succeed because they’re good stories told with clarity and passion.

Each of the six stories is different from the others, related only by Tomine’s craftsmanship and style. We meet a landscaper trying to create a new art form, a young woman whose bears a resemblance to an X-rated entertainer, a girl who wants to be a stand-up comedian and more. Each tale took me into its own world, introduced me to its lead character or characters and left me wanting to know what happens to them next. It’s not that these stories lack satisfying conclusions. They’re complete creations. I simply wanted a bit more time with them.

Killing and Dying is going to be high on my gift-giving list this year. I always like to challenge my comics friends to try something a bit of their usual graphic playgrounds. 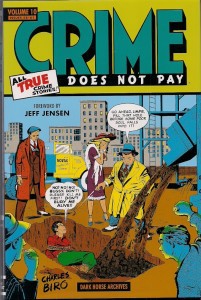 Crime Does Not Pay Archives: Volume 10 [Dark Horse Books; $49.99] reprints issues #58-61 of the legendary comic-book series published by Lev Gleason and edited by Charles Biro and Bob Wood.  The issues were cover-dated December 1947 to March 1948.

Crime Does Not Pay, which we have discussed on several occasions, was a blockbuster hit that alarmed anti-comics activists as well as parents. The editorial position was that these “true crime stories” would keep your readers on the straight and narrow, but, as writer Jeff Jensen says in his introduction, the dire payment for crimes portrayed doesn’t usually come until the final panels of a story. Up to that point, the lawbreakers are getting away with all manner of mayhem and murder.

These Crime Does Not Pay collections rank high among my list of the things which make me very glad to be a comics reader in this modern age. I get a kick out of reading the stories, drawn by such great talents as George Tuska, Fred Guardineer, Jack Cole, Dan Barry and others. When I have the time, I also get a kick out of researching these “true” stories and discovering where the writers played fast and loose with the facts.

When it comes to fast and loose, nothing can beat the letters and testimonials to the comic book that usually fill a page or two in every issue. Parents and educations praise the guidance the comic offers to its readers to keep them honest. Ex-convicts talk about how they wish they’d read Crime Does Not Pay before they committed their crimes. Especially moving are the earnest notes from kids who were ready to do crime until they read an issue of the comic book. My suspicious nature being what it is, I don’t believe any of these letters were real, but they are still fun to read.

In the spirit of the season, I’d recommend these volumes to readers of true crime willing to accept the “true” being somewhat less than 100% accurate, to comics history fans who want a taste of the crime books that ruled the industry for a time, and – maybe it could work – someone you think might be in danger of embracing the wrong side of the law.

I’ll be back next week with more holiday tips.