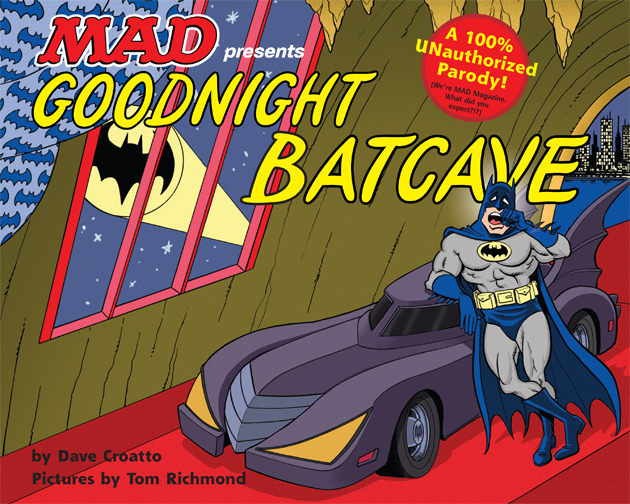 Goodnight Batcave by Dave Croatto with pictures by Tom Richmond [MAD; $14.99] claims to be “a 100% UNauthorized parody! (We’re MAD Magazine. What did you expect!?). Well, while I don’t expect “the usual gang of idiots” to be math whizzes, I feel I must point out that Batman and MAD are owned by the same corporation. So, at the very best, this hardcover is “a 50% UNauthorized parody!” For that matter, considering how many “Goodnight Moon” parodies I have seen over the years, I don’t think the 50% puts MAD in actual jeopardy. But I digress.

For I have not come to bury Goodnight Batcave, but to praise it to all who read this column. It is one of the funniest books I’ve read all year. I read it aloud to myself and I had to stop several times when my laughing prevented me from reading it. I have ordered both of my children to get married and start giving me grandchildren to whom I can read this book. I want those moppets to love it as much as I do. I long to hear “Read it again, Granddad,” which I will do no matter how much their parents want them to go to sleep. Because it’s not me who will have to deal with kids who didn’t get enough sleep the night before. It’s the circle of life!

Croatto’s hilarious words are perfectly supported by the drawings of the most excellent Richmond. You could frame almost every page and put it on a wall and you would laugh whenever you passed these works of art. Which is why I recommend you not hang these drawings on stair walls. You could laugh and miss a stair and fall to some injury. Such a mishap is only hilarious when it happens to someone else, so be sure to take a selfie and send it to me before you hit.

Goodnight Batcave is my pick of the week. As soon as my kids tell me how many grandchildren they are giving me, I’m going to order a whole mess of copies. 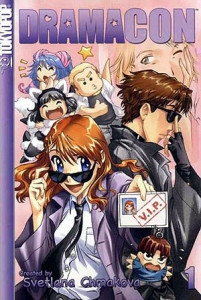 So much English language manga has come out over the past couple decades I was not remotely able to keep up with it. Which is why, from time to time, through the fine service of my local library, I often request manga from years past. This week, I want to tell you about a three-book series that came out in 2005 and which is only available on the secondary market. Which I’m doing because Dramacon Vol. 1 by Svetlana Chmakova [TOKYOPOP; October 2005] just charmed the heck out of me with its story of young manga creators who meet at an anime convention.

Barely legal fledging writer Christie is set up in artist alley at her first convention ever. She’s selling the comic which she wrote and which her boyfriend Derek drew. Already tense from the newness of it all, Christie is taken aback by Derek’s flirting with pretty cosplayers and other fans. She flees from their table and, having a tough time navigating through her tears, runs into a mysterious, handsome young stranger. Which is all the summary you’re getting from me.

Chmakova told a story that held my interest. For the most part, I found her characters well-developed, the notable exceptions being friends of Christie and Derek. She does a terrific job capturing the drama, comedy, insanity, hustle and bustle of a decent-sized convention. There is even a brush with greatness that struck me as very true to life. There is also one very dark scene that earns the book its teens and up rating.

Dramacon is worth searching for. I’ve requested the remaining two volumes from my library and will be looking for my own copies when I’m at conventions this spring and summer. If you have any regard for shojo manga, I think you’ll like this series. 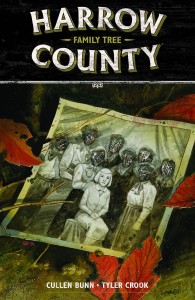 The ongoing story of Emmy, descendant of a witch who once brought ruin to the county, continues as she does her best to protect people who both rely on her and frequently fear her. It is a solitary life for the young woman, sweetened by the company of a precious few friends.

In this volume, which might be the scariest one to date, Emmy meets her “family” and it’s not a joyous event. These others, as powerful as Emmy, have their rules which would spell doom for those Emmy has been protecting and perhaps for the young witch herself. There is considerable dread to be pushed aside and boundaries to cross along the way. I may be the black sheep of my birth family, but I never had to deal with creatures as terrifying as these.

Bunn excels at giving life to Emmy. The young woman is caring and formidable and likeable. She has a steely courage and determination that puts steel in the reader’s spine as well. Crook’s art is down to earth and still moody as all get out. Nothing is exactly normal in Harrow County. There are dark corners everywhere.

I’ll continue to recommend Harrow County to all those who desire a different take on the horror genre. There are four volumes in the series to date with two more scheduled for June and October of this year. Here’s the list…