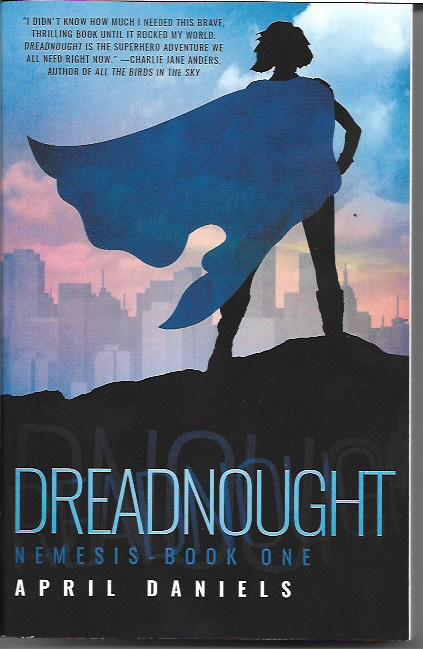 This week’s column is all about the girls. I’m looking at a trio of books starring courageous young women in stories that will amuse, excite and, in one case, certainly expand your view of the world. Don’t ask me to choose between them. They are all so good that all of them deserve to be my pick of the week.

First up: Dreadnought Nemesis Book One by April Daniels {Diversion Publishing; $14.99]. In this young adult prose novel, Danny Tozer, who is transgender, inherits the powers of the greatest super-hero in a world filled with such heroes and their foes. When the dying Dreadnought transfers his powers to Danny, the fifteen-year-old finds herself transformed into the girl she always knew she was. It is the answer to her dreams and the start of challenges unlike any she has faced before.

Danny’s abusive father, whose solitary parental impulse has been to make his son a man, demands they find a “cure” for her condition. Her mother tries to be understanding, but is hopelessly subservient to her husband. Danny’s best friend hits on her. As for the super-hero community…

Danny is somewhat taken under the wing of a super-hero team whose members have their own agendas. Some openly welcome her. Some only want the power of Dreadnought in their ranks. One is disgusted by the very thought of a transgender super-hero and wants to find some way to transfer Dreadnought’s powers to a more suitable champion. One has secrets of her own.

Danny has one true friend and ally in Calamity, a young woman who is a “grey” hero and not affiliated with the more visible heroes. But the two girls find themselves in mortal peril when they try to bring down Utopia, the cyborg who killed the previous Dreadnought.

Daniels does well with the human drama and the super-hero action of this novel. Danny struggles with her life and powers, but is brave and determined. Some of the human drama of this book will nigh unto break your heart. Some of the super-hero action is brutal enough to make you wince. I was drained by the time I finished reading this novel…and eager for the next book in the series.

Dreadnought Nemesis Book One is suitable for teens. I suspect this book will be challenged by some because, not unlike the character Graywytch, they can’t abide the notion of a transgender super-hero. The most polite response I can manage for those some folks is that I wish them a speedy journey to the dustbin of history.

If there are awards for prose fiction related to comics and such – and, if there’s not, there should be – I would earnestly nominate Dreadnought Nemesis Book One for that honor. After you read it, I think you’ll feel the same. 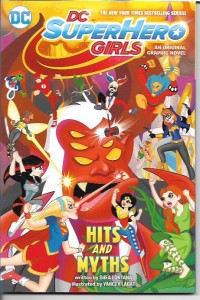 The students of Super Hero High School are back to thrill us anew in DC Super Hero Girls: Hits and Myths [$9.99], an original graphic novel by Shea Fontana with art by Yancey Labat, colors by Monica Kubina and lettering by Janice Chiang. This very cool take on some of the most popular DC heroes and villains is a delight in multiple venues: videos, comics, toys and more.

This time, Wonder Woman, Bumblebee, Batgirl, Supergirl, Poison Ivy, Katana and Harley Quinn are studying The Odyssey for a class taught by Professor Etrigan (aka the Demon), excited about a slumber party on Wonder Woman’s Themyscira and trying to find Batgirl’s missing Batplane while facing fearsome foes from both this world and other realms. If that seems like a lot for one sentence, it’s on account of this 120-page graphic novel being packed with great characters, dangerous villains and action and humor a’plenty.

The book is aimed at kids eight to twelve, but older readers (and really older readers like me) will still enjoy it. Old-time comics fans will get a kick out of seeing so many characters from old-time comic books. “Suitable for all ages” has seldom been as true as it is here. You’d have to be a total grumpy-puss not to have fun with this graphic novel. Highly recommended. 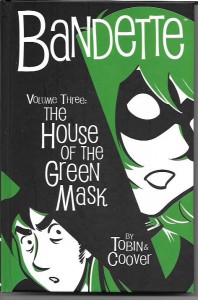 The greatest thief in all the lands returns in Bandette Volume 3: The House of the Green Mask by Paul Tobin and Colleen Coover [Dark Horse; $14.99]. She’s out to solve the greatest of all mysteries, the location of the fabled house that contains the greatest of all wisdoms and treasures. Yes, I used “greatest” three times in this one paragraph.  But, my darlings, Bandette, she deserves all of our praise and our love and, at least, most of our chocolate. I have it bad for this young lady.

Tobin and Coover reach new heights in this 128-page hardcover. The title story is a page turner that slows down just enough to present some truly fine moments for the supporting cast. There is very real peril facing our heroine and her friends, but, at no time, does it diminish the exuberant fun that is the hallmark of this character.

In addition to the title story, the book features an introduction by Kurt Busiek, two short comics story, a prose story and scads of background information and sketches. It’s a steal at the price and that’s something of which Bandette would surely approve.

I recommend all three volumes of this series. When the fourth one comes out, I’ll recommend that one as well.

Bandette Volume 3: The House of the Green Mask