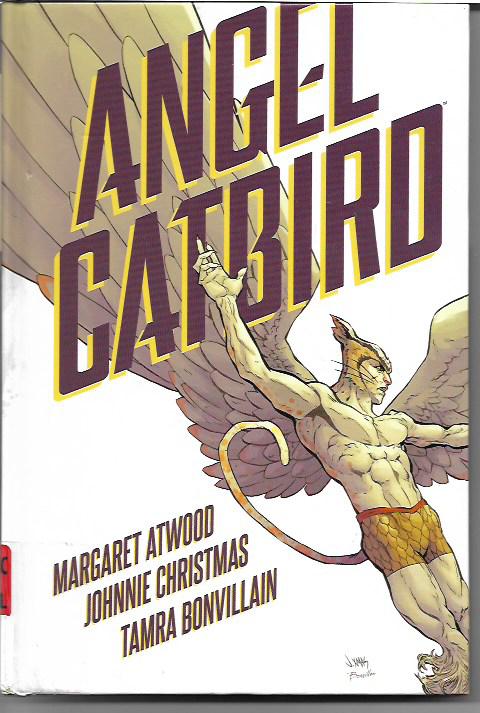 I probably sound like a broken record to veteran readers of “Tony’s Tips” and my other writings about comics, but nothing gets me more excited than the amazing variety of material available to today’s comics readers. Today’s “Tips” is a shining example of this as we look at a super-hero series by an award-winning novelist, a comics adventure based on a Disneyland roller coaster and a different take on a classic Japanese manga.

First up is Angel Catbird Volume 1 by Margaret Atwood with artist Johnnie Christmas and colorist Tamra Bonvillain [Dark Horse Books; $14.99]. Atwood is best known for her 1995 novel The Handmaid’s Tale and other works. She’s also a poet, literary critic, essayist, environmental activist and inventor/developer. Christmas created and illustrated several acclaimed comics. They’re a formidable team and this graphic novel is further enhanced by Bonvillain’s colors. Bonvillain has worked with Greg Hildebrandt and also for many/most of the top comics publishers.

Angel Catbird is a super-hero comic book. Atwood clearly revels in the genre and the proof is in this 72-page debut of her character. Though she plays with familiar comics tropes – a scientist whose gene-splicing experiments turn him into a creature he never could have imagined; an evil man-rat corporate villain; a hidden race of cat people – she tells her story with such delight and skill that none of that impaired my enjoyment of this book. When I got to the end of this first hardcover book, I immediately wanted to read the second volume in the series. Fortunately, that volume is scheduled to appear in just a few weeks.

The book’s good guys are heroic and likeable, especially the odd-but-wonderful Count Catula. The bad guy is clever and dangerous. Feel free to hiss at him. The writing, the art, the storytelling, the coloring, are all wonderful. Yeah, this is a super-hero comic book, one fine super-hero comic book.

Angel Catbird is my pick of the week. The comics material is top-notch. The book is further enhanced by lots of bonus material and solid facts and tips about our animal neighbors on this planet. By my standards, it’s suitable for all ages. It’d make a terrific gift for any animal-loving comics reader. 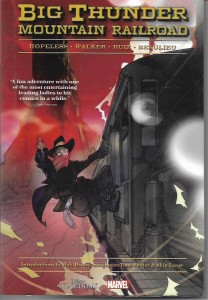 Having seen Disney Parks attractions like Pirates of the Caribbean, The Haunted Mansion and Tower of Terror turned into movies – some more successfully than others – it didn’t surprise me that Disney and Marvel Comics could also turn such park attractions into comic books. I wasn’t sold on this idea initially. I kept passing on the comic books and the collections thereof.

Haunted Mansion by Joshua Williamson and Jorge Coelho [Marvel; $24.95] changed my mind. I read the first issue in a free Halloween ComicFest edition and liked it will enough to request a copy of the collection from my local library system. The tale of young Danny, lonely since the death of his globetrotting grandfather, entering the Mansion, interacting with some of the 999 spooks living there and becoming their hero was great fun. After reading this graphic novel, I requested other titles from the Disney Kingdoms and Marvel line. My personal jury is still out on Figment and Seekers of the Weird, but another book scored big with me.

Big Thunder Mountain Railroad by Dennis Hopeless with artists Tigh Walker, Felix Ruiz and others [Marvel; $24.99] is a action-packed supernatural western with a haunted mine, a greedy mine owner, the mine owner’s rebellious daughter, a masked outlaw and a town posed on the brink of derstruction. Abigail Bullion is a feisty and not particularly proper young woman who rides a horse better than any man she knows and who has a keen sense of right and wrong.

The characters are finely tuned components of the story. Even with their allies, they can be prickly. The tale moves both smoothly and swiftly with very good writing and storytelling. The real villain of the piece is heinous, indeed. The threat from beyond our world is formidable. There’s even redemption for one character. We know how much Tony loves a good redemption story.

These aren’t classic comics stories, but they are entertaining and well worth reading. If you have a Disney parks fan in your life, I think they would enjoy them even more than I did. 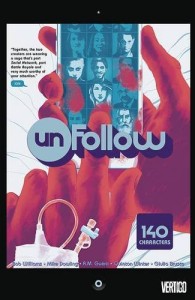 My initial impression of Unfollow: 140 Characters by Rob Williams, Mike Dowling and R.M. Guera [Vertigo: $14.99] was that is was not unlike Battle Royale, the Japanese manga series by Koushun Takami and Masayuki Taguchi, based on the former’s novel. In the book and the manga, junior high school students are kidnapped to an island and forced to fight each other until only one remains alive. It is one of the most unsettling comics I have ever read.

In Unfollow, a dying social media billionaire is going to leave his entire fortune to 140 people (characters). The catch is that, when one of them dies, the shares of the others are increased. If you’re thinking folks are going to start dying, you’re thinking correctly.

Comparing Unfollow to Battle Royale is fair game, but I would not want you think I’m not intrigued by the first six issues that have been collected in this volume. Unfollow is much more high tech and the stakes are bigger. Along with the usual Vertigo weirdness – one of the characters cut off his own legs and wears a wedding dress to the island gathering of the 140 – there are some sympathetic people who, though flawed, are people I can root for. Additionally, the story isn’t confined to the island. Almost the entire cast leaves after the billionaire dies and one of the 140 is murdered by party or parties unknown.

ABC is said to have Unfollow in development for televison. Bringing us closer to the day when comic books completely control all of the TV networks and cable channels. I will cheer when Sister Wives and Duck Dynasty are pushed off the air by DC Bombshells and Howard the Duck. Comic books are much more real to me than so-called reality shows featuring deplorable blights on mankind.

I enjoyed Unfollow: 140 Characters. I look forward to Unfollow: God Is Watching, which should be out right now. A third volume is due in July. If you’re a fan of Vertigo, I think you’ll like this series.