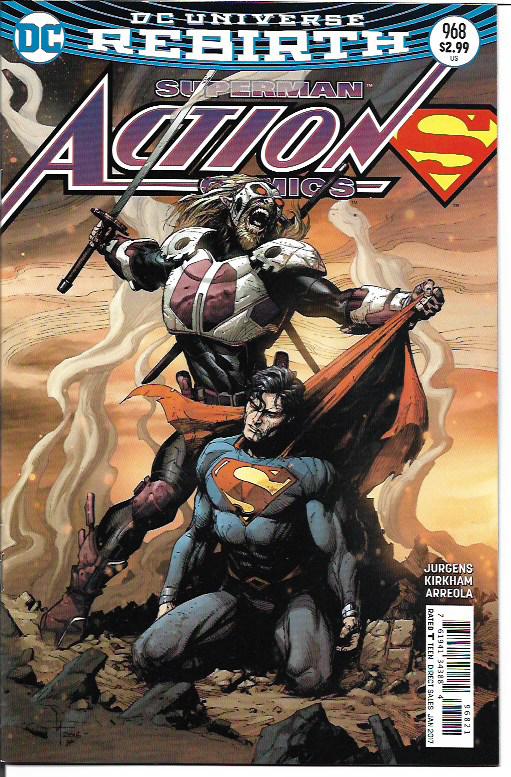 While I remain pretty much clueless as to what’s going on with DC Universe Rebirth and what caused these changes to said universe, I am certain that I’m enjoying the heck out of these kind of sort of reboots and/or revamps of the New 52 status quos. Without apology, I embrace both my ignorance and my bliss.

Action Comics is a good “case in point” of my bliss. I usually read ongoing titles in batches. The twice-monthly publishing frequency of Action Comics means I have a bigger piece of the pie whenever I read the title. As for what’s inside these comic books, there is so much cool stuff that I don’t mind not knowing the cause of it all. Not even if it involves Alan Moore and Dave Gibbons’ classic and rightly legendary Watchmen. I’ll circle on back to that discussion in a bit.

Action Comics #963-968 [$2.99 each] has a Superman from some other plane of existence who is married to the Lois Lane from his reality and who, with her, is raising a young super-powered son. After the death of this world’s previous Superman, Lex Luthor put on a super-suit and declared himself Superman. There’s a Superwoman or two in the mix, as well as a Clark Kent who isn’t Superman and who doesn’t seem to be anything other than a Earth-born human being. Throw in a mysterious corporation other than Lexcorp and some beings trying to change the future by killing Hitler, excuse me, killing Luthor before he becomes the Darkseid of our world, and I’m really hooked. What does this all mean? Where is this all going? When can I read the next issue?

Dan Jurgens, who was one of the Superman creators during the epic “Death of Superman/Funeral for a Friend/New Supermen” era for the Man of Steel, is the writer. Jurgens understands the family dynamic of this Superman, Lois, and Jon. Their scenes seem very real to me. He does an equally good job with the mistrust between Superman and Luthor, and the mystery of the human Clark Kent.

Artists for the issues include Patrick Zircher (#963-964), Stephen Segovia with inker Art Thibert (#965-966), and Tyler Kirkham (#976-977). Zircher’s work is my favorite of this artistic gathering, but all of the issues look great with the characters looking the same no matter who’s drawing them. I prefer ongoing characters to be “on model” in ongoing comic books.

Where is DC Universe Rebirth taking us? I’m hopeful it’s taking us to a consistent, fun and interesting universe. If that destination involves Watchmen, I’m fine with that. Like movies made from books, Moore and Gibbons’ original work will always be there for us. It’s not diminished by further use of the characters, especially if that use is respectful. My personal recent experience with DC Comics is that the company is more respectful of older creators than it has been in, literally, decades. I’m choosing to trust DC Comics this time around. 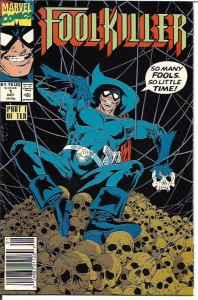 If you want to read the 1990s ten-issue Foolkiller series by Steve Gerber with artist Joe Brozowski (as J.J. Birch), you’ll have to track down the original comic books. Because, in a shocking lapse, Marvel Comics has never collected this series.

Ross G. Everbest, the first Foolkiller – there have been four – was a religious fanatic. Greg Salinger, the next one, based his kills on people who he considered guilty of materialism and mediocrity, or of lacking “a poetic nature.” In the 1990s series, Kurt Gerhardt goes after violent criminals with the encouragement and inspiration of the incarcerated Salinger and the assistance of some underground supporters of Salinger. As shown in the 1990s series, Gerhardt’s definition of what constitutes a violent criminal expands to insane proportions. But it’s a fascinating crime/horror story with a often sympathetic killer. I’d rate it among the best comics of the 1990s.

I mention Foolkiller for two reasons. The first is that it really should be collected. The second is that, somewhat updated, it would make a terrific movie. Not a big-budget Marvel movie of the sort we have become accustomed to, but a smaller “B” movie that would fit nicely into the “slasher movie” genre. Even with all the use both Marvel and DC are getting out of their vast libraries of heroes and villains, some characters are better suited to the smaller films.

Foolkiller has all the elements necessary for a horror movie. You have a killer who seems unstoppable. You have a great many victims and the potential to kill them in interesting ways. As a direct-to-video movie with a modest (but not absurd) budget, I think it would be worth watching and turn a decent profit for Marvel. 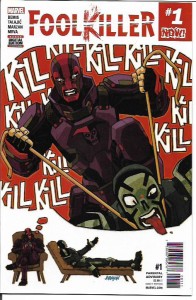 Getting back to comic books, there was a fourth Foolkiller who was in two “Marvel MAX” mini-series. I don’t know anything about him, but I’ve ordered complete sets of the two mini-series and may well write about them in the future. In the meantime, Salinger is back in a new series that made its debut in November.

Foolkiller #1-2 [$3.99} finds Salinger working for S.H.I.E.L.D. as a psychotherapist whose patients are murderous vigilantes. His job is to determine if the killers could be of use to the organization. I sigh in sadness as I recall when S.H.I.E.L.D. was made up of good guys. Thankfully, that’s kind of sort of the case in the current TV series. Bless you, Phil Coulson.

Salinger has a job and a girlfriend. But the old urges remain and, at one point, he kills a patient he believes can not be re-purposed for S.H.I.E.L.D. work. His immediate superior thinks about this and decides Greg’s job description should be expanded to include such removals. Yes, I am still sighing.

Thus far, I’m not a fan of this new series. Writer Max Bemis isn’t doing a bad job, but he’s not engaging me anywhere near the way I was engaged by Gerber’s series. The art and storytelling by Dalibor Talajic with inker Jose Marzan Jr. and colorist Miroslav Mrva has its moments, but isn’t knocking my socks off. I’ll still with the series for a few more issues, but it hasn’t yet won me over. Your mileage may vary, so consider my comments neither a recommendation or a warning to avoid the title.

I’ll be back next week with more reviews. In the meantime, for the latest Isabella writings and other hopefully cool stuff, check out “Tony Isabella’s Bloggy Thing” [tonyisabella.blogspot.com], follow me on Facebook [https://www.facebook.com/tony.isabella], or follow me on Twitter [@thetonyisabella].