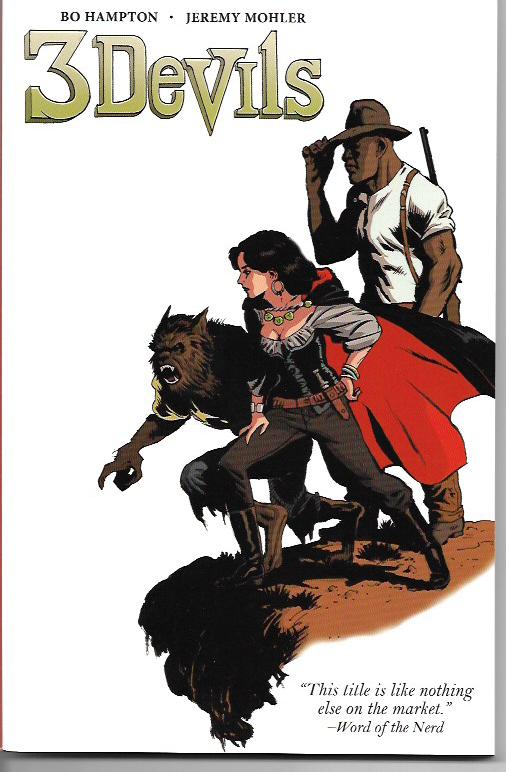 Welcome to 2017, which will certainly be the most challenging year of my lifetime and for many, if not most of us. We who make comics and would stand against bigotry, dishonesty, sexism, xenophobia, zealotry and the lawlessness of the rich and the powerful in their unending pursuit of even greater wealth and power, we can and must do what artists have always done. We can use our art to challenge the rich and powerful, and to give comfort and support to those who are victimized by them. In the words of the sainted Harvey Pekar, “You can do anything with comics.”

Comics creators have the great power to reveal the human condition at its best and at its worst, and, in doing so be a force of change for the better. In this scary new year, more than ever, “with great power, there must also come great responsibility!”

I think I read that in a comic book.

3 Devils by Bo Hampton with colorist Jeremy Mohler [IDW; $19.99] is a “supernatural western.” It reprints the first four issues of what I hope is an ongoing series. Its title heroes sound like the start of a joke: “a young Romani woman, a zombie and a werewolf walk into a bar…”

Tara, the Romani woman, is a child when she witnesses her father, brother and mother slaughtered by a vampire and his human henchmen. Marcus is a zombie with free will who is perhaps immortal. Though he says he has no soul, something about Tara speaks to something within him. Oliver is a sideshow freak who happens to be an actual werewolf. He joins the now-grown-into-young-womanhood Tara on her quest to find the vampire and avenge her family.

Sidebar. Set in the Old West as this story is, Tara is called and refers to herself as a “gypsy.” I take no exception with that; it’s historically accurate. However, writing these words today, I will use the word “Romani” throughout this and future reviews.

Hampton is a one-time collaborator of mine and a friend. He drew a Moon Knight story of mine back in 1983 or thereabouts. I’ve been a fan of his work – writing and drawing – ever since. This collection of 3 Devils #1-4 is solid on all fronts. A cracking good story and art that adapts to the needs of the action, the human drama and the supernatural spookiness. Mohler’s color work is every bit as good. If you like a good dose of scary with your western action, this is the trade paperback for you. I loved it and recommend it to all of you. Check it out. 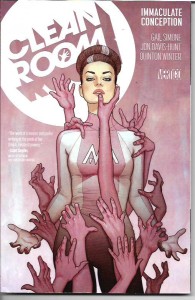 Gail Simone’s Clean Room is unnerving and a half. I read an issue, think I’ve got it figured out, then the next issue hits me with a scary surprise I didn’t see coming. I read the first six issues as they came out and then reread them in Clean Room Vol. 1: Immaculate Conception [$14.99]. I think the series works best when read in big chunks. But I digress.

In this opening volume by Simone and artist Jon Davis-Hunt, we’re introduced to the two strong women. Astrid Mueller is the founder of the Honest World Foundation, which feels more than a little like a cult and will make you shiver. Chloe Pierce is a reporter whose fiancé was a devoted Mueller follower until he blew his brains out. Sudden and shocking death turns out to be something fairly common around the Foundation. What these two women have in common is that they see things most other people can’t see. That awful knowledge is what drives their conflict and uneasy alliance.

Simone has created lots of interesting supporting characters with some of them being so likeable the reader worries about what will happen to them. Davis-Hunt, who also colors Clean Room with Quinton Winter, draws distinctive characters. His storytelling is spot on, as is ability to portray both the most human and the most horrific moments.

Clean Room is one of the best new comics of the decade. The second volume of the collected series, reprinting issues #7-12, should be available at fine comic-book shops and bookstores everywhere. You should embrace this series, shivers and all. 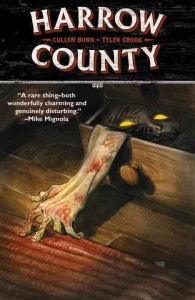 Harrow County Volume 1: Countless Haints by Cullen Bunn and Tyler Cook [Dark Horse; $14.99] is described as a “southern gothic fairy tale” in its back-cover blurb. Collecting the first four issues of the ongoing comic-book series, this first volume introduces us to young Emmy, who is more than she initially appears to be, and takes us to the back-woods Harrow County. The location is a key character in the story, every bit as disturbing as any of the creatures Emmy and the reader will meet. It’s a place where things have just not been right for a long time.

Because so much of the fun of reading this book comes from making discoveries alongside Emmy, I’m going to refrain from telling you anything else about the story. I will say Bunn’s writing is smooth, filled with emotion and suspense. Crook’s art suits both the human drama and…the other stuff.

I was introduced to Harrow County via a free Halloween ComicFest comic book, which, of course, the point of free special event comic books. There are three more Harrow County collections at this time and I plan to read all of them.