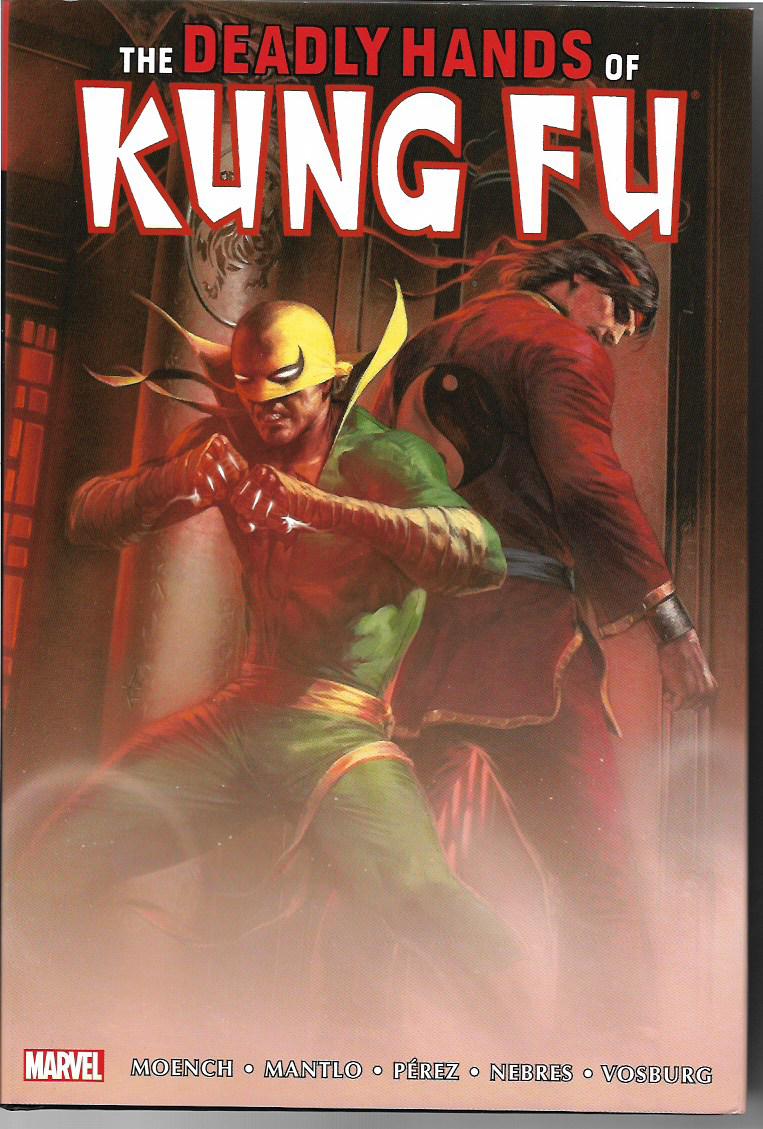 Weighing in at 6.3 pounds and 1152 pages, Marvel’s Deadly Hands of Kung Fu Omnibus Vol. 1 [$125] reprints issues #1-18 of the 1970s black-and-white magazine, The Deadly Hands of Kung Fu Special #1, and the all-article The Deadliest Heroes of Kung Fu #1. It also has three new introductions by Gerry Conway, Doug Moench and my own bad self. Conway created the Sons of the Tiger feature, Moench wrote more Shang-Chi, Master of Kung Fu stories than any other writer and I edited several issues of the title.

Because they are such beautiful and impressive volumes, I tend to get a little teary when I write about these omnibus books. That’s partly because holding them is like a religious experience for this comics guy who never dreamed such wonders could exist back when I was working on magazines like Deadly Hands of Kung Fu…and partly because I usually manage to drop them on my foot while I’m trying to read them. In the right (or wrong) hands, these omnibus volumes are deadly weapons.

My introduction focuses on the text articles we ran in Deadly Hands because our budget only allowed for maybe half of our overall page count to be comics stories. While finances might have been the most pressing reason for the use of these pieces, all of us who worked on them were enamored at producing something that was an honest-to-gosh magazine and not just a big comic book. We strived to come up with creative topics and presentations. Looking back on them today, I’m impressed. These issues look better than their low budgets and too tight deadlines should have allowed.

I didn’t get to write about the comics stories, but readers fondly remember them with good cause. We saw early work of great creators like Moench, Bill Mantlo, Steve Englehart, Jim Starlin, Alan Weiss, Chris Claremont, George Perez, Mike Vosburg, Rudy Nebres, Keith Pollard, Keith Giffen and others, appearing alongside veterans like Denny O’Neil, Dick Giordano, Don Perlin and Judomaster co-creator Frank McLaughlin. All behind tremendous covers by Neal Adams, Bob Larkin, Earl Norem, Luis Dominguez, Nick Cardy and Harold Shull. I was thrilled to have been able to work with so many of these fine talents and, even allowing for my occasionally inept editing, proud of what we all did on these magazines.

While Marvel’s Deadly Hands of Kung Fu Omnibus Vol. 1 doesn’t come cheap, you’ll be amply rewarded for your purchase with hours, nay, days and weeks of entertaining reading. I recommend it to fans of the martial arts genre, to us aging children of the 1970s, and to younger readers who will be astonished to discover these legendary comics magazines of the past. 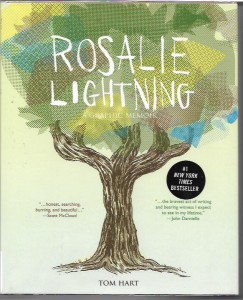 As cool as the Deadly Hands of Kung Fu book is, this week, there is only one possible choice for my pick of the week. It’s cartoonist Tom Hart’s heartbreaking Rosalie Lightning: A Graphic Memoir [St. Martin’s Press; $19.99]. It’s the real-life drama of the death of Hart’s young daughter, and his and his wife’s journey to find a way of coping with that unimaginable loss. It has been justly praised by comics creators and critics for its honesty, beauty and bravery. As a parent myself, my heart sunk deep into my gut as I read this amazing work and didn’t feel right for many days after I finished it. Great comics have the power to touch the soul. This is one of the greatest of this or any other year.

Young as she is, Rosalie emerges as the most complete character of this memoir. We get to know her well and feel, if only from afar, the agony of her loss. Hart’s world doesn’t seem complete without her. His and his wife’s sometimes desperate search for something to make their lives whole again is simultaneously heroic and tragic. I actually hugged this book more than once.

During the events of this memoir, the Harts moved from New York and put their apartment up for sale. The housing market was down. One realtor bailed on them. The co-op board refused to let them sell at a price it considered too low. They were very nearly broke. So does the uncaring world refuse to give suffering people a respite from their sorrow. Instead, it piles on. I know the sheer frustration of such things and the manifest unfairness of having to deal with them when your heart has been shattered.

I can’t be objective about Rosalie Lightning. It hits me in so many places where it hurts. But it also allows for light or, at least, the possibility of light. This book is great comics and it is also great literature. It needs to be in the collection of every serious devotee of our comics art form. 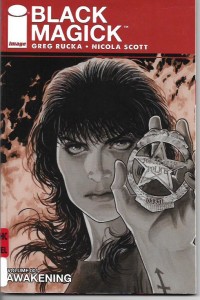 Black Magick Volume 1: Awakening by Greg Rucka and Nicola Scott [Image; $9.99] collects the first five issues of the ongoing series about Rowan Black, a police detective who is also a witch. Veteran readers of my writings will recall I love cop stories, especially when they are combined with elements of science fiction, super-heroes or the supernatural. I was hoping to enjoy this new series and Rucka and Scott didn’t disappoint me.

That the writing and art were first-rate didn’t surprise me. That the story threw some unexpected chills and developments was to be expected from these talented creators. Were I so inclined, I could gush about the intriguing characters and everything else wonderful about this trade paperback. I enjoyed this book and would recommend it to all of you. But…

What I really want to gush over is the back cover copy on the trade paperback. It’s one of the best sales pitches I’ve read in a very long time. Here it is…

SOMETHING WICCAN THIS WAY COMES.

Rowan Black knows:
the scent of a body burned at the stake the power of a murderer’s severed left hand the danger of blood spilled on stone beneath the new moon.

Rowan Black is a witch.

Rowan Black knows:
that a badge is worth exactly as much as the person carrying it that motive is overrated that you always watch your partner’s back.

Rowan Black is a cop.

She knows something else.

She knows magic is real.

The problem is, somebody else knows it, too.

Damn! That’s an irresistible come-on. I can’t wait for the second volume.

Here’s wishing my readers here and elsewhere, comics retailers all across this great world of ours, and my fellow comics professionals the happiest of holidays and the merriest of Christmases. We face some enormous challengers in 2017, but our art and our friends can get us through them and help us work to make a better world. We’ll always be stronger together.