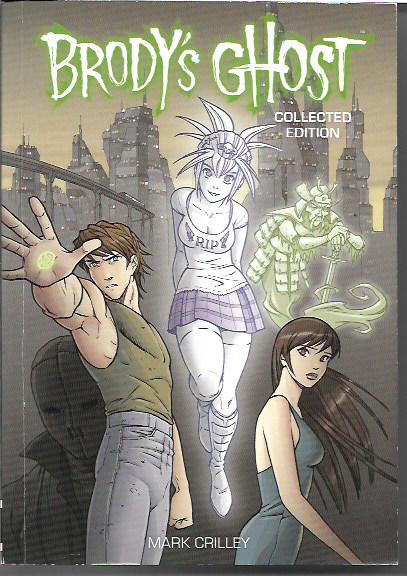 Maybe it’s the approaching holiday season, but I’m in such a great mood this week that I’m writing about not one, not two, but three picks of the week. Do you hear that, Santa? Is that worth another check in the “nice” column?

Mark Crilley’s Brody’s Ghost Collected Edition [Dark Horse Books; $24.99] gathers all six volumes of the supernatural thriller by the creator of Akiko and Miki Falls. The former is one of my all-time favorite comic-book series, one I used to read to my children when they were young enough to let me do that sort of thing. The latter is a love story with the heroine being a high school senior and the hero a young man with a secret. Crilley has also written books on drawing comics and manga. Simply put, he is one of the most skilled creators of our time.

Brody’s Ghost is a 600-page epic combining the search for a serial killer with a love story and supernatural action. Brody is having a bad life, losing his girlfriend, his job and even his home. But his world gets turned even more upside down when he sees a ghostly girl, gets recruited into her quest to bring the serial killer to justice and discovers he has hidden powers. The girl isn’t telling him everything, the killer is as mysterious and scary as any you’ve seen on shows like Criminal Minds and the powers, well, they might be pushing his former life even further away.

Manga is a big influence on Crilley’s work; he’s taught English in Fukushima, Japan, and Taiwan. But his mastery of the comic art form is evident in his instructional books and videos. Just as this epic adventure combines elements of several genres, Crilley brings all his diverse influences and skills to bear in this story. He creates characters that remain with you and puts them into situations that keep you on the edge of your seat.

As the holidays draw ever closer, I’m always considering whether or not the items I review here would make good gifts and for whom they would make good gifts. Brody’s Ghost strikes me as something that would appeal to manga fans and mystery fans alike. It’s not unlike a C.S.I. procedural if you switch the science for the supernatural. There are clues and they must be followed. Stick with this story. I assure you it will satisfy you and then some. 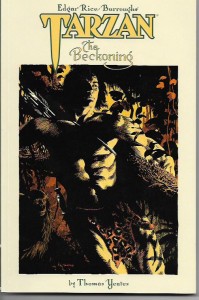 Tarzan is a classic character whose long existence has become more than a little problematic in today’s world. The “white jungle god” notion is often offensive. That Thomas Yates’ Tarzan: the Beckoning [Dark Horse Books; $19.99] avoids that pitfall is a credit to the writer/artist’s talents and sensibilities.

This is a Tarzan who is not the white jungle god of all Africa. He is a confident, powerful man who is more at home in Africa than he is anywhere else in the world. He is a man who moves through Africa with obvious respect for its people, its creatures and its wonders. He does not project himself as any kind of ruler, but as a man who follows the dictates of his conscience and would be a friend to all those of good character.

Yeates is no stranger to classic heroes, having worked on Zorro and Prince Valiant. In this collection of his seven-issue Tarzan series from 1992-93, the immortal hero and his equally immortal wife have been living in America and battling the illegal trade in ivory. Tarzan and the elephants of his African home have long shared an astonishing bond of friendship and, when he discovers the harvested tusks of his brothers, his rage is scarcely controllable. Thus we get an adventure with one foot planted firmly in the modern world of corporate greed and individual malice.

There’s more to the story. We learn how Tarzan and Jane came to be immortal. We see the machinations of a trickster god facing death. We enter a lost civilization. Yeates delivers action, romance and suspense. It’s a thrilling tale.

Tarzan: the Beckoning should be a pleasing gift to fans of Tarzan and his creator Edgar Rice Burroughs. It should also be a terrific gift for fans of Yeates, of which I am definitely one. That’s why it’s the second of this week’s three picks of the week. 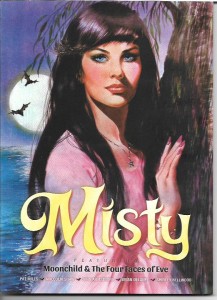 Misty by Pat Mills and others [Rebellion; $19.99] gives us a look at the influential girls horror comic published in the U.K. shortly after the launch of 2000 AD. As Mills relates in his foreword, the girls comics always sold better than the boys comics. As for me, I have always been intrigued by and enjoyed the weekly format of such titles and still hope that, one day, I will get the opportunity to write for one of them.

The Shirley Bellwood cover is a alluring portrait of Misty herself, the host of the weekly. To be the best of my limited knowledge, Misty didn’t star in her own feature but introduced features within the title. The weekly ran for 101 issues from February 4, 1978 to January 12, 1980 before being incorporated into the longer-running Tammy. This sort of merger was common in British weeklies.

This trade paperback collects two serials. “Moonchild” by Mills and John Armstrong tells of Rosemary Black, a girl with strange powers and being raised by a mother driven by her own more earthly demons. Mills says it was inspired by Stephen King’s Carrie, but, compared to that classic work, it’s fairly tame. Still, Mills always comes through with a riveting story and this is no exception.

The book’s second and even better serial is “The Four Faces of Eve” by Malcolm Shaw with art by Brian Delaney. Eve Marshall is a girl with no memory of her past, a past deliberately hidden from her by her parents…and that’s all you’re getting from me because I don’t want to spoil even the slightest of the great twists and turns that await you in this story.

Who would be a good recipient of the gift of Misty? Besides me, who already has his copy? Comics historians curious about the British weeklies leap to mind as do devotees of romance comics, even though neither of these two serials includes a romantic element. It just seems to me like something romance fans would enjoy.

Here’s hoping Rebellion continues to mine the comics libraries they have acquired for more books like this one.