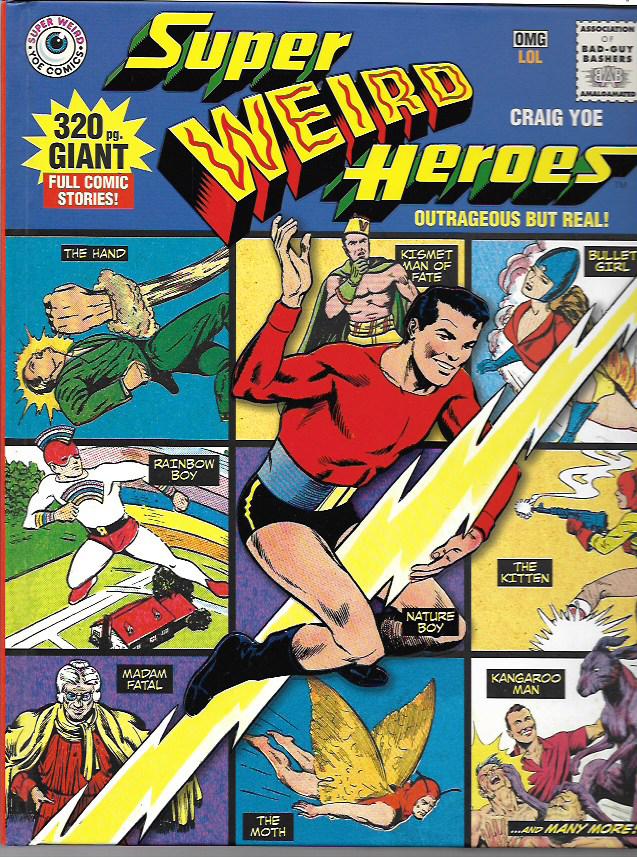 My pick of the week will come as no surprise to readers aware of my manic love for the seriously weird. Craig Yoe’s Super Weird Heroes: Outrageous But Real! [IDW; $39.99] collects over two-dozen comics tales of the 1940s and 1950s starring some of the strangest super-heroes of all time. Where do I begin?

There’s the Hand, who is just that and nothing more, a disembodied hand that can increase its size in its wart against crime. There’s Captain Hadacol, the spokeshero for a muscle-building drink which was at least 12% alcohol. No wonder kids loved it!

Religious heroes are well represented by Kismet, the Man of Fate, who was likely the first Muslim super-hero in comic books, and the Deacon, who wore a priest’s outfit and had a young male sidekick. The famous Madam Fatal was a guy who dressed up like an old lady to beat the bejabbers out of bad guys. Rainbow Boy left a rainbow in his wake as he flew across the sky and could also mold his rainbows into objects. Jerry Siegel’s Nature Boy could request (not really command) the forces of nature to assist him against criminals and usually man-made menaces.

Yoe, who designed and edited this 328-page treasure, kicks things off with a fun, informative introduction. He also write intros for each of his super-hero assemblage. Captain Truth, who looked like a half-naked musketeer. Fantomah, the super-powered goddess whose head turned into a scary skull when he was really ticked off at the evil men she confronted. Kangaroo Man with his kangaroo sidekick. Yellowjacket, who fought crime with bees because he didn’t realize yellowjackets were wasps. Miss Liberty, who never appeared inside a comic book, just as a floating head shot in the logo of Miss Liberty Comics #1 and only.

Super Weird Heroes: Outrageous But Real is enormous fun and would make a suitable gift for anyone who loves comics history, super-heroes or weird stuff in general. I recommend you read two or three stories a day, savoring the insanity without plunging full on into madness.

More goodness. Super Weird Heroes: Preposterous But True! [$39.99], a sequel to this wonderful tome, has already been scheduled for a March 2017 release. I am deliriously happy. 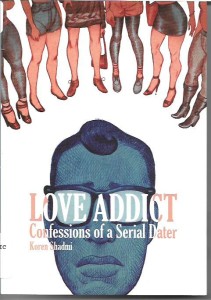 My “skip” of the week is Love Addict: Confessions of a Serial Dater by Koren Shadmi [Top Shelf Productions; $24.99]. I don’t have any major complaints with the art or the dialogue. In service of a much better story, I would be fine with them. It’s the story itself that manages to bore and repulse me simultaneously. I think we need to throw up a warning here…

Whiney animator “K” breaks up with his girlfriend. He turns into a sad sack until his man-slut friend turns him on to hookup service “Lovebug.” The animator starts going on many dates and sleeps with many women. This behavior makes him feel good about himself, except not really. He quickly becomes the sort of person I would avoid at all costs. Because he’s a jerk who thinks with his penis.

“K” sleeps around. He actually meets a terrific woman and dates her exclusively for a couple of months before he breaks up with her on account of he’s not through having random and indiscriminate sex. So indiscriminate that, after a drunken night of unprotected sex, he fears he may have contracted a STD. I would say it would serve him right, but he would have probably spread it with the same lack of maturity he shows throughout this graphic novel.

How bad does “K” become? Bad enough that he comes damn close to forcing himself on an unwilling and vulnerable date. I would have said he crossed the line into criminal behavior, but he suffers no consequences as a result of his behavior. I guess the author’s bar for criminal behavior is set higher than mine.

The final insult? Remember that terrific woman? Though pretty much sheer dumb luck he doesn’t deserve, “K” gets back together with her and the author wants us to believe they live happily ever after or some such. Although with this jerk, I figure his commitment-deficit syndrome will kick in within six months.

The protagonist of Love Addict: Confessions of a Serial Dater is an unlikeable toad. His closest friend is even worse. The women who he dates are a mixed bag, but lose points for using “Lovebug” to hook up with unlikeable toads like the protagonist. Realistic or not – and I suspect there’s more realism to this story than I would want to believe – this is the kind of graphic novel that makes me feel unclean after reading it. In short…not recommended. 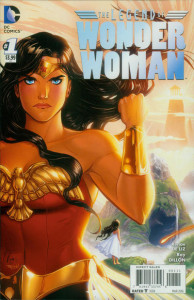 Writer/artist Renae De Liz’s The Legend of Wonder Woman [DC; $3.99 per issue] is an impressive nine-issue re-telling of the Amazon’s origin, restored to its original World War II setting. It’s filled with human drama and otherworldly mythology with enough action to satisfy super-hero fans. But where De Liz shines is with the most human parts of the story.

When Amazon Princess Diana encounters downed pilot Steve Trevor, it is a life-changing moment. Her world suddenly becomes much bigger than the island of Themyscira and her sister warriors. Her entrance into the far more complicated outside world and her somewhat shaky attempts to find her place and meaning in that world are riveting. When Etta Candy comes on the stage, the drama is enlivened with a touch of humor and good old-fashion moxie.

I have no idea if this series fits into the old DC or the New 52 or Rebirth on any other existing take on DC’s super-heroes and I don’t particularly care if it does or not. These nine issues are a most satisfying story on their own. I’ll leave the continuity concerns to others.

De Liz’s writing and art are first-rate. Ray Dillon does everything else – inks, colors, lettering – and does it well. This is a great series that looks great, too. Check it out.

If you prefer to read comics in collected editions, you will have but a short wait for this one. The Legend of Wonder Woman Vol. 1: Origins [$29.99] will be released in hardcover any day now. I think it would be a swell holiday gift for the Wonder Woman in your life.