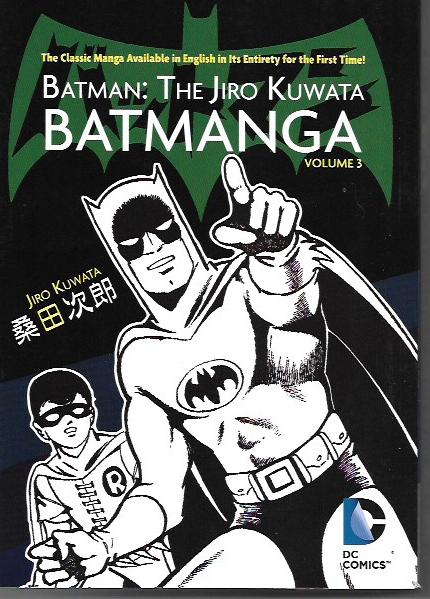 Our first item is something I never thought I’d see as a Batman fan in the 1960s. Indeed, it’s something I never even knew existed in that magical decade. Batman: The Jiro Kuwata Batmanga Volume 3 [DC Comics; $14.99] completes the reprinting of Batman comics stories created and published in Japan in 1966. The three volumes mark the first time all 18 of these stories have been presented in English. My sense of wonder was tingling from the moment I learned of these collections.

The started point for Kuwata’s interpretations of Batman, a global television sensation in the 1960s, were comics stories originally published in the United States. These stories were written by such renowned American writers as Gardner Fox and Robert Kanigher with art by Carmine Infantino, Sheldon Moldoff and Joe Giella. Kuwata then re-imagined and retold them in manga style for magazines like Shonen King and Shonen Gabo. Some tales are instantly recognizable to me and others not so much.

Readers will find a Batman and Robin who appear willing to kill in self-defense or who are, at least, indifferent to the deaths of the villains. Batman even uses a gun in one story. With one exception – “Ghost Batman” based on a story by Fox, Moldoff and Giella – the seven stories in this final volume predate the editorial reign of the legendary Julius Schwartz. One – “Robot Robbers” by Bill Finger and Charles Paris – dates back to 1947. Japanese takes on villains Planet Master, Clayface and Catman are among the foes faced by the Caped Crusaders.

If one can be nostalgic for stories one has never read before, that is what these Kuwata Bat-interpretations do for me. I am fascinated by their other-ness while remembering fondly the simpler and less complex Batman of my youth. I have no problem with a more grim and gritty Batman when today’s writers keep him firmly sane, but those old stories have a charm and a quality of their own. It’s nice to know they traveled overseas so successfully.

I recommended the Batman: The Jiro Kuwata Batmanga volumes for all kinds of readers. Avid Batman and manga fans will enjoy them. Those readers just dipping their toes into manga will find them a decent enough stepping stones to the entirely Japanese manga. Students of comics history will likely be as fascinated by them as I am. And with the holidays coming, these books would be great and relatively inexpensive gifts for the Batman or comics fan in your life. I know I had a terrific time with them. 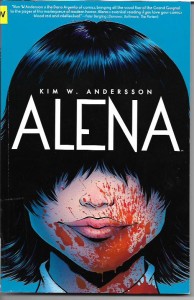 Kim W. Anderson’s Alena [Dark Horse Comics; $17.99] is your basic slasher movie in comics form. It’s the English language edition of an award-winning Swedish graphic novel that has also been made into a movie. Lifted from the back cover blurb:

“Alena’s life is a living hell. Since starting at the snobbish boarding school Alena’s been harassed every day by Philippa and the girls on the lacrosse team. But Alena’s best friend Josephine is not going to accept that anymore-not from the counselor or principal, not from Philippa, and not from anyone at that horrid school. If Alena does not fight back then Josephine will take matters into her own hands. There’s just one problem: Josephine has been dead for a year.”

I came to my appreciation of (some) slasher movies later in life as I watched the multiple additions to such franchises as Halloween, Friday the 13th and Sleepaway Camp. This graphic novel embraces the genre and, though, such things aren’t always part and parcel of the genre, is well written with truthful characters, mounting suspense and a satisfying (if somewhat predictable) ending. I don’t know if I’d considered it award-worthy, but it was pleasant entertainment, not unlike the often cheesy horror and monster movies I enjoy. In a world of many disappointments in many areas, sometimes “good” is enough to make a book or movie worthwhile. Not everything has to be great to be entertaining.

This edition of Alena also features information and photos from the movie. It’s a book that would make a good gift for a fan of either European graphic novels or slasher movies. 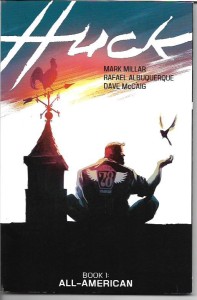 My pick of the week is Huck Book One: All-American by Mark Millar with artist/co-creator Rafael Albuquerque and colorist Dave McCaig [Image; $14.99]. If I had to describe it in a sound byte, I’d call it “the feel-good super-hero book of 2016.”

Huck is a gas station attendant in a small town. He has incredible powers and uses them too secretly perform a good deed every day of his life. It’s his way of honoring his mother and the townspeople who have taken him in and shown him nothing but love and kindness. Oh, and about that “secretly perform” thing, let’s just say small-town people aren’t stupid. They know what Huck can do and does, and they respect his privacy. This 160-page book really gets going when Huck’s secret is exposed to the world and he faces the consequences of that revelation.

If you’ve got an ounce of super-hero love in you, you’re going to love Huck. He’s a great character and, despite his similarity to an iconic comics character or two, he has a freshness about him that made me smile. With outstanding writing and art, Huck would be one of the best gifts you could give a friend or family member in this coming holiday season. They don’t even have to be a comics reader. They will enjoy this book.