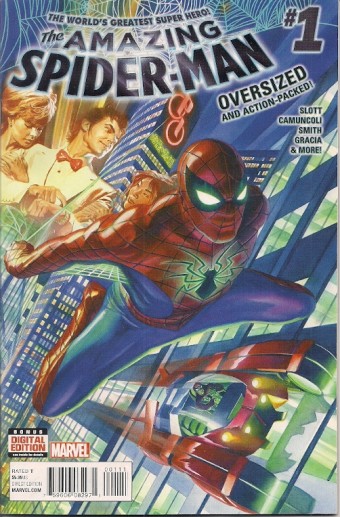 Since the final issues of Secret Wars have not yet shipped, putting aside the question of how does a publisher allow that to happen, I can only speculate on the state of the Marvel Universe in the wake of that event. The new first issues from Marvel seem to take place several months after Secret Wars. The multiverse seems to have been restored to some extent, but some parallel universes didn’t survive the event. Some characters seem to be back on their own versions of Earth and others now live on whatever Marvel is calling their main universe. This deep thinking makes my brain hurt.

Known through the multiverse for my fairness and generosity, I am approaching these relaunched Marvel titles with a mind so open you can see electricity flashing across my cerebral cortex. I started my new Marvel experience with five Spider-Man titles. Peter Parker has always been one of my favorite comics characters, so I thought The Amazing Spider-Man #1-3 would be a good place to begin.

In the months between the end of Secret Wars and now, Peter Parker has become Tony Stark. Parker Industries is a vast operation that creates and deals cutting-edge technology. Spider-Man is Parker’s bodyguard. On first hearing of this new situation, I was skeptical. Then I remembered writer Dan Slott has pulled off some outrageous Spidey storylines in the past and that I found those stories both entertaining and intriguing.

Parker hasn’t abandoned his core “great power/great responsibility” philosophy. He’s taken it global. He’s a nicer Tony Stark than we have seen in the comic books of late. I especially liked his buying the Baxter Building for his New York headquarters, keeping it safe for the eventual return of the Fantastic Four and, in the meantime, honoring that super-team’s service.

The oversized first issue has a long lead story that foreshadows a number of future stories. Artists Giuseppe Camuncoli (pencils), Cam Smith (inks) and Marte Gracia (colors) do a fine job on the visual end of that tale. The characters are easily recognizable. The art is dynamic where it needs to be dynamic. The storytelling is clear and dramatic. In addition to the lead story, this new first issue presents vignettes that lead into related titles Spider-Man 2099, Silk, Spider-Woman and Web-Warriors.

I liked The Amazing Spider-Man #1-3 quite a bit. If you’re willing to accept this new situation, I think you’ll enjoy these issues as well. I recommend giving them a chance.

Spider-Gwen #1-2 are set in a parallel universe where it was Gwen Stacy who got bit by a radioactive spider. Trying to be special, Peter Parker became the Lizard and allegedly died. The authorities blame “Spider-Woman” for that alleged death. Detective George Stacy knows his daughter’s secret and has suffered professionally for his failure to apprehended her costumed identity. Captain Frank Castle has now taken charge of that case.

Spider-Gwen is a very popular character. Written by Jason Latour with art by Robin Rodriguez and color by Rico Renzi, her previous appearance are sought after and this new title looks to be at least a modest success. However, it’s not clicking with me. It feels like an issue of What If? extended unnaturally into an ongoing series. The writing and art are good enough, but the premise just doesn’t appeal to me. As Don Thompson used to say in his reviews for Comics Buyer’s Guide, “If you like this sort of thing, you’ll like this.” 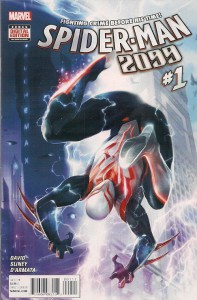 In Spider-Man 2009 #1-3, Miguel O’Hara is living in our time hoping to find and prevent the event that created a temporal distortion in his future world. He thought he’d achieved that, but he was wrong. He keeps searching for answers while working for Peter Parker and hoping he will find a way to return home that doesn’t screw up the timeline even worse. He was a holographic assistant named Lyla and I just realized this is all sounding just a little bit like Quantum Leap. Lyla is pretty cool, though.

Peter David has successfully combined the expected super-hero with a just-right dose of current events (terrorism) and soap opera (a girlfriend he thinks is dead and that girlfriend’s scheming mother who is trying to keep him thinking that). Artist Will Sliney with color artist Frank D’Armata do a solid job on the visuals. This is a good series. After The Amazing Spider-Man, it’d be my favorite of the Spider Family titles if it weren’t for the next title I’ll be writing about here. 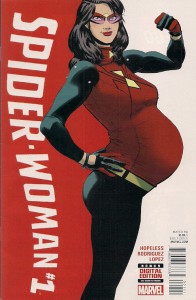 Spider-Woman #1 found Jessica Drew still working with ace reporter Ben Urich and Roger Gocking aka the Porcupine, a former villain now a good guy. As Spider-Woman, Drew’s been a member of the Avengers and a government super-spy. Now she and her small team help people. Simple as that. They help people. Oh, yeah, and Drew is pregnant. Really pregnant. It appears at least two Marvel characters had some sexy fun times in the aftermath of Secret Wars, though the identity of the father hasn’t yet been revealed. I’m hoping for Razorback or the Rocket Racer because I miss them.

The writer of this first issue is Dennis Hopeless, whose work here is outstanding. I also liked the art by Javier Rodriguez (pencils and colors) and Alvaro Lopez (inks). If subsequent issues prove to be as excellent as this one, Spider-Woman will be in my top four or five Marvel titles. This title deserves your attention.

Then there’s Web Warriors, which unites spider-heroes from several alternate realities with a mission statement to protect the Spider-Verse. The roster includes Mayday Parker, daughter of Peter Parker and Mary Jane Watson; Bill Braddock, a member of a Captain Britain corps from a destroyed universe; Pavitir Prabhakar, a poor kid from the Mumbai of yet another universe; Peter Porker, the spectacular Spider-Ham; Spider-Gwen and others. It’s an offbeat super-team that I found entertaining when a version of it was shown on the Ultimate Spider-Man cartoon series. It’s an intriguing event-type gathering that could make for the very occasional special. However, I’m not convinced it has the legs for an ongoing series.

Issue #1 set the stage for the series. Written by Mike Costa with artists Dave Baldeon (pencils), Scott Hanna (inks) and Jason Kieth (colors), it was readable but not engaging. The debut story ends on a cliffhanger: the revelation of a super-villain group consisting of multiple versions of a long-time Spider-Man foe. I’m really not feeling it here.

Backing up the lead are a tale featuring the steampunk Lady Spider of Earth-803 and a helpful double-page spread that offers a quick summation of who these various spider-heroes are. The spread saved me a trip to Wikipedia.

I’ve no doubt some readers will love this gathering of spiders and the emphasis on alternate realities. As for me, I’m not bailing on Web Warriors after one issue. I’ll stick around to see what happens next.

Here’s wishing you a merry Christmas, my friends. I’ll be back next week with more reviews.