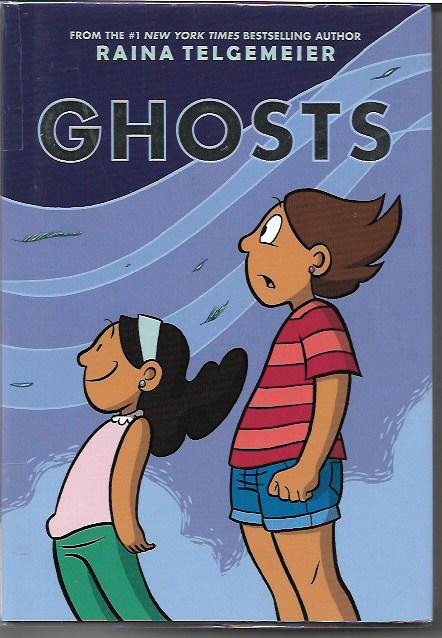 I pity the next batch of Eisner Awards judges. Lately, it seems as if a new award-deserving comic book or comics collection or graphic novel is crossing my path on a weekly basis. If i weren’t so busy, I could happily retire to a life of reading one great comics work after another.

Raina Telgemeier’s Ghosts [GRAPHIX; $24.99 in hardcover, $10.99 in softcover] is a sure contender for the next round of comics awards. Teenager Catrina and her family move to Bahia de la Luna, a small town on the Northern California coast. They make the move because the climate with be better for Maya, Catrina’s little sister, who has cystic fibrosis. It is a friendly town that cherishes its past and its past relationships. Because Bahia de la Luna is also home to ghosts. Lots of ghosts.

There are so many terrific elements in this 256-page graphic novel. Sisters Catrina and Maya are very real, both in their love for one another and Catrina’s desire to have a life of her. The town itself is a character with its often spooky atmosphere moving the story to its hopeful and satisfying conclusion. The ghost tour and the Day of the Dead are both magical and scary. The supporting characters are supportive in the lives of the sisters. Midway through Ghosts, I was thinking how wonderful it would be to spend a few weeks or a retirement in Bahia de la Luna.

Telgemeier is a masterful storyteller. Her storytelling and story flow are impeccable, carrying the reader through the real world and the fantastic world with equal skill. Her characters are animated and the dialogue that comes from them always rings true. Colorist Braden Lamb adds vibrancy to an already vibrant story.

Kudos to Telgemeier. Ghosts is my pick of the week. 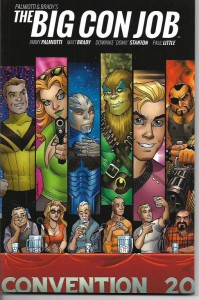 The Big Con Job by writers Jimmy Palmiotti and Matt Brady with art by Dominike “Domo” Stanton and colors by Paul Little (Boom Studios; ($19.99] is a fun concept that loses points in its execution. The setting is the convention circuit and the protagonists are “flabby action heroes, sex symbols and sci-fi bit players” eking out their increasingly smaller living at those conventions. Though all of the characters in this graphic novel are original creations, we’ve all seen them at various conventions.

The C-lost celebrities are recruited into a scheme to rob the Sam Diego Comic-Con. Yep, this is a caper story and the stakes are the millions in dollars the convention holds for dealers and autograph agents. I suspect more than a few dealers and autograph agents are not going to see the humor in this story. Me, I’m of the mind that entertaining stories can be told starring very good people and very bad people and all the people in between those extremes.

Over the years, I’ve gotten to know and even work with some of the celebrities channeled for The Big Con Job, and even more comic-book artists and writers in much the same circumstances. I’m sympathetic to these characters, even recognizing how many things can go wrong with a scheme like this. Indeed, that’s one of the attractions of a good heist story.

In The Big Con Job, the writing and the art are good. There are a few places where I think more character or plot development would have made the graphic novel better. Overall, though, I had a good time with this story and I think you will, too. 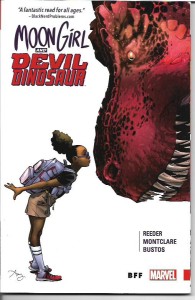 One of the reasons I read as many comics collections and graphic novels as I do is because I can get them through my library system. Another is because I have a generous friend who loans me his comic books after he reads them. This friend reads a lot of comic, but he doesn’t get everything. So Moon Girl and Devil Dinosaur flew under my radar for a long spell. Until the first trade paperback of the series became available through my library.

Moon Girl and Devil Dinosaur Vol. 1: BFF by writers Amy Reeder and Brandon Montclare with art by Natacha Bustos and colors by Tamra Bonvillain [Marvel; $17.99] collects the first six issues of this very cool, very fun series. Moon Girl is Lunella Lafayette. She’s a preteen genius who is one of the smartest people – and maybe even the smartest person – in the Marvel Universe. As someone who does not really fit into the normal world, she’s terrified the Inhuman gene inside her will change her into something that’s even more at odds with that normal world. That fear is an amazing notion I have not seen articulated as well in any other Marvel title.

Devil Dinosaur is, of course, the clever saurian created by Jack Kirby in the 1970s. Devil has stuck around the Marvel Universe for decades and, when last seen, was having adventures with Moon Boy in the Savage Land. These names will mean nothing to readers who are not familiar with their Marvel Comics mythos, but, trust me, every one of those names from Devil to Savage Land says “Marvel magic” to us long-time Marvel afficinados.

Devil ends up in Mew York City, pursed by the caveman-like Killer Folk and taking a liking to Lunella. They have adventures, meet the odd Marvel hero, and protect one another. A girl and her dinosaur. How could I not love this well-written, beautifully-drawn series?

Though this volume ends on a cliffhanger, it delivers a satisfying chunk of excellent reading that has me eager for the next volume in the series. Suitable for all ages, I recommend this spiffy series to readers of all ages.