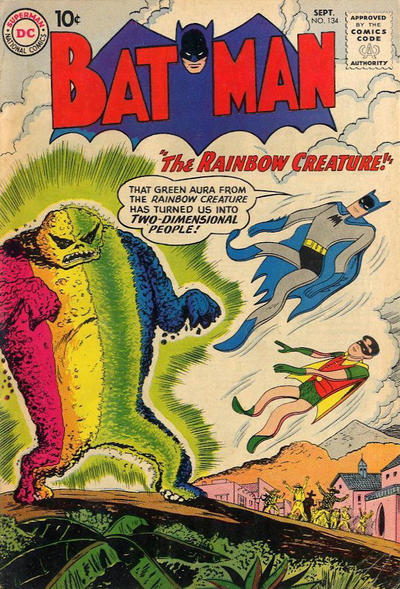 You would think I would be satisfied. I mean, we live in a comics world where classic and not-so-classic comic books of the past are collected into nice hardcover and softcover volumes. It’s a world where reprints of classic newspaper comic strips are also readily available. Don’t even get me started on the collections of current comic-book stories, the original graphic novels from all over the world and in every genre imaginable, the amazing manga that comes to us from Japan. This, as I have said so often, is the true Golden Age of Comics. And yet…I want more!

About once a year, I throw together a list of comics collections I would dearly love to read and own. These books represent money in the bank – my money – to whoever publishes them.

This year’s list came to me during a restless night. I wasn’t able to sleep. I keep thinking of collections I wanted. I grabbed a pen and a notepad and started writing them down. Most of them are new to this list. Some have appeared before, but, since they came to me during those small hours between sleep and full awakening, I figure the universe wants me to include them again.

In the order they came to me…

DC’S DANGEROUS CREATURES. See what I did there? With the title that has the same initials as DC Comics? This would be a collection of the creature stories that appeared in just about every DC title of the 1950s and 1960s, save for maybe Young Romance. Batman and Robin versus the Rainbow Creature. The Faceless Creature who appeared in a couple of Strange Adventures stories. Superman tangling with Titano the Super-Ape. The Challengers of the Unknown being put on the hot seat by the Volcano Men.

MARVELOUS MONSTERS OMNIBUS. I want every pre-Fantastic Four giant monster thriller collected in hardcover. Fin Fang Foom. Groot. The Colossus. Grottu. Goom and Googam. All of them because I was and I remain a monster-loving kid.

COSMO THE MERRY MARTIAN. This short-lived Archie Comics title only lasted six issues, but it left an indelible imprint on the brain of a young Tony Isabella. Created by Bob White, it featured a planet-hopping Martian and his pals from all around our solar system. It was clever and imaginative. Though I own all the original issues, I feel this series should be preserved for the ages. I also feel I should be hired to write new Cosmo stories, but who listens to me?

THE BARKER. Created by writer Joe Millard and artist Jack Cole, and continued by the great Klaus Nordling, this feature starred Carnie Callahan, the barker for Colonel Lane’s Mammoth Circus. Carnie and his supporting cast of colorful carnival folks made their debut in Quality’s National Comics #42 [May 1944}. Their amusing adventures appeared in that title for years and also in the fifteen-issue run of The Barker. I love these stories and, even though almost all of them are public domain and available online, I would still love to have actual books of them.

CANDY was Quality’s star performer in the teen humor genre. Created by Harry Sahle, Candy was an all-American small town girl who had a regular feature in Police Comics, her own long-running title and her even longer running newspaper strip. I think she held her own with Archie and Patsy Walker.

KATHY by Stan Lee and Stan Goldberg. The “teen-age tornado” ran for 27 issues between October 1959 and February 1964. It was Goldberg’s first major assignment and he did amazing work on it. Lee’s scripts were a little corny, but still very funny. I collect Kathy, though good condition copies are tough to come by at prices I can afford. I’d miss a few meals to have all these Lee/Goldberg gems gathered into two or three trade paperbacks.

THE BEST OF MILLIE THE MODEL and THE BEST OF PATSY WALKER. We will likely never see Marvel Masterworks volumes of these classic comics heroines. Maybe if I ask Marvel real nice, the company will publish anthologies that present the best of these characters from all over their long and successful careers.

THE BEST OF LARRY LIEBER’S RAWHIDE KID. I love the Lee/Kirby/Lieber version of this classic western hero. The Lee and Kirby issues have all been reprinted, but almost none of Larry’s decade-long run on the character. A “best of” volume is long overdue.

Looking at DC Comics again, THE BEST OF THE ADVENTURES OF BOB HOPE and THE BEST OF THE ADVENTURES OF JERRY LEWIS have long been on my wish list of reprint collections I’d love to see. Both featured an amazing array of great artists and writers. Jerry’s title even had several crossovers with DC super-heroes like Batman, Superman and Wonder Woman. I suspect the rights situation might be complicated. However, knowing that both Lewis and the Hope estate are involved in all sorts of charities, I bet something could be worked out that would benefit the charities and introduce a new generation of fans to some terrific comics stories. 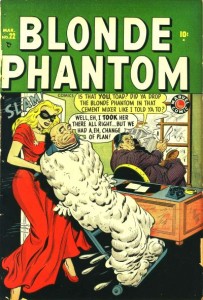 THE BLONDE PHANTOM. My favorite evening gown-wearing super-heroine. My standing joke is that the Blonde Phantom did everything the male heroes did, but backwards and in heels. I can’t explain why she had such appeal for me, but she does. If Marvel reprints her comic, they have a guaranteed buyer in me. 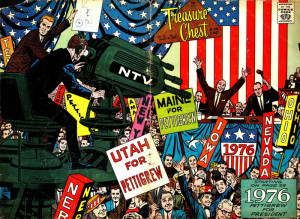 THE BEST OF TREASURE CHEST. This was a Catholic-oriented comic book distributed in Catholic schools from 1946 to 1972. It was created by publisher George A. Pflaum of Dayton, Ohio. I had a subscription to Treasure Chest during my years at Sts. Philip and James School on the west side of Cleveland, Ohio.

My parents and the nuns who taught me loved Treasure Chest because it always ran comics stories about saints and such. But, for me and most kids, the attractions were the adventure and historical and even speculative history serials. These were often drawn by great artists like Frank Borth, Reed Crandall, Dick Giordano, Joe Sinnott and others. My all-time favorite was “Pettigrew for President,” a serial about the race to become the Presidential candidate for that high office. In addition to the saints and serials, Treasure Chest also had gag strips, puzzle pages, craft pages and more. It was a fine comic book and remains a favorite of mine.

Almost all of Treasure Chest is available online for free. Greedy old Tony would like a series of “best of” collections as well. We should draw much attention to the really excellent comics than ran in Treasure Chest and give them much-deserved praise.

ARCHIE HEROES OF THE SWINGING SIXTIES. They were corny and a pale imitation of what Stan Lee, Jack Kirby and others were doing over at Marvel Comics. But I have a soft spot in my heart for the goofy adventures of Fly-Man, the Mighty Crusaders, Steel Serling, the Web and the rest of the crazy super-heroes published by Archie Comics at the height of the Batman on TV craze.

Modesty forbids me from mentioning that I would also like to see at least two more volumes of BLACK LIGHTNING, the Isabella and Richard Howell THE SHADOW WAR OF HAWKMAN, and THE COMPLETE IT! THE LIVING COLOSSUS. Modesty becomes me, don’t you think?

I’ll be back next week with the usual reviews of comic books, books and anything else that tickles my fancy. See you then.