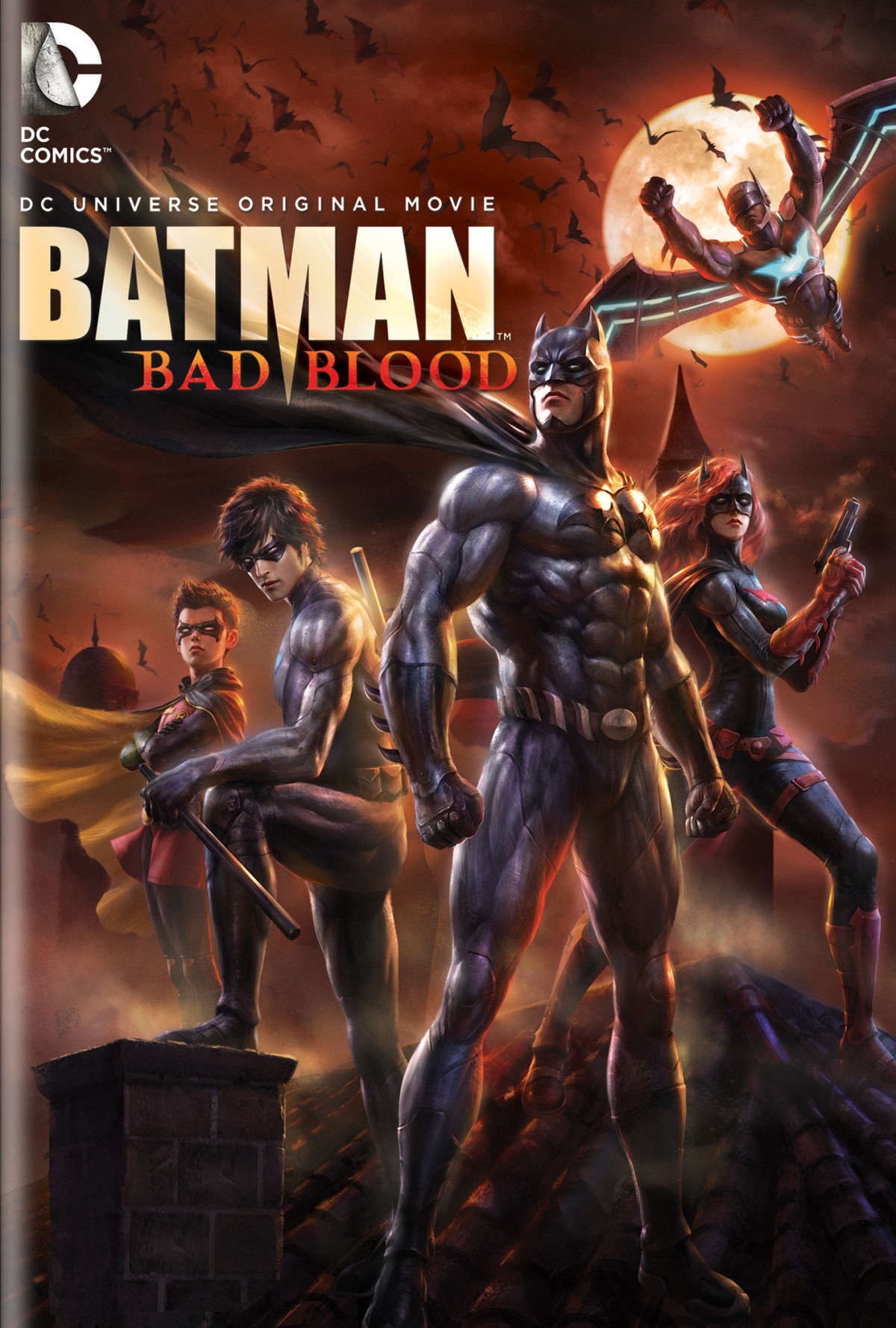 One of my goals for the rest of this year is to catch up on all of the DC Comics movies, TV shows and animated features. My viewing of these will be erratic because I haven’t yet found the chronological listing – if such a list exists – that would allow me to exercise my OCD and watch them in order of release. Some whose own OCD takes a more active form than mine should prepare such a list and send it to me. Believe me, I would herald that individual’s greatness in a future installment of this column.

Batman: Bad Blood [Warner Bros. Animation/DC Comics; approximately $13] came to me through my local library. The 2016 direct-to-video release was directed by Jay Oliva who’s helmed many other animated features and worked as a storyboard artist on various live-action films. He’s got chops. It was written by J.M. DeMatteis, writer of countless comic books as well as many episodes of both animated and live-action. Okay, you probably could count all the comic books he has written, but you’d be counting for two or three days.

The bare bones Internet Movie Database summary of the feature goes exactly like this:

Bruce Wayne is missing. Alfred covers for him while Nightwing and Robin patrol Gotham City in his stead. And a new player, Batwoman, investigates Batman’s disappearance.

That summary is close enough for government work, but leaves out a number of salient points. The feature includes the origins of both Batwoman and Batwing with a teaser shot of another hero at the end of the film. It also has somewhere in the neighborhood of a dozen super-villains, including the Electrocutioner, Tusk, Firefly, the Mad Hatter, the Calculator, Killer Moth and more. I’m hoping that a whole bunch of comics writers and artists got some money for the appearances of their creations.

The voice actors include Jason O’Mara as Batman, Yvonne Strahovski as Batwoman, Stuart Allan doing a darn fine job as Damian Wayne, Morena Baccarin, John DiMaggio, Robin Atkin Downes, Ernie Hudson (who I really want to work with some day because he’s my favorite Ghostbuster) and others. There is nary a false note among all these talented performers.

Wanting to avoid spoilers, all I’ll say about Batman: Bad Blood is that I enjoyed it. It threw some surprises at me. It had some real character growth. I’m adding it to my Amazon Wish List because I’d like to watch it again sometime and share it with others. It’s my pick of the week. 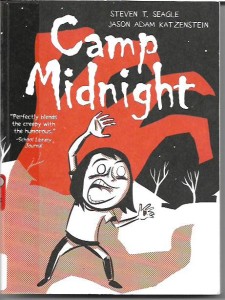 Camp Midnight by Steven T. Seagle and artist Jason Adam Katzenstein [Image Comics; $16.99] is the creepy, funny and ultimately moving story of what a young girl named Skye did on her summer vacation. Her parents are divorced, her dad’s new wife doesn’t seem to like her and she just got on the wrong bus for summer camp. Which takes her to a camp where activities don’t start until midnight and where all the other kids are monsters. Chalk up a win for Free Comic Book Day because it was the free excerpt of this graphic novel that got me to seek out the full edition.

Skye’s afraid to let the other campers know she’s an ordinary human being. Mia, the first friend Skye makes at the camp, doesn’t want anyone to know what she really is. So, alongside the creepy stuff and the funny stuff, we also get some not-remotely-preachy lessons about being yourself and standing up for yourself. The targeted age range for this book is 9-12, but it’s smart enough to be enjoyed my older readers. Even dinosaurs like me.

Seagle’s writing is sharp and his characters come alive in dialogue that never “sounds” wrong to me. Katzenstein’s art – his cartoons have appeared in Newsweek and The New Yorker – isn’t typical comics stuff, but it flows nicely and tells the story well. This could be a contender for next year’s awards.

I like Camp Midnight a lot. It should be in every public and school library that wants to build a graphic novel collection for readers of all ages. It would be a terrific gift for younger readers and, for that matter, older ones. Definitely recommended. 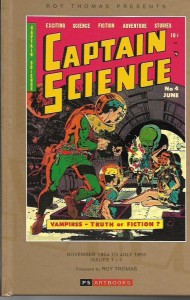 Roy Thomas Presents Captain Science [$69.99] is the latest vintage comics collection from the UK’s PS Artbooks. Originally published by Youthful Magazines, the volume reprints all seven issues of the title from November 1954 to July 1955.

Captain Science is a brilliant scientist who is given the advanced scientific knowledge of a dying race and an electronic brain that can alert him to any threat to our world. He’s joined in this fight by the young, very rich Rip Gary and the lovely Luana, who turned against her evil father to help the good Captain save our planet. It’s a fairly typical group of heroes with the somewhat troubling sidebar that Rip was mentally conditioned by an alien to devote his wealth to the service of Captain Science.

Each issue has two stories of the Captain and two other stories. An interplanetary detective named Brant Craig appears in most issues. Captain Science’s villains are evil alien conquerors and the gooey monsters who love them. Brant mostly brings criminals to justice. As for the non-series stories, they are often the best story in an issue. Some notable examples: “When Time Stood Still,” “The Glower of Death,” “The Hangman’s Son,” and the amazing “World War III with the Ants.” That last one could and should be expanded into a full-length graphic album, a novel or even a movie.

The writers of these comic books have not yet been identified, but the artist roster includes Wally Wood, Walter Johnson, Don Perlin, Gustav Schrotter, Joe Orlando, Myron Fass and Harry Harrison. The book also features a foreword by editor Thomas.

With issue #8, the name of the title changed to Fantastic. The last two Captain Science stories and the last Brant Craig adventure ran in that issue, but are not included in this hardcover. Fantastic ended with issue #9, which had four non-series anthology stories. I’m hoping PS Artbooks reprints those two issues of Fantastic in a near-future collection.

You know the drill on these PS Artbooks volumes. Though all of the reprinted comic books might not be classic, the books are wonderful additions to our comics library. In this case, fans of Wally Wood and Joe Orlando will want the bool for their artwork.

Captain Science was good fun. On that basis, along with the afore-mentioned historical value, I recommend it.