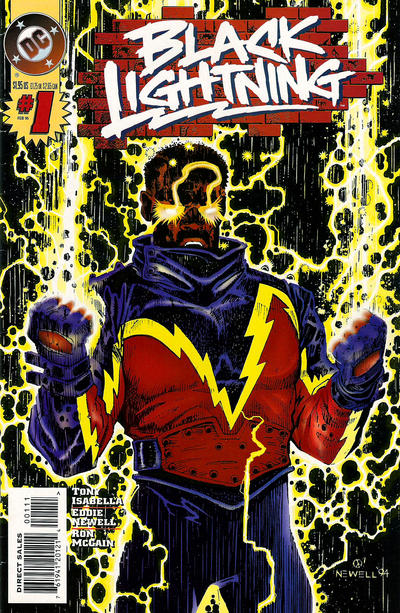 Black Lightning. Before we get to this week’s reviews, I should say a few words to the three or four comics fans who somehow have not seen the latest news about the character I created for DC Comics. I’ll try to keep these remarks brief because, even at 65 years of age, I think people should try new things.

DC Entertainment has received a pilot commitment from Fox on Black Lightning. This means – and I hope I have this right – DC will be making a pilot for a Black Lightning TV series. If Fox loves this pilot, Black Lightning will get his show. This commitment is due to the hard work of Greg Berlanti, show runners Mara and Salim Akil, and Geoff Johns, who is a hero to the Isabella family.

I’ve spoken with Mara and Salim. We got along famously. Their take on Black Lightning is well within what I consider the core values of my creation. I’m excited about their plans.

For reasons that should be obvious to those of you have been around this rodeo for a few years, I’m not going to be able to say a lot about the show going forward. Or about other Black Lightning stuff. I’ll tell you what I can when I can. For example:

There will be more Black Lightning announcements coming. I believe you will like them as much as I do.

And now, this week’s reviews… 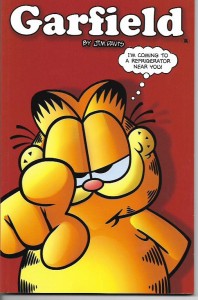 For several years now, KaBoom!, a division of Boom Entertainment, has been publishing original Garfield comic books based on the Jim Davis comic strip that is a favorite around the world and here at Casa Isabella. Don and Maggie Thompson introduced me to Garfield way back in 1980 when Ballantine Books published the first of over 60 collections of the strip. I loved the format of the book and I loved the strip itself. Garfield has been a daily part of my life ever since.

I prefer my Garfield comic books like Garfield prefers his lasagna: in big delicious chunks. Garfield Volume Four [July 2014; $13.99] was my latest mirthful meal. It collects material from Garfield Pet Force Special #1 and Garfield #13-16. The stories are written by Mark Evanier, who is one of my favorite writers and oldest friends, and Scott Nickel, whose comic strip Eek! is also a favorite of your friendly neighborhood tipster. Art is by Gary Barker with Mark and Stephanie Heike, Andy Hirsch, Courtney Bernard and Genevieve Ft. As I will be saying many nice things about Evanier, let me assure you my reviews aren’t influenced by my friendships for those whose work I write about. Mark has never once paid me to say nice things about him. He has me on a retainer. Drum roll.

“Pet Force” cats Garfield, Odie, Nermal and Arlene as super-heroes. In a story by Nickel, the team is disbanded under the influence of the emotion-controlling Hater. In a second story by Evanier, based somewhat on his experiences with shady contractors, the team faces a cosmic, world-destroying contractor. These tales are a very funny parody of super-hero comics.

But it’s the purer Garfield stories I love best, the stories that, despite starring a sentient cat, deal with real-life things like diets, cranky neighbors, lateness, self-esteem, inflated ego, cut-throat business competition and such. Evanier has a knack for this kind of story and his artists do fine work visualizing them.

Garfield Volume 4 is my pick of the week. Not only was it big fun to kick back and enjoy it from cover to cover, but it featured the kind of comics I read a second time to study how Evanier and crew made the stories work. The entire KaBoom! Garfield series gets my highest recommendation. 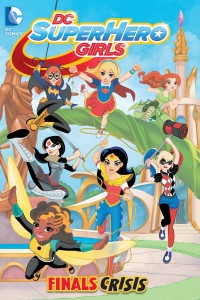 DC Super Hero Girls: Finals Crisis [$9.99] by Shea Fontana with art by Yancey Labat is a 128-page, 6″ by 9″ original graphic novel for readers 8-12 years old. It’s based on the animated series that has been an online sensation since it first launched.

In this corner of the DC Multiverse, Super Hero High is where the teen versions of heroes and villains go to learn how to use their abilities effectively. The principal is Amanda Waller with Gorilla Grodd as her vice-president. The main characters include Supergirl, Wonder Woman, Bumblebee, Batgirl, Harley Quinn, Poison Ivy, Katana and others. It’s an amusing concept that can be enjoyed by younger and older readers alike.

That said, I was disappointed in this particular adventure. While preparing for their finals, the young heroines are kidnapped, one by one, by a mysterious villain whose identity will not fool comic-book readers in the least. The girls defeat this villain by working together, a sweet little moral that ignores the fact that, even at this early stage in their training, every one of these young women should have been able to beat the bad guy by themselves. The moral drove the story and that hurt the story.

DC Super Hero Girls is worth checking out. Even a flawed book like this one, it still entertaining. 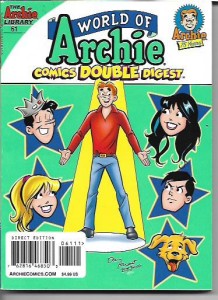 World of Archie Double Digest #61 [$4.99] is the new issue of the only Archie Comics title I still collect. I read a few of Archie’s standard-size comics like Archie, Jughead and The Black Hood, but the company just doesn’t speak to me as it did for so many years. No pun intended, the vileness that is Afterlife with Archie was the final nail in that particular coffin.

When I say I collect World of Archie Double Digest, that’s exactly what I mean. I have all 61 issues. I started collecting it because it was reprinting classic comics like Cosmo the Merry Martian and the pre-Pussycats Josie. It threw in some oddball stuff like Young Dr. Masters and Seymour, My Son. I kept collecting it even after it ran out of that material because it was still reprinting fun stuff by writers Frank Doyle and George Gladir – my two favorite Archie writers – and great artists like Dan DeCarlo, Stan Goldberg, Harry Lucey and others.

The title has seen better days, but it still has enough of the good stuff to keep me buying.

The high points this time out are the second chapter of a spy spoof by Tom DeFalco, a fun “Reggie gets his comeuppance” story written and drawn by Al Hartley, the usual fun scripts by Doyle and Gladir, and an “Archie 1″ tale – the Riverdale kids in prehistoric times – that ends on a pun that made me groan in delight. In the past, I’ve recommended classic Archie comic books as a terrific change of pace from the grim and grittiness of so many super-hero comics. I still think World of Archie Double Digest works in that regard. Check it out sometime, especially if you can get hold of one of the earlier issues.