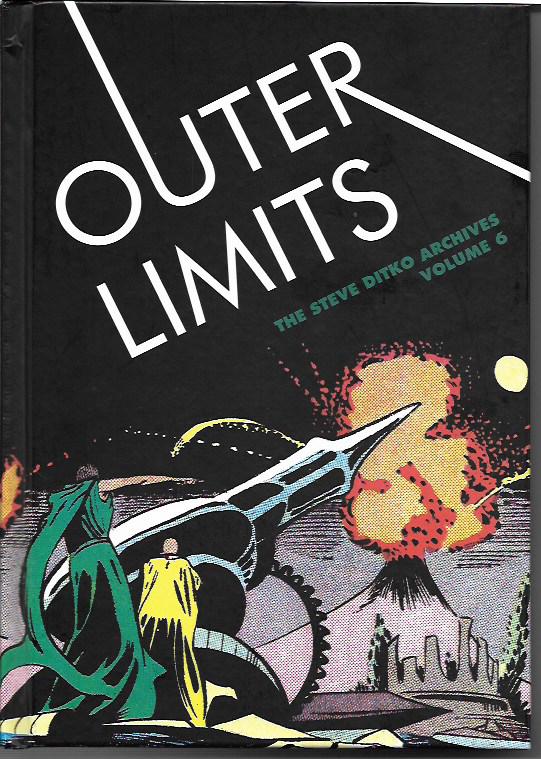 First up today is the frankly disappointing Outer Limits: The Steve Ditko Archives Volume 6 [Fantagraphics; $39.99]. The hardcover book collects 38 Ditko-drawn stories that were originally published by Charlton comic books dated 1958 and 1959. My disappointment doesn’t lie with the volume itself, but rather with the substandard stories presented therein.

Blake Bell’s introduction is informative, but his critical praise of Ditko’s work on these stories strikes me as excessive. But his historical insights and his inclusion of pages Ditko drew when he once again started getting work at Marvel helps put these stories in context.

Ditko rarely seems inspired by the stories reprinted here and that shows in his mostly journeyman art on them. It’s also quite likely Charlton’s notoriously low rates played a factor. Sometimes, then and now, the art of the comics art form takes a back seat to more mundane financial considerations.

There are, as you would expect, flashes of Ditko brilliance. “The Time Chamber” has a large final panel “shot” through a window and it’s stunning. Even some of the more minimalist art has a certain cleverness in Ditko’s execution of the drab stories he was given to illustrate.  Given how poorly written and often wildly unfocused the stories are, I’m not about to fault Ditko for not doing more with them. The story comes first and, if that’s not there, even if the art looks great, the story still falls flat. Great comics have both great stories and great art.

Some of the best writing and art in this volume is in the stories starring Black Fury. The mighty steed belongs to Rocky Lane, cowboy star of many movies and TV shows. Apparently, horse and man have a long-distance relationship. Lane himself only appears in one of the Black Fury stories. In any case…

Ditko seems somewhat energized by these western assignments. Though I can’t speak to the accurate of the horse anatomy, there is both beauty and power in Ditko’s depictions of Black Fury. The stories are also better written than most of the sci-fi efforts included in this volume.

The back cover blurb claims the sci-fi stories “tapped into Middle America’s fears and aspirations during the 1950s Cold War era and the beginning of the space race with Soviet Russia.” This is a bit of an exaggeration, but worth discussing. While the volume has some of the knee-jerk jingoism that would become more common at Charlton and other publishers during the 1960s, there are also stories which clearly oppose aggression from both the United States and Russia, or their otherworldly counterparts. That nuance would fade from the Charlton comics in the 1960s.

The bottom line is that Ditko is one of the most important creators to have worked in comic books. My disappointment in these reprinted efforts doesn’t change their historical importance because, at his best or at his most mundane, Ditko remains a key figure in comics. His work, even this work, needs to be available to today’s comics historians and readers.

I recommend Outer Limits to avid Ditko fans and also to those whose interests lie more with comics history in general. Bell is likely limited to reprinting public domain comic books, but wouldn’t it be sell if Marvel and other publishers either granted reprint rights to this dedicated history or published their own volumes showcasing the entirety of Ditko’s work for them? I would happily make room on my bookcases for such volumes. 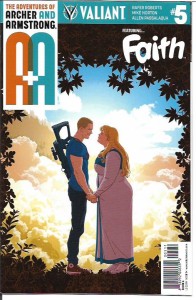 Ever since I started writing comic books, I’ve been extraordinarily fond of what Don and Maggie Thompson deemed “done-in-one” stories. As comic books, especially super-hero comic books, shifted to story arcs and serials, the art of telling a satisfying super-hero tale in one standard-length issue became something of a lost art. While done-in-one comics never faded entirely, they became somewhat rare. These days, when I come across issues that tell a satisfying tale that can stand alone, when those issues are as well done as those I’ll be writing about in this column, I rejoice.

A+A: The Adventures of Archer and Armstrong #5 [Valiant; $3.99] is one such done-in-one delight. It is the story of the first date of martial artist Archer and the super-heroine Faith and I suspect it had me grinning from start to finish.

The current ongoing A+A story has the immortal Armstrong searching for the equally immortal wife he forgot he had. While the friends await new leads, with encouragement from Armstrong, Archer decides to ask Faith out on a date. The two young heroes have had a mostly online friendship for some time. Their date is amusing in places, heartwarming in others and mildly action-packed for the few pages in which they’re attacked by criminals who call themselves the Loan

Sharks and who wear shark costumes that aren’t nearly as stylish as those of Left Shark and Right Shark. Yeah, it’s goofy, but, really, isn’t young love always goofy when you do it right?

The story was written by Rafer Roberts who, assisted by the “What Has Gone Before” content on the inside front cover, does a terrific job making the issue accessible to new readers without being real obvious about it. Penciler Mike Norton provides smooth visuals and storytelling. The human stuff is very real, the super-hero stuff is realistically dynamic. Colorist Allen Passalaqua and letterer Dave Sharpe also do fine work here. This is a swell comic book on every level. I loved it and I recommend it. 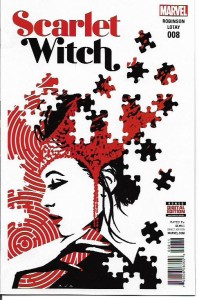 There’s a lot going on in Marvel’s Scarlet Witch. As seen in Doctor Strange and other Marvel titles, magic and witchcraft are broken. In addition, Wanda Maximoff has met her real mother and is trying to learn more about her. However, in the midst of all this ongoing inner turmoil and multidimensional peril, Scarlet Witch #8 [$3.99] by James Robinson with art by Tula Lotay is a downright wonderful done-in-one story of Wanda telling her therapist what’s weighing on her mind lately. There is magic in the story and there is serious self-reflection and there is a surprise which absolutely delighted me for a reason I can’t say without spoiling said surprise. This is a really great comic book.

In a fictional universe laboring under one ill-considered “event” after another, at a comics publisher who routinely uses the deaths of characters as a marketing tool, at a company engaged in childish pettiness over its movie rights, Scarlet Witch #8 is a sensational done-in-one issue. That’s why I’m naming Scarlett Witch #8 as this week’s pick of the week.