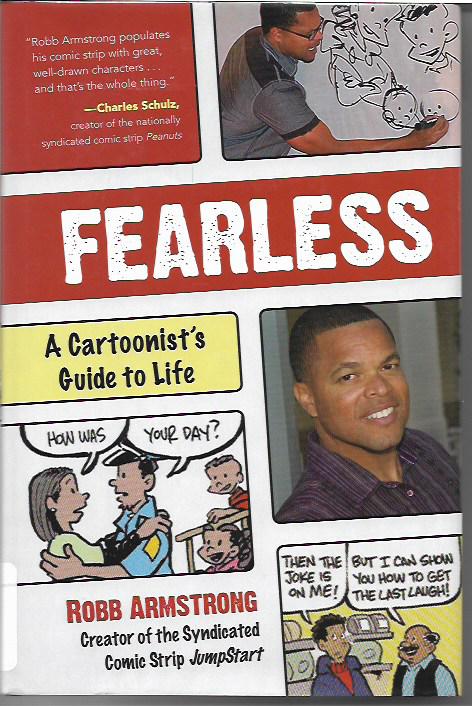 Newspaper comic strip creators fascinate me. They always have, even though the first one I met was a jerk. That fascination grew when, a few years back, I started writing for or other assisting several of them. My admiration for what they accomplish, day in and day out every day of the year, has only grown since then.

Robb Armstrong’s Jump Start, which is about a married couple with kids, is one of my favorite strips. Joe Cobb is a police officer. Marcy Cobb is a nurse. The supporting cast is as likeable as they are. Which wouldn’t mean beans if Armstrong’s writing and drawing weren’t as excellent as they are.

Fearless: A Cartoonist’s Guide to Life [Reader’s Digest; $24.99} is a three-in-one book by Armstrong. It’s a third drawing lessons and a third autobiography and a third life lessons.

The drawing lessons are challenging but not complicated on account of Armstrong knows his craft and is able to explain it in a manner even us non-artist types grasp. Each drawing lesson is followed by a portion of his life story. At the end of each chapter, we get a life lesson combining what we have learned from the drawing lesson with what Armstrong learned (or didn’t learn) at each stage of his life. I was amazed at how well it all ties together.

Armstrong is a person of faith, but his Christianity is truer than most in its acceptance of the world around him. His older brother converted to Islam and Armstrong couldn’t be more complimentary in praising his sibling’s commitment to that faith and how it has made him a better and stronger man. God doesn’t divide us; that’s a job for foolish human beings.

The book also includes a section on art supplies and a gallery of some of Armstrong’s favorite Jump Start strips. Oh, dear, I think I will now have to buy as many traditional Jump Start collections as I can find. I do love this strip.

“Inspirational” is an adjective that gets tossed around a lot, but Fearless deserves to wear it proudly. In the middle of my own very busy schedule, reading this book recharged my energy. Which is why it’s my pick of the week. 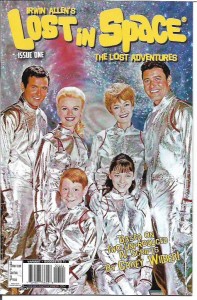 Irwin Allen’s Lost in Space: The Lost Adventures #1-3 [American Gothic Press; $3.99 per issue] features a comics adaptation of “The Curious Galactics,” an unproduced script by Carey Wilber. He wrote several episodes of the TV series, the famous “Space Seed” episode of the original Star Trek and lots of other TV shows in the 1950s through the 1970s. The script was adapted by Holly Interlandi with art by Kostas Pantoulas.

This is huge news for avid Lost in Space fans, but I can’t really include myself in their number. I didn’t hate the show. I was a fan of all the cast members with some of them – Guy Williams, Bill Mumy and June Lockhart – being among my favorite TV stars. I watched the show up to the point where the stories just got too silly for me. Also, I have a vague memory that, at one point, it was scheduled against a show I liked better. Maybe even the original Star Trek.

“The Curious Galactics” is more serious than the later episodes of the series. It involves some aliens – Hey! Wouldn’t the Robinsons be considered aliens out there? – testing John Robinson, Don West and Will Robinson to see if they are intelligent beings as defined by their own emotionless standards. It’s not a bad premise, but it simply isn’t three issues worth of premise. The result is a story that drags to its conclusion.

The writing is so-so as the art. The story’s conclusion is flat and the aliens never quite make sense. The human characters are stiff with faces that often look like they were lifted from a press kit’s photos. When the characters do show some emotion, it’s exaggerated.

If you’re an avid must-have-it-all Lost in Space fan, you will want these comic books. If you’re not, give them a pass. 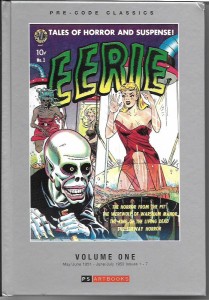 Pre-Code Classics: Eerie Volume One and Volume Two [PS Artbooks; $59.99 and $64.99] reprint issues #1-14 of the 1950s horror comic series from Avon Periodicals. Avon had published a one-shot comic with the same title in 1947, but didn’t begin the ongoing series until 1951. The title ran for 17 issues, but the last three issues were reprints of the first three issues.

Eerie starts off with the usual horror comic fare: werewolves and vengeance-driven ghosts and other undead creatures. The writing is adequate, but only occasionally rises above that. We know Sol Cohen was the editor of the title, but the names of the writers have yet to be uncovered.

Some of the better stories would include issue #2’s “The Thing from the Sea” (art by Wally Wood); “The Stranger in Studio X” from the same issue; issue #3’s “The Mirror of Isis” (art by Joe Kubert); and “Cremation of Evil” from issue #4 (art by Gene Fawcette). More unusual monsters would appear in issue #8: “The Phantom Python” and “The Curse of the Bulaga.” issue #11 would unleash “The Anatomical Monster” while #12 would feature an issue-length adaptation of Bram Stoker’s Dracula. The basic plots of Eerie’s stories are all good, but the execution was mostly journeyman. 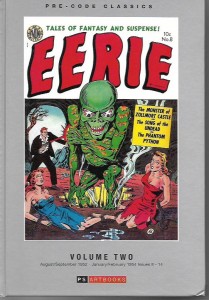 The art on these comics is a mixed bag. There are some first-rate jobs from the afore-mentioned Wood, Kubert and Fawcette, as well as Fred Kida, Louis Ravielli, Manny Stallman, Carmine Infantino (hurt by so-so inking), George Roussos, Harry Lazarus, Everett Raymond Kinstler and Alvin C. Hollingsworth. But there are two many stories by Norman Nodel, Vince Alascia and even lesser lights.

These hardcovers aren’t cheap, but they are way less expensive than if you tried to buy the original issues in decent shape. My usual recommendation is that fans of pre-code horror and historians will want them. Less committed readers will probably want to pass them by. As for me, I’m delighted to have them.

I’ll be back next week with more reviews,