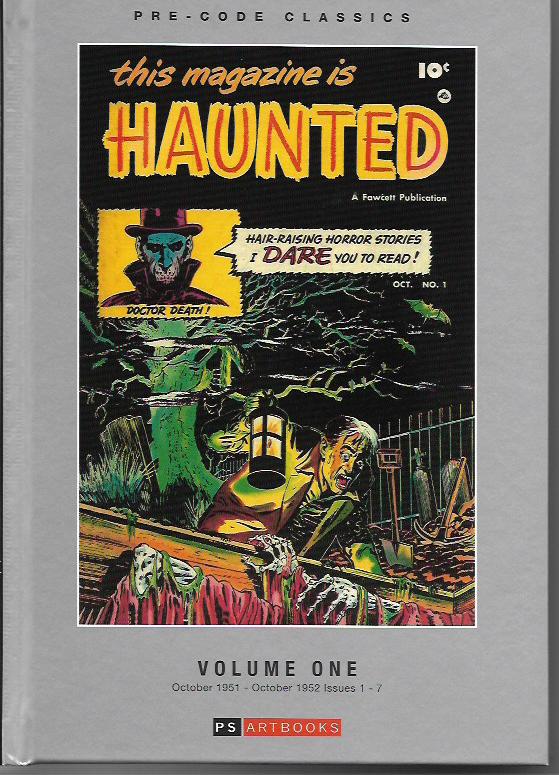 First up this week is This Magazine is Haunted Volume One [$59.99] from PS Artbooks. This was Fawcett’s first supernatural anthology, which the company that gave us Captain Marvel published from 1951 through 1953. When Fawcett got out of the comic-book business, the title was sold to Charlton which continued the series from 1954 to 1956. This volume reprints the first seven issues [October 1951 to October 1952].

The title was created by legendary comics creator Sheldon Moldoff. He pitched it to Fawcett, who initially passed on the very idea of getting into horror comics. EC Comics was more receptive, but, as Moldoff would later say in interviews, EC reneged on a dale to pay him royalties on their horror titles. By this time, with those EC books doing very well, Fawcett took the plunge.

Edited by Will Leiberson and Al Jetter, Haunted never went in for gore. While the stories certainly inflicted some gruesome fates on many of their protagonists, those fates were always depicted with restraint.

The stories themselves were a mix of the usual ghosts and unearthly creatures. There were some tales inspired by the surprise endings of the renowned O. Henry – You probably read his “The Ransom of Red Chief” in school – and some which were influenced by horror movies. The stories aren’t credited, but we know Paul S. Newman wrote for the magazine and it has been suggested Roy Ald also did.

There are some terrific artists on these stories. Besides Moldoff, these included George Evans, Bernard Baily and Bob Powell. There’s also work by the unknown artist which the Grand Comics Database has dubbed “Jokerface” for his habit of drawing minor characters with cartoony elongated faces.

Most of the stories reprinted in this book are, at the very least, readable. Several are excellent. In “The Green Hands of Terror,” a scientist creates disembodied, seemingly sentient limbs that live on after he’s murdered. “The Slithering Horror of Skontong Swamp” deals with swamp creatures. “The Ghost of Fanciful Hawkins’ is as mad a ghost story as I’ve seen. In “The Grim Reality,” which could be my favorite of this volume’s stories, a con man’s manufactured legend comes to life.

Though not as expensive as the original EC horror comics, the first seven issues of This Magazine is Haunted – in merely good condition – would set you back over three hundred bucks. At less than a fifth of that cost, this reprint volume is far more economical. If you’re a fan of comics history in general or 1950s horror in particular, this hardcover volume is a bargain. 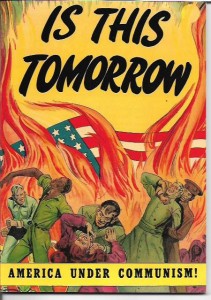 Is This Tomorrow [Canton Street Press; $8.95] is a digest reprint of the legendary anti-Communism comic book originally published by the Catechetical Guild Educational Society. It has been digitally colored and restored by Canton Street Press.

There are politicians and political movements who seek to inspire us to greater achievements and unity. Then there are those who just want to bend us to their will by scaring the crap out of us. This comic book falls into the latter group. It puts forth a series of absurd events, seasoned with extreme paranoia, leading to America crushed under the absolute rule of a Communist dictator. Though I suspect some would disagree with me on this conclusion, the answer to the question asked by the title is…

No. It isn’t. But maybe you’ll have better luck with all the other absurd conspiracies scooting across our national conversations like dogs trying to wipe themselves on the carpet.

There are no credits on the comic book itself, but they came later when the story was reprinted in Catholic Digest. The writers were F. Robert Edman and Francis McGrade.

The artists? The identity of one of them will shock you. Here’s the scoop from the Grand Comics Database:

“Script credits not in the comic, but show up when the story was reprinted over three issues of Catholic Digest (information from Ken Quattro via the Comics History Exchange page on Facebook, posted August 11, 2015).

“Charles M. Schulz pencil, inks, and lettering credits come from Schulz himself in an interview with Shel Dorf, in Comics Interview (Comics Interview Group, 1983 series) #47 [1987], page 15 and in Schulz and Peanuts: A Biography by David Michaelis (Harper, 2007 series), pages 161 and 167, as reported by Jean Paul on the Comics History Exchange page on Facebook, August 13, 2015.

“The artwork for this issue was done by several artists and Schulz’s work is hard to determine. Michaelis states that Schulz drew the climactic panels for the story.”

Whatever my views of this comic book from 1947, I consider it to be historically important. Canton Street Press did a first-rate job restoring it and the smaller size of the reprint doesn’t hurt the readability of the book. If you could find a merely good condition copy of this comic book, it would likely set you back about thirty dollars. Nine bucks seems like a great deal to me. 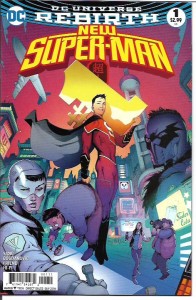 Kenan is a bully who delights in tormenting pudgy Lixin. Kenan is a working-class kid whose mother died in the crash of a commercial jet. Lixin’s father is the CEO of that airline. Kenan knows he is being a creep and struggles with it. When Blue Condor, a villain who terrorizes the rich and powerful, goes after Lixin, it’s Kenan who comes to the boy’s rescue. Before long, Kenan becomes a minor celebrity, is praised for his courage and recruited by some weird scientists to become a super-hero.

When I read this issue, I felt some of the thrill I felt when, as a kid, I would read the first issue of a new super-hero comic book. I love that it’s set in Shanghai. I love the conflicted characters. I love the conspiracies swirling delicately in the background. This is a well-written comic that looks great and flows well. It could be the Firestorm or Nova of a new generation.

New Super-Man #1 is my pick of the week.