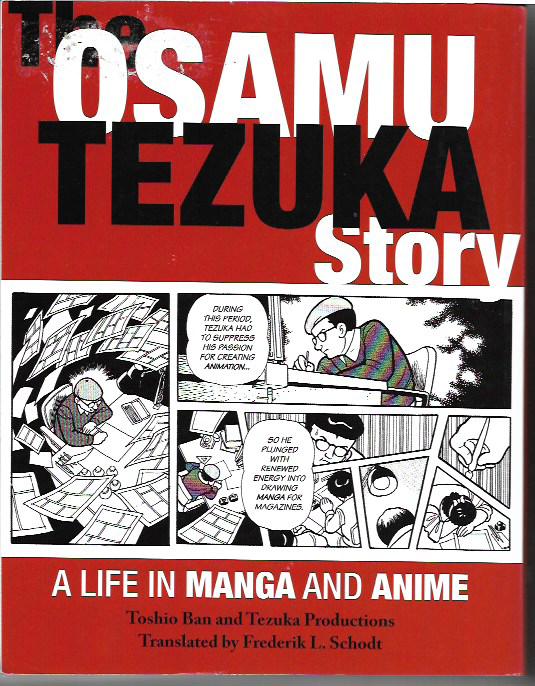 Who has time to read a nearly 900-page graphic novel biography of a comics creator? You do.

Make time to read The Osamu Tezuka Story: A Life in Manga and Anime [Stone Bridge Press; $29.95]. If you love comics, you should make time to read the life story of one of the greatest – and, arguably, THE greatest comics creator of them all. If you make comics, then you must make time to read a biography that will amaze and inspire you. That is the power of this book.

You might have watched Astro Boy or Kimba the White Lion when you were a kid. Those are only two of the almost countless characters created by Tezuka. The list of Tezuka works – manga and anime – is almost countless. He was a pioneer in nearly every genre and type of Japanese comics. He was a pioneer in animation, commercial and experimental. He was Walt Disney and Jack Kirby and Stan Lee rolled into one unbelievable talent, a man who earned and deserved to be remembered as the “God of manga.”

While reading this book, I was frequently overwhelmed by how much Tezuka accomplished in his too-short sixty years of life. He would write and draw over 300 pages of manga in a month and repeat that in more months than seems humanly possible. Yet, despite all that production, Tezuka’s commitment to quality and innovation was not compromised. He brought his “A” game to every game.

An aspect of Tezuka’s body of work that amuses me far more than it would have amused his editors is how they would hunt him down when he owed them pages and how they, editors from rival magazine, would sit patiently outside his studio waiting for him to finish each of his stories one by one. These editors would literally live at the studio for days at a time.

In a recent dream, I imagine myself, whose own multiple commitments would probably strike Tezuka as a good afternoon’s work, listening to multiple editors in my head. I try to make them comfortable in my noggin. I might be more annoyed that they are. Dreams are funny things, aren’t they?

Yet dreams were Tezuka’s stock in trade. Visions of times past and times to come. The world and especially the world of comics is so lucky to have those dreams.

The Osamu Tezuka Story: A Life in Manga and Anime is by Toshio Ban and Tezuka Productions with translation by Frederik L. Schodt. It’s my pick of the week. No comics reader should be without it. 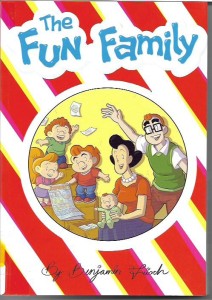 Benjamin Frisch’s The Fun Family [Top Shelf Productions; $24.99] forced me to ask myself this question: Can I praise the effort that went into and the quality of a graphic novel while finding the work itself revolting? Let’s see.

Frisch’s graphic novel debut is a mean-spirited deconstruction of Bil Keane’s immensely popular newspaper feature The Family Circus. There appears to be something about such popular comic strips that enrages the sensibilities of younger cartoonist. Normally, it takes the form of “If only the newspapers would drop these features that readers have enjoyed for decades, then my comic strip would become successful I would receive the acclaim I deserve simply because I want it. But, in the case of The Fun Family, the intent is to smear and debase dopplegangers of Keane’s beloved characters.

Using a style akin to Keane’s, Frisch drags his characters through an emotional hellscape. Mom leaves the family to have a succession of sordid affairs with her manipulative psychiatrists. Between the death of his mother and the discovery by his eldest son of a room full of porcelain statues representing a more loving family, Dad is a basket case. As Mom moves out with the two kids she likes best, the son has to take over Dad’s comic strip, take care of what is left of their family and, oh, yes, even pay the psychiatrists who are having sex with his mother. His sister becomes a religious nut whose faith revolves around her late grandmother. Before long, the little girl has started a virtual cult.

So I guess the answer to my question is: I can’t. 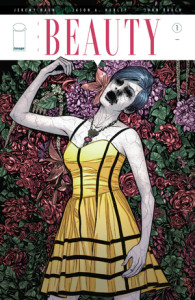 The Beauty Volume 1 by writer/artist Jeremy Haun and writer Jason A. Hurley [Image; $9.99] is a horror/medical/sci-fi thriller with a high concept to die for. Literally.

Our beauty-obsessed modern world is hit with a sexual-transmitted disease that makes its victims beautiful. Which sounds pretty good until those victims spontaneously combust. A corporation has a cure for the disease, but is holding off on releasing it in a quest for obscene profits.

Two detectives battle corrupt politicians, murderous agents of the corporation, arrogant federal agents and the anti-beauty movement to expose the threat and end it. Haun and Hurley give us heroes we can root for, ordinary people caught in the lies and secrets of the rich and the powerful and some downright scary villains. The story and the visual storytelling are first rate…and this book has such a satisfying ending that I have no idea what they are planning for the second volume.

I recommend The Beauty. It’s a keeper.