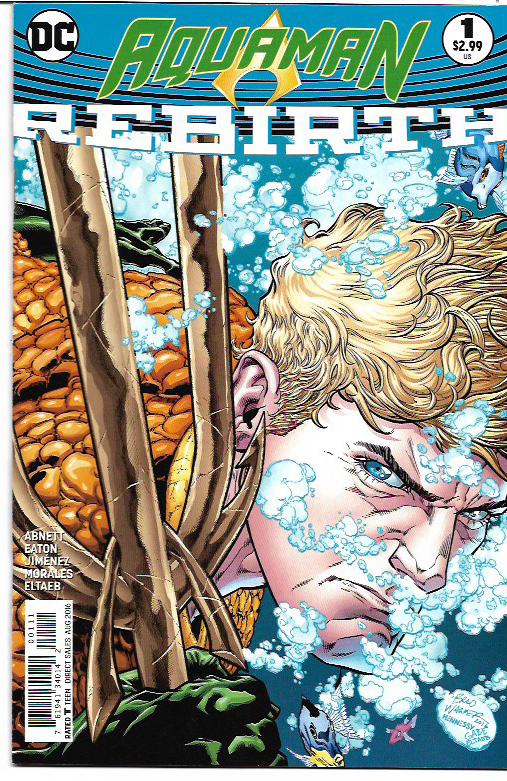 I’ve already received quite a bit of response to last week’s piece on DC Universe Rebirth. The friends and readers who have spoken to me are optimistic in generally and intrigued by some of the wilder things that have happened in these initial issues.

There are those fans who want DC comic books to be exactly like the DC comic books they read when they were twelve or exactly like the DC comic books were before Crisis or after Crisis or…you get the picture. What’s embarrassing for me as an older reader – I’ll be 65 in December – is how these fans cling to the past. Those great old comics are still there. You can always read them in the originals or in the many wonderful collections DC and other publishers have been putting out for decades. But to expect comic books, even those published by major players like DC and Marvel, to remain exactly as they were decade after decade, is delusional.

My take on comics continuity reflects my views on the longevity of popular characters and universes and the telling of great stories for readers old and new. What’s most important to me are the core values of the characters. If those are present, everything else is up for grabs.

Is there something in past continuity that is dated or just plain dumb? Ignore it. Really. Just pretend it never happened. Don’t do a six-issue arc explaining it or explaining it away. Just – and you can use your best mobster impression here – forget about it.

Can a writer revisit a character and make improvements in how he or she formerly envisioned the character? Of course they can. The only constant should be the commitment to quality writing and those core values mentioned above. When I return to comic-book writing in the near future, these are going to be my guiding philosophies. I hope the readers who have enjoyed my work in the past will like my new work even more.

Philosophy aside, here’s some comments on some of the “DC Universe Rebirth” comic books I’ve been reading…

Aquaman Rebirth #1 [$2.99] was a mixed bag for me. It had elements of which I’ve become weary, notably Black Manta and the seemingly endless Atlantean political disunity. I get more than enough of the latter from the evening news. As for Black Manta, he’s become the go-to-villain for Aquaman. While understandable, he’s been gone to too many times for my tastes. Give him a rest. Especially since his plans seem to bode ill for Mera. Sixty-five years of life and over thirty years of glorious marriage to a terrific woman has be less than enthusiastic over the whole “woman in jeopardy” bit in comics. Especially since Mera could certainly kick Black Manta’s ass before breakfast.

Aquaman also had elements I liked very much, especially the strong love between Mera and the title hero. Again, I point to my decades of happy marriage. There should be comics for folks like me, too.

Aquaman has great power and enormous responsibilities. That’s also on display in these initial Rebirth issues. Let his acceptance of and successful carrying out of those responsibilities play a major role in future issues – Should I mention that I enjoy super-heroes winning clear-cut victories over villains? – and I’ll be hooked on Aquaman. No fishing pun intended. 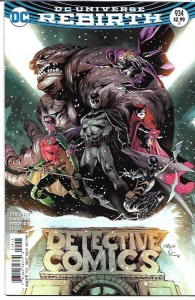 Detective Comics #934 [$2.99] won me over with the saner-than-he’s-been-in-years Caped Crusader putting together a team of heroes that are more than cannon fodder for his obsessions. Inviting Clayface to be part of the team is brilliant and uplifting. Batman has often played lip-service to believe his foes can find redemption. Here, he’s actively working towards that end. I hope it sticks with the tragic Basil Karlo, says the guy who hated, absolutely hated, when Marvel Comics reformed the Sandman and than took that great bit of character development away from us.

It seems like The Flash will be pivotal to whatever is happening in Rebirth, which seems fitting since it was his actions that led to Flashpoint and the New 52. I haven’t been knocked out by the first couple of issues, but I’m keeping an open mind. I don’t want to see the legion of super-speedsters we’ve gotten over the years, but I could live with a few. 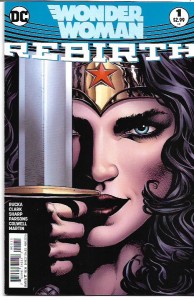 Wonder Woman Rebirth #1 [$2.99] did knock me out. I love the idea of Wonder Woman realizing her life has been altered over and over again.  It’s audacious and intriguing for the title to look at those clumsy continuity missteps squarely in the eye and try to sort them all out. If you’re asking for my votes, I would recommend ditching the dark mess that was the New 52 version of the character and give us something powerful and uplifting. Not because the lead character is a woman but because she’s Wonder Woman. I want a hero I admire and love as much as I admired and loved Lynda Carter in the live-action TV show and as much as I admired and loved the Wonder Woman in the Justice League and Justice League Unlimited cartoons. Wonder Woman should be a hero for both the ages and for all ages.

As more Rebirth titles cross my path, I’ll doubtless return to this conversation. In the meantime, I’ll be back next week with reviews of other things. See you then.