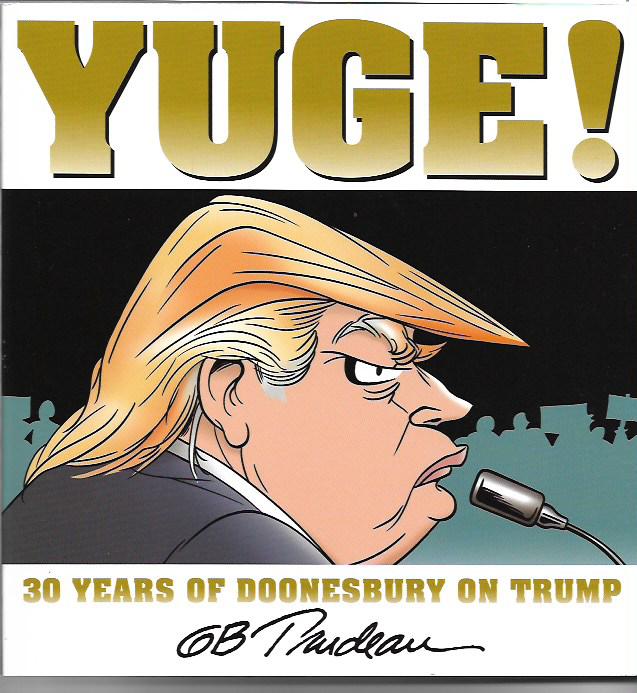 Donald Trump is now officially the Republican Party’s candidate for President of the United States. If you’ve been reading my columns for any length of time, you probably have a pretty good idea how I feel about that. Which means I don’t have to take up any precious space explaining how I feel about it. I’m as relieved that I don’t have to do that explaining thing as much as you’re relieved I’m not doing it.  However…

What I am doing is alerting you to the recent publication of Yuge!: 30 Years of Doonesbury on Trump by G.B. Trudeau [Andrews McMeel Publishing; $14.99]. How does the Donald feel about being portrayed in the Doonesbury comic strip? Well…

The back cover of this 112-page trade paperback features “Selected Comments from Donald Trump.” The comments start with “Doonesbury, Doonesbury! Everybody’s asking me to respond to Doonesbury! People tell me I should be flattered.” The comments conclude with “A total loser!”  In between, we get comments that are positively benign when compared to Trump’s usual rhetoric.

Trudeau’s interest in Trump started with the Donald’s first trial Presidential balloon in 1987. The cartoonist struck comedic goal, so he continued to use Trump from time to time. At one point, Uncle Duke, the former Rolling Stone writer kinda sorta based on Hunter S. Thompson, was Trump’s muscle and tasked with acquiring property from reluctant owners.

While there’s nothing in this collection flattering to Trump, there are many of the keen satirical insights that made Doonesbury one of the finest comic strips of all time. As such, it’s a valuable book on multiple levels. First and foremost, it is a terrific gathering of great comic strips. It’s also a fine example of political satire in the comic strips. And it’s a reminder that we should have seen Trump coming a mile away. He was just waiting for the angriest and most intolerant of his fellow citizens to catch up with him.

Yuge!: 30 Years of Doonesbury on Trump is a remarkable collection. I recommend it to all. 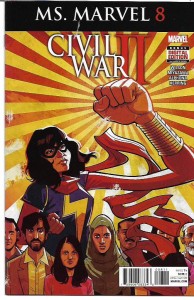 Ms. Marvel #5-8 [Marvel; $3.99] are, collectively, my pick of the week. I am also ready to officially declare that Ms. Marvel is my favorite Marvel title.

If you’ve somehow managed to miss the generally positive press on this character, Kamala Khan is a teenage Muslim girl who lives in Jersey City. When she was exposed to the Inhumans’ Terrigen Mist, she got super-powers. She became a super-hero and, in short order, a member of the Avengers. What makes Kamala so delightful for me is how writer G. Willow Wilson manages to combine super-heroics with real-life issues and teen life.

Kamala is stressed by the many facets of her life and the secrecy surrounding them. She feels the weight of family obligations just as strongly as those of her super-hero life. She experiences teen romance for the good and the bad. She tries to think before using her powers. She sometimes trusts authority figures too much. It’s a winning combination for me.

In these most recent issues, Kamala’s stress levels have been off the charts with her brother’s marriage vying for her attention as she deals with school and super-hero stuff. She’s also had to deal with the first stages of Marvel’s latest crossover event: Civil War II. Which I’ll describe as briefly as possible.

A new Inhuman has the power to rip off Minority Report. Excuse me, the power to see the future and, theoretically, prevent crimes and tragedies before they happen. Of course, this kind of sort of means the heroes who buy into this as a good thing will be arresting and otherwise violating the civil rights of individuals who have yet to commit an actual offense.

Captain Marvel, who Kamala respects tremendously, is on the side of civil rights being too inconvenient to bother with. Kamala follows her lead, but quickly has doubts about the situation as she quite correctly compares this to racial profiling. Issue #8 brings this into focus with a dynamite last page that really does make me want to see what happens next.

Ms. Marvel is available in several hardcovers and trade paperbacks. I recommend them all. 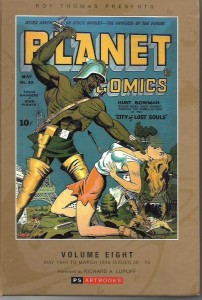 It’s been a while since I’ve written about the Planet Comics books published by PS Artbooks of England. When last we spoke of them, I cautioned the initial years of this 1940s Fiction House title were mediocre at best. Sure, there were some ideas so bizarre that they were kind of fun. Sure, there was some of the early works of comics artist we now revere. But, all in all, these were not the cream of the comic-book crop.

With Planet Comics Volume Eight [$59.95], we’re getting more good stuff that not-so-good stuff. This hefty hardcover reprints Planet Comics #30-35 [May 1944 to March 1945]. The book also includes an informative intro by noted comic-book fan/historian and science-fiction author/fan Richard A. Lupoff. But, as always, the stories and art are the real draw.

“The Lost World” is rolling along nicely. Hunt Bowman and his high-heel wearing friend Lyssa are surviving on an Earth devastated by an alien invasion and fighting the vile Volta Men. The adventures are entertaining with art by such notables as Graham Ingels before he was deemed “Ghastly” and Lily Renee.

Artist Joe Doolin does fine work on “Mars, God of War.” The title character possesses the bodies of the human du jour – men and women – are uses them to foment war. The spectral sociopath is thwarted by a succession of brave men and women. In the last “Mars” story of this volume, he is opposed by the remarkable Mysta of the Moon. She will soon boot the God of War from his own feature.

The wacky “Norge Benson,” which features a bear as the hero’s main sidekick, is also fun. Alas, this book reprints the last stories of the feature.

The remaining series are basically assorted space cops and robbers. Some of the stories are good, some are mediocre, a few are simply awful. We don’t know who wrote the stories, but the artist roster includes Fran Hopper, George Tuska, Lee Elias and some of the first work of the legendary Murphy Anderson and Joe Kubert.

These Planet Comics volumes – I’m running four or so volumes behind in reading them – won’t be for every comics reader. I get them for two reasons. First, I’ll purchase just about any reasonably-priced collection of comics from the 1940s or 1950s. Second, these books bring back fond memories of my late friend Dave Massaro, a gifted teacher who loaned me his original copies of Planet Comics issues because he thought they would inspire my own writing. I’m looking forward to reading the remaining volumes of Planet Comics. We will probably talk about them again.