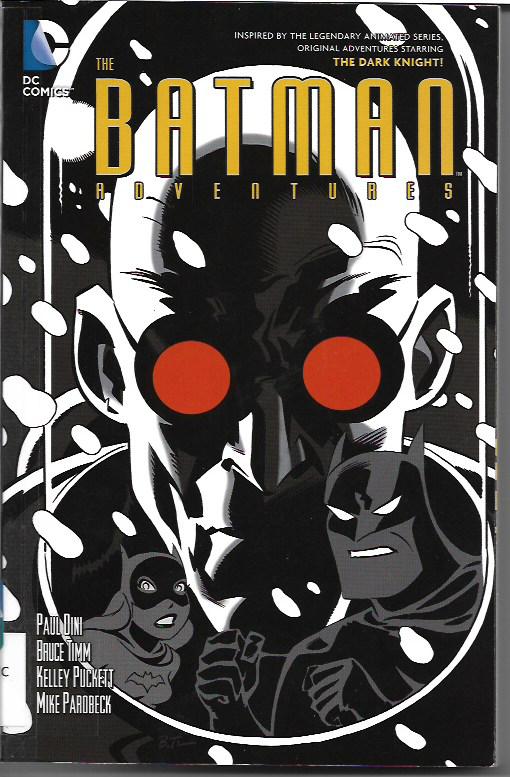 The Batman Adventures Volume 4 by Paul Dini, Brice Timm, Kelley Puckett, Mike Parobeck and others [DC Comics; $24.99] is my pick of the week this time around. Just as Batman: The Animated Series is my favorite movie or television incarnation of the legendary hero, the comic book based on that series is one of my all-time favorite Batman title. In the mid-1990s, when these stories first appeared, it was common for comics fans to deem the series the best current Batman title.

The Batman Adventures Holiday Special #1, which is included in its entirety in this volume, is a comics collaboration between writer Dini and other members of the animated show’s creative staff. The anthology features Batman, Batgirl, Clayface, Harley Quinn, Poison Ivy, Mr. Freeze, the Joker and Commissioner Gordon. Each short tale is complete unto itself with a satisfying ending. Especially choice are a melancholy Mr. Freeze story and an action-packed Joker tale. But there’s also much to be said for the sight of Harvey Bullock as Santa Claus and Renee Montoya as his elf.

Puckett has several great stories in this trade paperback. One is an epic three-issue adventure in which Batman/Bruce loses all of his adult memories. Another is a wry comedy in which Mastermind and his two criminal compatriots are smack in the middle of a quest for a fantastic pearl. Ty Templeton pens a moving yarn of Bruce Wayne’s romance with a single mother that caught me smack dab in the heart.

The collection concludes with a sprawling 44-page thriller in which the Batman joins forces with the Demon to stop Ra’s Al Ghul’s mad plan to wipe out most of humanity. This tribute to Jack Kirby was by Dini with co-plotters and artists Timm and Glen Murakami. This book is over 250 pages of some of the very best Batman comic books of the 1990s.

The Batman Adventures Volume 4 is suitable for all ages. If you’re a Batman fan, a connoisseur of great comics, someone looking for a gift for a Batman fan, or, especially, the book buyer of a public or school library, you should buy this book. You should also buy a copy for yourself. Because you’ll want one. 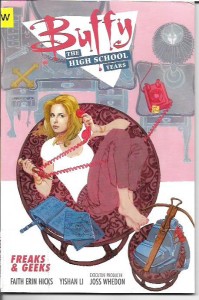 Buffy: The High School Years – Freaks & Geeks by Faith Erin Hicks with artist Yishan Li [Dark Horse Books; $10.99] takes us back to our stake-wielding heroine’s first year at Sunnydale High School in Hellmouth, er, I mean Sunnydale, California. To put it another way, this compact [80 pages, 6″ by 9″) graphic novel is set during the first season of Joss Whedon’s wonderful Buffy the Vampire Slayer TV series, which was must-watch television at my house.

Hicks takes us back to when Buffy was still making the adjustment from most popular girl at her former high school to outsider at her school. Her friendships with Willow and Xander are still new, both for the Slayer and her friends. Her tutelage under Giles is just as new with the reserved watcher starting to become more than just her instructor in the ways of vampire-slaying. All of them have doubts about these new relationship, which Hicks uses to great effect in this story.

Nerdy vampires. Four students who were abused in life and who are still dismissed by cool vampires in their undead existence. Just as desperate for attention as in their former lives, the four figure killing the Slayer will gain them immediate entrance to the coolest of the cool vampire ranks. They play on Buffy’s doubts, something common to high school students and, indeed, most of us throughout our lives. This adds the kind of emotional element to the vampire-slaying seen in the best episodes of the TV series and the best of the Buffy comic books over the years.

The highest compliment I can pay Freaks & Geeks is that I could see it as a first-season episode of the TV series. It captures all of the angst and wonder of that first season. It feels like the show. It would have made for a memorable episode. 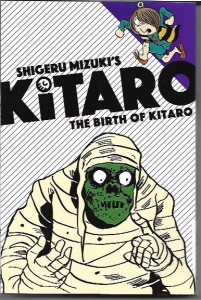 Add Shigeru Mizuki’s Kitaro to the list of manga characters I love. Kitaro is a one-eyed boy with supernatural powers, the last living member of the Yurei Zoku. This “Ghost Tribe” used to roam our world until the growing numbers of humans chased them underground. But there are other creatures and ghosts bedeviling modern-day mankind. The answer to the question of who they gonna call when that happens is…Kitaro.

The Birth of Kitaro [Drawn and Quarterly; $12.95] is the first in a series of volumes reprinting the earliest Kitaro adventures from the 1960s. Mizuki draws on Japan’s countless legends of ghosts and other fearsome things for his stories, but the horror is lightened with humor and wacky characters. Neko Musume is a good example of those characters. He’s an unrepentant con man monster who is kind of sort of Kitaro’s friend. Kitaro also kind of sort of has more the one eye. His late father’s sentient eyeball lives in his son’s empty eye socket and often helps his son out of jams.

Mizuki has a crisp to-the-point style in both his writing and his art. This first volume has seven done-in-one stories, the opening part of a prose feature on the history of Kitaro plus a section of “Yokei Files” on the things that dwell in Kitaro’s world. That’s a lot of fun and suitable-for-all-ages content.

Kitaro Meets Nurarihyon, the second in this seven-volume series, will be published in October. If you read this first volume before then, you’ll be awaiting each and every volume as eagerly as do I.

The Birth of Kitaro